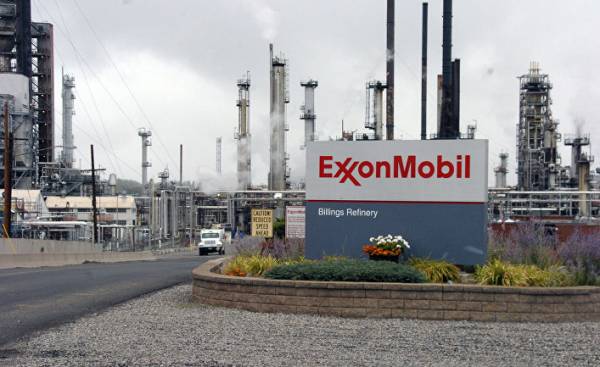 According to the Wall Street Journal, Exxon Mobil has appealed to the Ministry of the Treasury with a request to allow her to act in circumvention of the sanctions against Russia.

An exception to the sanctions regime would allow Exxon to resume the project in partnership with Russian oil giant Rosneft.

A company representative declined to comment on “current issues.”

But there are pretty good reasons why the Houston ExxonMobil would like to resume business with the state oil company: is their agreement to establish a joint venture, signed in 2011, allowed Exxon to develop deposits on black sea shelf and the Kara sea.

According to news Agency S&P Global Platts, undeveloped oil fields are considered the most promising in the Russian Arctic.

In 2012, the two companies have agreed to jointly develop oil reserves in Siberia and the establishment of a research centre in the Arctic.

In 2013, plans were agreed to build a large plant for the extraction of natural gas around Vladivostok in Eastern Russia.

However, the deepening cooperation was frozen after 2014, the United States, European Union and other Western countries have imposed sanctions against Russia for its role in the crisis in Ukraine.

Exxon, which operates in Russia for more than 20 years, was allowed to finish some of my projects. But then the drilling was stopped.

Since then, much has changed. The Russian economy has overcome the crisis and in the last quarter of 2016 emerged from a painful recession.

The price of oil once again climbed to above $ 50 per barrel.

Nevertheless, Exxon, the request for an exemption to the sanctions regime is a serious political maneuver.

The administration of the trump is in the center of attention because of its ties with Moscow. And the fact that the current Secretary of state Rex Tillerson (Rex Tillerson) during his tenure as Director of the company Exxon was the initiator of the transaction with Rosneft, attracts the exemption request from compliance with the sanctions regime more attention.

Tillerson recused himself, refused to participate in the resolution of issues related to Exxon. In addition, he has sold all of its assets in the company and puts its shares, which it would have received in over the next decade, in an independently administered Fund.

But, apparently, the brewing political storm.

Adam Schiff (Adam Schiff), the second-highest Democrat in the house of representatives Committee on intelligence, said that the request of the company an exception from the sanctions regime must be rejected.

“The Finance Ministry should reject the request for exemption from compliance with the sanctions regime, which would allow the company Exxon Mobile or any other company to resume business relations with Russian companies under sanctions, he said in a statement. — Until Russia complies with the Minsk agreements and cease their illegal occupation of Crimea, the only change in the sanctions should be tightening, not easing”.

And yet, in terms of Russia, the financial incentives are for Exxon big value.

In March 2016 Tillerson stated that Exxon “really wants to resume work there”.

This desire was confirmed by his successor.

“We are working in Russia already for a long time,” — said in February in an interview with Forbes magazine CEO Darren woods (Darren Woods).