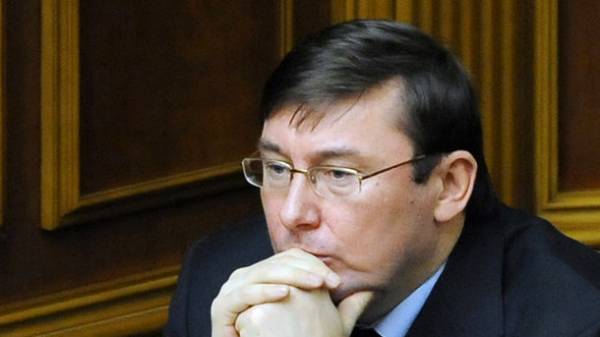 Looking back, “Today” has remembered the loudest successes and failures of the fifteenth on account of the Prosecutor General of Ukraine.

FISHING WITHOUT EXPERIENCE. “Well, even without experience and education! The main thing that man was good”, — joked the Ukrainians in the network after the appointment of Lutsenko. He, we recall, has no legal education (Lutsenko — electrical engineering), which was previously a prerequisite for work in the GPU. In General, the purpose became one of the most resonant events of last spring: in just a few hours after the adoption of the law “ground” specially under Lutsenko (allowed to run the GPU without professional education), the document was signed by the President and published in the special issue of “voice of Ukraine”. And the evening of the same day, the Parliament endorsed the appointment of the new head of the GPU. During the first communication with the press Lutsenko admitted that he did not intend to hold this position for more than two years: “Neither in the soul nor in life I’m not a Prosecutor and would like to keep it moving, because I have other views on life.” A month later he publicly stated about their main priorities in the face of the attorney General: “the First is the condemnation of Yanukovych, the second — the completion of cases on the Maidan and return to the budget “Family”. In addition, Lutsenko promised to start “big fishing on the big fish” and restore the people’s confidence in the Prosecutor’s office, calling his Agency the “General cemetery”.

MEDIAPROCESSOR. Experts say that Lutsenko is the most politically active media and the attorney General for all the years of Ukraine’s independence. “He is not so much the attorney-lawyer, as the attorney-politician. This unique specificity of Yuri Lutsenko in his post,” says politekspert Vadim Karasev. According to him, one of the main achievements of Lutsenko as the Prosecutor, the confiscation of $1.5 billion of the fugitive President Viktor Yanukovych and his entourage. Recall that these funds have already been transferred to the State Treasury service and the Ministry of Finance. “I have noted a General trend for a significant strengthening of the work of prosecutors in high profile cases with political overtones. And this is largely the merit of the Lutsenko — before it we saw a very sluggish, slow and ineffective work in this direction”, — said political analyst Volodymyr Fesenko.

But the process of “purification” of the Prosecutor’s office, according to experts, is still controversial. For example, a success Lutsenko, in their opinion, was the launch of the database of questionnaires honesty of the prosecutors. Annually employees of GPU, local and regional prosecutors must file a special form with your income and expenses, data of which can give grounds for an official investigation. However, over the past year from 12.5 million prosecutors have already been prosecuted… three. “There were expectations that Lutsenko will restore the credibility of the prosecution and her credibility. But this has not happened yet. Perhaps due to the fact that leaders escaped NABOO and other anti-corruption bodies”, — said Karasev.

In turn, the head of the Center of counteraction of corruption Vitaly Shabunin recalls controversial personnel decisions Lutsenko. “The Prosecutor General appointed a Prosecutor ATO Konstantin Kulik, Deputy head of the Department of international legal cooperation of the GPU. In October, SAP sent the case Kulik, who is suspected of illicit enrichment, to the court,” — said Shabunin.