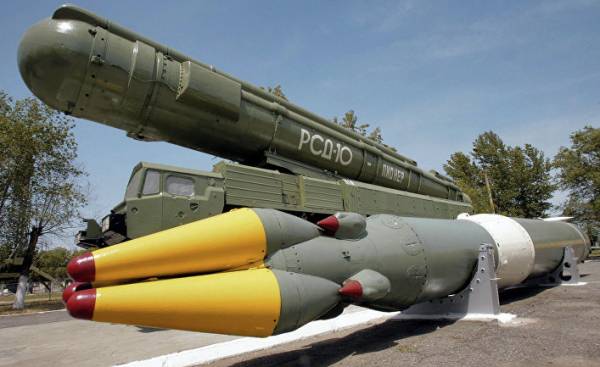 In July 2014, the United States said that Russia violated Agreement on the elimination of intermediate and shorter-range missiles signed in 1987, conducted tests of cruise missiles, ground-based (CMB) with a range of 500 to 5,500 kilometers.

Despite years of diplomatic efforts of the Obama administration, Russia has not demonstrated willingness to begin again to abide by its terms. Despite the weight of evidence provided by us intelligence, the Russians continue to pretend that illegal missiles simply does not exist.

As reported by the New York Times in February, now Russia deploys new krnb in the West, increasing the threat to US allies and American forces in Europe.

Although we continue to prefer diplomatic efforts to convince Russia of the necessity to comply with the terms of the Treaty on the elimination of intermediate-range and shorter-range, now is the time for resolute and proportionate response to violations of Russia. The response must counteract all the strategic advantages that Moscow hopes, and to preserve the integrity of our most important alliances.

This Treaty is not just a bilateral agreement between the US and Russia, but also the cornerstone of security and stability of our allies in Europe and Asia. Therefore, our response should be developed in close cooperation with our allies — particularly our European allies through NATO. We need to convince our NATO allies to share the burden of the response.

From the diplomatic point of view, we can most effectively preserve the unity by taking measures in accordance with this agreement, proving thus that Russia continues to be responsible for all violations.

Russia had an opportunity to legally withdraw from the Treaty, but she decided not to do it — for example, the United States formally withdrew from the anti-ballistic missile Treaty in 2001. Instead, Russia decided to violate the Treaty in secret, hoping to avoid the political consequences that would entail the official release. But she got caught. And we have no reason to let her get away with it.

There are several effective measures we can take. First, the administration must accelerate the modernization of U.S. strategic delivery systems nuclear weapon, in particular it concerns a new nuclear cruise missile air-launched long-range (LRSO).

Second, we and our allies must improve our usual methods of strikes from air and sea. The United States should develop non-nuclear variant of the LRSO, which can deliver non-nuclear warheads in the presence of systems implement the defenses.

We must help our allies to improve their conventional means of strikes from air and sea, to organize the sale of the missiles “air-land” with inertial satellite-guided and IR-guided extended-range and cruise missiles “Tomahawk”.

Thirdly, we should remind Russia that NATO is a nuclear Alliance, with the capacity and the political will to confront the nuclear threat posed by illegal Russian cruise missile. At the summit in Warsaw in July last year, NATO leaders agreed to adopt a series of measures to increase the combat readiness of NATO forces.

NATO should implement all of these initiatives and to ensure that Moscow has no illusions about the fact that it can cause a limited nuclear strike “de-escalation” of conventional military conflict.

Fourth, the US and NATO needs to deploy a limited defense system to counter cruise missiles to protect key objects of the Alliance in case of conflict with Russia, which will reduce the efficiency of the Russian illegal krnb. However, we should redirect our ballistic missiles against Russia (and to take them from Iran and other middle Eastern threats). It will cost us dearly and it will be technically very difficult, and can also undermine our strategic stability.

All of these steps we can make without violating the terms of the Treaty on the elimination of intermediate-range and shorter-range and start-3, and using already existing tools and programs. We do not recommend USA to develop and deploy their own krnb medium-range to withstand the abuses of Russia.

Besides the fact that their development will require very large financial and time costs, the US decision to deploy KRB medium-range missiles in Europe can cause a powerful political resistance, as it was in the early 1980-ies, and to give Russia another reason for violations. The needs of the armies of the United States and its allies can be satisfied by cruise missiles launched from air or sea without raising the risk of political confrontation.

We also recommend not to withdraw from start-3 and the other agreements on arms control in response to Russia’s violations of the Treaty on the elimination of intermediate-range and shorter-range. Russia continues to fulfil the requirements of the start-3. Further implementation of the requirements of this contract is included in the list of national interests of the United States, and the US unilateral withdrawal from the Treaty will cause alarm among our allies.

If you have any questions regarding the conditions of the start-3, they can be addressed through mechanisms spelled out in the contract.

Alexander Vershbow, a senior researcher of the Center for international security name of Scowcroft Brent (Brent Scowcroft Center on International Security) at the Atlantic Council. He served as U.S. Ambassador to NATO (1998-2001), the Russian Federation (2001-2005) and in the Republic of Korea (2005-2008). From February 2012 to October 2016, he was assistant Secretary General of NATO.

Frank rose — visiting senior fellow, Center for international security behalf of Brent Scowcroft at the Atlantic Council. He was Deputy Secretary of state for arms control, verification and compliance with agreements (2014-2017). From 2009 to 2014, rose was a Deputy assistant Secretary of state for space and defense policy.