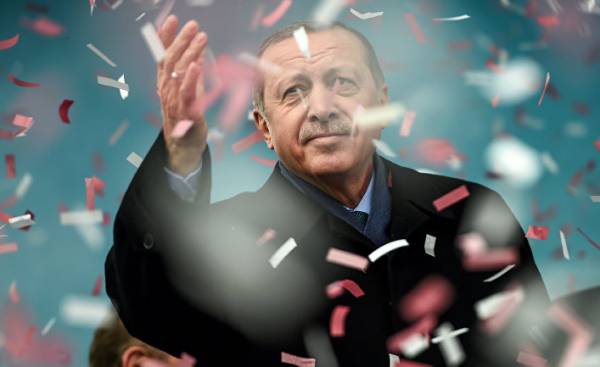 A referendum on 16 April dealt the final blow to the international legitimacy of Erdogan.

The first blow was followed by the events in Gezi.

The second occurred against the backdrop of a shocking mass dismissals, arrests and intensified repression against the press after July 15, 2016.

The last blow was recorded for all the world to see the messy result of the “regime referendum” held under a state of emergency.

About this large-scale erosion of the New York Times writes: “the legitimacy of the Erdogan’s more staggered on the background of allegations by international observers of violations during the voting.”

For several hours following the statement of the Supreme election Council “the ballots without the seal” and “miserable victory”, the world leaders into silence.

Erdogan, who probably amused themselves with illusions in the spirit of “already too late” first “congratulated” only Azerbaijan, Qatar, Bahrain, Guinea, Djibouti, Pakistan.

The EU has confined itself to saying: “We are waiting for the report of the OSCE!”

Merkel vaguely mumbled something like “the results show that the Turkish nation is divided”.

And call trump followed all through the day. When Erdogan enthusiastically announced the call for CNN International, the White house had made a statement which had the effect of a cold shower: “the purpose of the conversation was the discussion not the results of the referendum, and General topics such as Syria. For the sake of US interests, we must work with certain countries”. (That is, doom?)

Our and your will always request

What does it all mean? What does this deafening silence, a statement that can be interpreted in two ways, dance steps with swing head and a curve in their lower back?

We know that Trump absolutely nothing to “democracy”. If this were not so, then al-Sisi would not have been one of the first Muslim leaders, whom trump took the White house…

Trump after the referendum, obviously, does not want in the middle East chess to give Putin Ankara.

The extent to which the important struggle that goes on between Moscow and Washington due to Turkey, we can understand that Putin also called Erdogan soon after the trump.

So, on the one hand, the OSCE statement in which the referendum was openly called the “questionable and far from legitimacy.” On the other hand, the leaders of the world who say: “our And your will always request”.

“The problem of legitimacy” of the referendum April 16, obvious to all, but all international players except for the OSCE at present, or staring at the ceiling, whistling, or watching the steps each other.

Trump and Putin on the one side… Europe, on the other…

Trump will split the EU with Erdogan?

International order is now in the face of such uncertainty, that there are even suggestions that trump made his move with a phone call to Erdogan to divide a Europe that is more sensitive to the issue of democracy.

Proponents of this perspective believe that trump is using every opportunity, contributing to the fragmentation of the EU, especially Brakcet, will not refrain from using Erdogan for this purpose.

In the European public opinion there are different opinions.

There are conservatives who are, almost without aspect of “legitimacy,” saying: “Turkey under Erdogan has long become a middle Eastern country. What else should we expect? Let’s think about our interests.” Is left, which unlike the business community, investing in Turkey attach great importance to the fight 49% for democracy in Turkey and take it seriously.

I finished the section of the article, which left one famous Italian politician Piero Fassino (Pierro Fassino) wrote in the newspaper “Unita” called “We are indomitable and democratic Turkey”:

“We need to know that this struggle concerns not only Turkish citizens. Just look at the geopolitical position of Turkey, to understand how this country is important for the stability of Europe, the Mediterranean and the Middle East. The EU has a responsibility for this country. Turkey, which does not bend the neck in front of the autocracy that wants to live in a free, secular society based on democracy and the rule of law, which directs their gaze on Europe, is not a small minority, and half of the vast country. It is our duty to stand on the side of Turkey and not to leave her alone”.