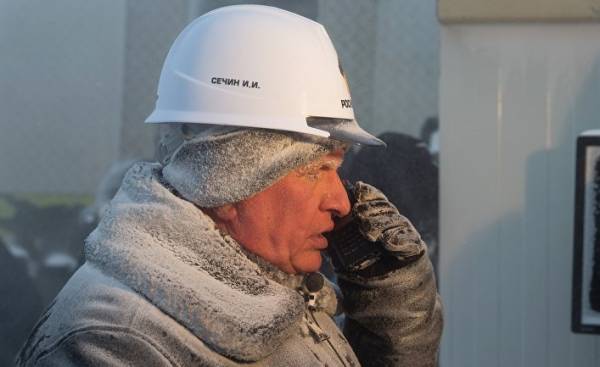 Dressed in warm gloves and fur jacket, heavy with snow and protecting from 18 degrees of frost, the head of “Rosneft” Igor Sechin took the radio and handed over to the operators of the rig the order received from the President of Russia Vladimir Putin: “Start drilling.”

The operator has confirmed the request. After a few minutes, the oil drill has to drill to the planned depth of five thousand meters in search of oil fields, which Russia hopes will provide it with more than a quarter of the future generation. Located on the edge of the Peninsula in the depths of the Arctic circle, “the Central Olginskaya-1” will become the most Northern oil well Russia. As to the North pole this well is located closer than to any locality, it can be called an outstanding achievement of engineering and the equipment is delivered to her over a distance of 3,600 kilometers on the frozen water, which can pass only twice a year. The well is one of the most technologically complex in the history of Russia. For the development of oil deposits located under the ice, often tamerselim waters of the Laptev sea, will be used the most modern technology of horizontal drilling, which allow to reach the depth of 15 thousand meters from the place of installation. This was a moment of glory for Vladimir Putin, who watched from St. Petersburg via videoconference, as the head of “Rosneft” in defiance of the cold, started the drilling process and demonstrated the incredible art of domestic specialists. Three years ago, when the US and EU imposed sanctions against Russia, restricting such companies, as “Rosneft”, the inflow of foreign capital and technology, it was assumed that ambitious projects like the construction of oil wells in remote places are considered to be unlikely. Western governments had hoped that the pressure on the main energy companies of Russia will change Putin’s political calculations. But projects such as “Central-Olginskaya-1” shows that the Russian oil and gas companies have found ways to continue working. “Horizontal drilling is a complex and high-tech operation. And this is only the first well. A lot of work”, — Putin told Sechin during a video conference.

Russia goes to the North in search of oil

The ability of companies to overcome the consequences of the sanctions is crucial for the economic future of Russia. According to preliminary estimates, in the area toward which “Rosneft”, the ice is about 9.5 billion tons of standard fuel equivalent of oil. Experts believe that oil and gas deposits in the Russian sector of the Arctic shelf is equivalent to 20 trillion dollars, and by 2050 it will provide 20-30% of the total oil production. The state company “Rosneft” and “Gazprom” has received exclusive rights to develop fields in the region. “I want to wish you good luck and hope the success of this initiative”, — said Putin. “We’ll keep you up to date,” said Sechin. USA, EU and other Western countries first imposed sanctions in March 2014, after Moscow annexed Crimea and provide military assistance to the separatists fighting in Eastern Ukraine. The sanctions were directed against a number of major banks, defense, oil and gas companies controlled by the Kremlin, and play an important economic role in the life of the country. External financing dried up when the banks stopped the funding streams that were targeted sanctions, and decided to play it safe, as lawyers began to carefully study the fine print. International joint ventures suddenly ceased operations, and the expected investments have been cancelled. “In the beginning many companies feared us to conduct a joint business and invest,” — says one of the top managers of the state oil and gas companies “Gazprom”. “As soon as sanctions were imposed, the lawyers and the panel on assessment of compliance with formal requirements [foreign companies] have become much more powerful.

Despite the election of a President Donald trump, the sanctions still are taking place. Initially, the impression that the sanctions can be weakened or canceled because Mr. trump has called for closer relations with Russia, and Secretary of state has appointed Rex Tillerson, who, while still the Executive Director of ExxonMobil, has signed with “Rosneft” the agreement on joint work in the Arctic in the amount of $ 300 billion. But given that the administration of the tramp closely monitors its relationships with Russian officials, the prospect of a shift in policy has weakened.

And yet sanctions are a big influence to no avail. They caused only temporary difficulties in the Russian economy in October 2014, Rosneft requested more than 2 trillion rubles ($36 billion) from the state emergency Fund assistance for the repayment of external debt. However, a much more important factor was the simultaneous fall of oil price shock, the consequences of which are currently being addressed.

As oil prices fell to decade lows, Russia has entered a recession in 2015, real GDP fell by 3.7%, and in the past — by 0.2%. And although for the last nine months, oil prices have stabilized somewhat, the situation in the Russian economy again. According to the Minister of the economy, the GDP growth next year will amount to about 1.5%, even without the easing of sanctions.

“There is a common opinion that the shock of oil prices even eclipsed sanctions, —said the chief economist of the world Bank in Russia Apurva Sangi. “Over the past few years, the authorities took a number of impressive efforts to ensure macro stability, and the results will not keep itself waiting”.

At the same time, energy companies have found ways to circumvent restrictions. 2 000 kilometers South-West from located in Western Siberia, “Central Olginskaya-1”, “Gazprom” — the third largest oil producer in Russia — demonstrates a minimal impact on his sanctions. At the end of last year, he became the first Russian company to have demonstrated experience in the development of shale oil deposits by drilling horizontal wells with a length of 1 kilometer at a depth of 2.3 kilometres, in the heart of the world’s largest shale deposits under the name of “Bazhenov formation”. And “Gazpromneft” have been able to use domestic technology, which she had to develop once the pressure of sanctions on its international partners left the project. “We quickly began to gain momentum,” says Sergei Vakulenko, head of strategy and innovation aforesaid units of the gas giant “Gazprom”. “The stronger the pressure on us, the stronger we become. As for today’s projects, we did not touch on sanctions,” he told reporters in one of the St. Petersburg offices of the company, where engineers remotely using computers to manage the process of drilling more than 600 wells throughout the country. “In their current interpretation, they are not cumbersome and never as such will not, and no matter how long all this will last”.

In the period from 2013 to 2016 production of Russian oil has grown by almost 6%, more than double the growth in aggregate output in the group of OPEC countries. The income of the three largest Russian producers increased by 11% during this period.

The reduction of income of foreign currency has forced many to restructure their balance sheets with domestic creditors, to reduce the number of unprofitable or costly new projects and to increase their effectiveness.

“The concept is that in terms of sanctions, there can be only the top risk (and it is), as most of the companies suffering negative consequences is minimal,” — says the head of one of Western banks in Moscow. “In fact, many of them had to think about how to improve their competitiveness”.

Signed in December an agreement for the amount of $ 11 billion on the sale of 19.5% of Rosneft shares to a consortium which included the sovereign wealth Fund of Qatar and Swiss commodities trader Glencore, has served the two purposes of the administration of Mr. Putin: it gathered so necessary for the expenditure of recession the budget funds and reported to the relevant idea to those who believed such an operation impossible in the framework of the sanctions regime.

In response to these actions the international oil and gas community has demonstrated a reconsideration of views on the current situation. According to reports, the Financial Times, in meetings with representatives of the Ministry of energy of Russia and heads of companies in the framework of the recent Texas energy conference delegates from European and American oil companies practically did not raise the issue of sanctions.

At the request of the Deputy Chairman Vadim Yakovlev, Gazprom Neft has held talks with major oil companies and hopes for mutual cooperation in our future projects. According to him, the sanctions affected only 1% of Russian oil projects, due to their introduction of the “emotional” reaction of American and European energy companies is on the decline.

Russian energy companies are still inferior to their Western competitors in technology possibilities and would like to resume the suspended connection with the sanctions of the agreement on the exchange of knowledge and joint ventures. The head of “Rosneft” Igor Sechin, being in a good relationship with Mr. Tillerson, thanks to which in 2012 managed to sign a deal with ExxonMobil for the development of Arctic fields, said that foreign partners can join his company for joint exploration of the deposits near the well “Central-Olginskaya-1” Khatanga license area.

“It’s possible, and we do not exclude that”, — said Sechin without any specific examples. “After some time we will be able to attract partners.”

But some examples, such as wells “Central-Olginskaya-1” and “Bazhenov formation” gave hope that even if the restrictions remain, keeping up with the times, the Russian experience and knowledge in this area to ensure future development and production. According to estimates of Gazprom Neft, since, as sanctions were imposed, technological progress has helped increase the average production of wells by approximately 11.5%, and last year with the introduction of new technologies, the company has pumped in 25.3 million more barrels of oil. Some experts suggest that the majority of the projects affected by the sanctions, such as offshore Arctic fields, so expensive and technically complex that can’t be implemented in terms of existing oil prices. If they won’t budge from the current level of $ 55 per barrel, it will take some time before the development of the Arctic shelf will be beneficial. “Of course, in terms of technology of production of shale oil, we are somewhat behind the Americans. But over time, despite the sanctions, we will reach the required level in this matter,” said Vakulenko. “We could do it now, but there’s no need,” he added, referring to more sophisticated technology in shale oil production that will be required for the full completion of the 75 billion barrels of estimated reserves of the Bazhenov field. “Why do we have pie in the sky, if there are more methods available to you right now”?

Given the great dependence of Moscow from maintaining high volumes of production and export of crude oil to pay their bills, challenging goals will soon be achieved. In a sign of its commitment to develop the Arctic region, President Putin visited last month, the most Northern point of the Eastern hemisphere — the archipelago of Franz-Joseph. At the end of drilling in the Laptev sea, next year “Rosneft” will begin work in the Barents sea, and in 2019 — in the Kara. The last two projects were initially planned to be implemented jointly with ExxonMobil, but Sechin said that the work will continue on schedule, despite the presence or absence of sanctions. “It is important to demonstrate our consistency in working with partners,” — said the representative of the company. “Sanctions last only years, but the business relationship continues for decades.”