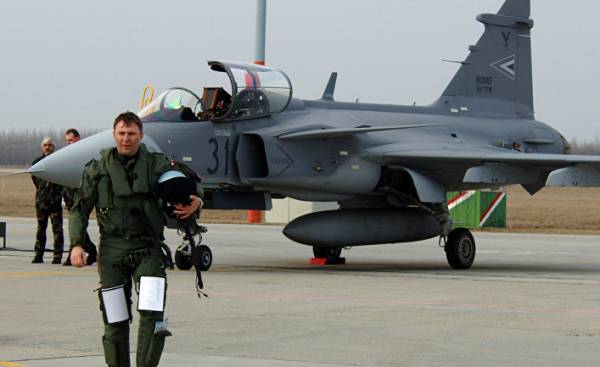 “We want to send a signal to all who have at least some idea attack on our territory: it will be very painful,” he said.

In the company of Minister of defence Peter Hultqvist (Peter Hultqvist) the Prime Minister on Wednesday called for the organization of the Ministry of defence on Gotland. The Ministers had studied the work, which now comes with the aim to re-establish a military presence on the island, and listened to the reports from the staff of air and marine defense as well as representatives of the land army.

Since all the shelves of Gotland was curtailed in the early and mid-2000s, the military activity on the island has largely ceased or is in a frozen state.

But since the conclusion of the agreement on defence in 2015, a strategically important Gotland, it was decided to reintroduce permanent troops. Temporary troops arrived last fall, so it was decided to speed up work. The reason is the increasingly aggressive behavior of Russia.

“We want to send a signal”

Stefan löfven arrived at the military airport in Visby, F17 G, radar for fighter defence Ministry Asken. During the day he also went on a jeep RG32 Galten and the tank 122.

In recent years, the Swedish defence once again began to build weapons and get more money as a result of several intrablock agreements between the government and the bourgeois parties.

Leven wanted to see how the increased presence on Gotland, but has made it clear that the visit should serve as a clear signal.

“We want to send a signal to all who have at least some idea attack on our territory: it will be very painful. We are determined to protect the Swedish land. And therefore Gotland. That’s why we’re strengthening our defenses”.

Aftonbladet: Was it a mistake to collapse the shelf, located on Gotland in the early 2000-ies?

Stefan löfven: Then decisions are made on the basis of the situation at that time. The wall fell, and it seemed that the need for them is no longer so great. But personally, I always thought that Sweden in General has gone too far in its disarmament. Because I never believed that we will come to perfect world, how would we over it worked. Now came the time when we see a need to build up our defense. We plan to keep non-aligned status, to increase the defense capability and to deepen cooperation with other countries. That is what we are doing now.”

In recent discussions on strengthening defense occur more often. After the new agreement this spring in the framework of the joint working group of defence was decided in 2017 to provide an additional 500 million crowns.

“We need to strengthen our defenses”

The Prime Minister did not specify how, in his opinion, it is necessary to increase the military potential of Gotland.

But Stefan löfven also believes that the defense as a whole needs more resources.

“It now seems that we must strengthen our defense in General”.

Defense Minister Peter Hultqvist also believes that the visit was of great importance.

“What we do on Gotland, and the fact that we allocated more money in the spring budget, is a clear signal that Sweden intends to defend the island. We recognize the strategic importance of Gotland and the fact that whoever controls the island, controls and marine and air routes over the Baltic sea. Gotland is also important for mainland Finland and Sweden.”

Aftonbladet: When you have accelerated, you said that this was done in connection with Russia’s actions. What signal would you like to send?

Peter hultquist: Already for some time, we have seen a deterioration in security. We decided that it was important to step up its activities in Gotland as a signal to other countries, but also countries with which we cooperate, we are ready to take on this responsibility. In the Baltic States should be a politically safe vacuum. But, of course, is a signal to Russia.

In the permanent 18th battle group which will arrive on Gotland in the summer, after resupply will include more than 300 people.