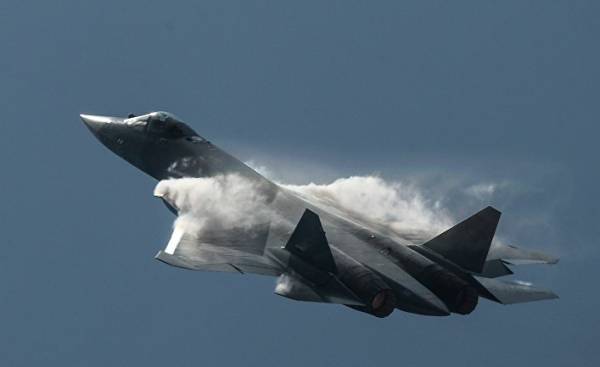 Russia began flight tests of the Suite of integrated radio-electronic equipment of new generation on Board its future fighter-invisible T-50 PAK FA. The new “integrated modular avionics military complex” in its concept is somewhat similar to the work of on-Board electronics of American fifth generation fighters such as the F-22 Raptor and F-35 Joint Strike Fighter, which collects data from various detection devices and gives the pilot the ability to see all the information in a unified and intuitive display.

As noted in the article United aircraft Corporation, which includes the company “Sukhoi”, the new integrated modular avionics weapon system (IMA BK) automatically detects, identifies and accompanies the most dangerous mission by providing the pilot the optimal solution for the destruction of the enemy. “The new system takes control of almost all key devices of the aircraft radar, navigation and communication, while in the previous version of the aircraft to calculate functions of each system used its calculator,” notes of oak.

A new set of IMA, the BK will replace the designed in 2004 by the computing system “Baguette”. The amount of its onboard software has already exceeded four million lines of code, according to the KLA. But the work on this system continues, and the company will have to increase the number of lines of code to fully ensure the operation of the avionics equipment (avionics) of the PAK FA.

In IMA BK multi-core microprocessors are used in domestic production and a new operating system real-time, also made in Russia. The new avionics system using fiber-optic channels providing data transfer rate 8 Gbit/sec. while data transmission over traditional copper cable gives the speed of about 100 Mbit/sec. reports of the KLA. The system will be fully modular and easy to upgrade. “Multicore gives us almost unlimited possibilities for designing fault-tolerant hardware configurations, while saving on weight, power consumption and cost of equipment,” — said the chief designer of the company “Sukhoi” Dmitry Mushrooms.

This system in concept in many respects similar to the integrated system on-Board electronics of American fighters of the fifth generation. “It’s probably something similar. What can you expect from the fifth generation, told The National Interest, senior researcher, Center for comprehensive European and international studies Higher school of Economics Vasily Kashin. — I think it is quite natural that Russian designers try to follow the same trends.”

Over time, Russian can accommodate the new avionics on their older aircraft such as the su-30SM and su-35. In contrast to the us defense contractors, the Russian designers quite often put the same avionics in various aircraft models, to whenever not to re-invent the wheel. I must say that many elements of the avionics of the su-35 was used in the original complex “Baguette” on Board prototypes of the PAK FA. “It’s for the fifth generation, to be installed on T-50 — said Kashin. — Maybe later than they use it for upgrading fourth-generation fighters, but at its core it is for the fifth generation.”

When the stages of development and testing will be completed, the Russians certainly will establish mass production of the PAK FA. But the first batch will be small. “This will definitely happen for two reasons. The US and China is the fifth-generation aircraft, and we have a major joint project with India, and without it we will lose our market, — said Cashin. — As I understand it, first they will build 12 of the aircraft, then carefully check and test the machines, and only then will order additional samples. The initial term of receipt of aircraft the fifth generation in the army — it’s a very long story.”

Moscow in the foreseeable future will probably be a mixed fleet of fighters fourth and fifth generation. One of the reasons it is a great value, as fifth-generation aircraft are very expensive. “I think a mixed composition even in the United States air force, as they intend to keep F-16 2040-ies. In China, the composition of the fleet will definitely be mixed — said Kashin. — It seems to contain air force in part only of cars of the fifth generation no one can afford. It’s too expensive and for most tasks of the fourth generation is enough”.

Kashin believes that the Russian air force three generation aircraft to perform a variety of tasks. “At the bottom of the upgraded su-25 and MiG-35. in the middle of the su-30 and su-35. A few of the T-50,” he says.