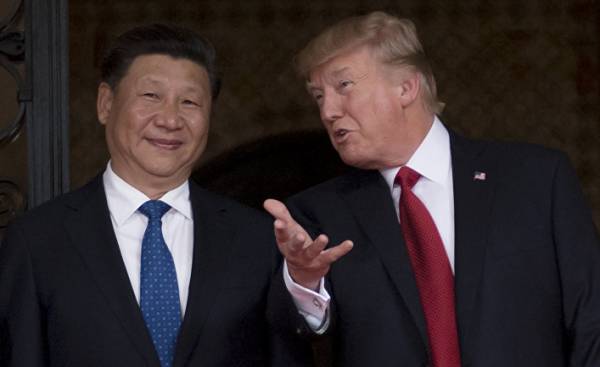 Before the meeting with President of China XI Jinping, U.S. President Donald trump warned that the negotiations will be “very difficult”, largely because of disagreements on foreign trade. But to reduce the bloated trade deficit and America the Trump must first understand what is behind this figure.

Today negative trade balance, as a rule, not connected with currency manipulation or protective duties. In the nineteenth century, tariff regulation was the main instrument of trade intervention, and from the 1920s and 1930s years it was accompanied by currency manipulation. After the Bretton Woods agreements in the international rules — mainly at the insistence of the United States — stipulated restrictions on tariff measures. But Europe and Japan, taking advantage of the situation of the cold war for decades has protected the industry, maintaining a low rate of national currency to the dollar.

While trade imbalances was mainly due to the difference in the cost of delivered goods, and capital flowed from one country to another primarily to balance trade ows. Today the situation has changed dramatically. Capital flows in its scope greatly exceeds real trade, and their direction and size are determined by the managers of investment funds.

It had a huge impact on foreign trade. A significant negative balance in the trade between China and the United States, becomes a consequence of not mercantilist measures, and specific macroeconomic policy under which the manufacture is subsidized by households and the savings that are suppressed.

Look at Germany: after a decade of trade deficits and high unemployment in 2003-2005, the government carried out a reform of the labour market, the main consequence of which was the restriction of wage growth. Unemployment declined, corporate profits rose sharply, while the share of national income attributable to ordinary households, fell, resulting in decreased and the share of consumption in GDP.

But the German company instead to reinvest these huge profits, began to repay previously taken loans. As a result, the share of national income attributable to the savings increased, and the gap between savings and investment and the trade surplus reached a record scale. First, the German banks exported the excess savings to other European countries, and after 2009, when several EU members, lost the ability to pay, has diverted these flows outside Europe.

The experience of China and Japan may seem very different, but the macroeconomic policies in these countries have led to similar consequences. For example, China for the stimulation of growth severely suppressed interest rates. This has led to a sharp decline in the share of households in GDP and recorded a growth in savings. As a result, despite the rapid increase in world investment, China and elsewhere needed a high positive balance to offset weak domestic demand.

The following argument is clearly confusing economists who do not understand how different the situation in foreign trade. When new capital flows in developed economies, never experienced problems with the investment (as in the US and southern Europe), investments do not grow, but instead automatically reduced savings.

This can happen in many different ways. Because of the capital inflows may increase the real exchange rate. This increases the purchasing power of households and, consequently, leads to a reduction in savings. Capital inflows can also cause a reduction in the interest rates and requirements to borrowers, and hence the rampant consumption. It could trigger a “wealth effect”: due to foreign money flowing into the real estate sector, households suddenly feel richer. Finally, capital inflows may lead to higher unemployment, which workers start to spend savings.

This automatic adjustment of the force reduces the savings rate in the countries-recipients of capital. The US, where capital market is highly developed and flexible, and the dollar has the status of a global reserve currency, are particularly vulnerable to such influence. It is the only country able to digest such a large-scale inflow of foreign capital; now it takes almost half of the excess savings of the world.

If trump wants to deal with the negative balance of U.S.-China trade, he is, paradoxically, need to focus not on trade and movement of capital. Instead of introducing new duties need policies that will allow more productive to learn a foreign capital — for example, taking advantage of record low interest rates, to invest in badly needed infrastructure, the economic benefits which will be felt not just business. Or the need to prevent the flow of savings imbalances in the us economy — for example, to tax the capital coming from outside (such US measures were introduced in the 1960-ies).

But what not to do is to engage in a tariff war with China: it will not affect the real causes of the imbalance. In the modern world to cope with trade imbalances is impossible without solving the problem of imbalance of savings. And no talks with XI Jinping won’t change that.

Michael Pettis is a senior researcher at the Carnegie Center.