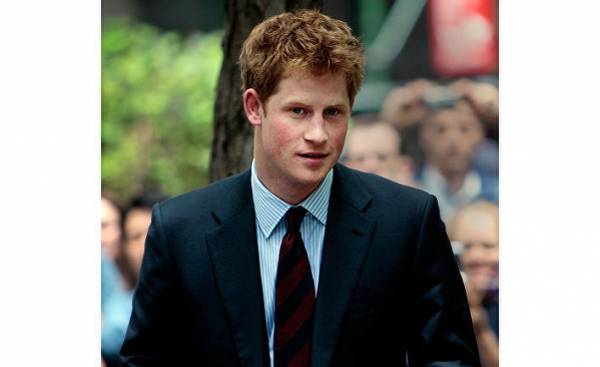 Prince Harry admitted that he had asked for help from psychologists after two years of “complete chaos” in his life, and in adulthood could not come to terms with the death of his mother.

In an interview with The Telegraph, the Prince said that after losing his mother Princess of Wales Diana, “completely shut off all your emotions” almost twenty years, while brother Prince William tried to convince him to seek help.

Harry said that talked about the state of mind with the experts. According to him, he began to solve their problems, only 28 years of age, and this period was “ready to fight with anyone,” and felt deep concern at events involving the Royal family.

Saying that the loss of the mother had a “very serious” impact on his personal and professional life, Prince Harry said of his public life “in front of everyone” he “has repeatedly been close to a complete mental disorder.”

The Prince, who is now 32 years old, appealed to psychotherapists, and even Boxing. According to him, he is now “in good condition”.

Prince Harry took the unprecedented decision to openly talk about his past in the hope that it will help people to overcome the prejudices associated with mental health issues.

He gave an interview to the Gordon, bryony (Bryony Gordon) for the first episode of its new transmission Mad World (Crazy world), in which she talks with famous people about their mental state and problems.

Thirty-minute conversation was a revelation that allowed to look into the innermost thoughts of a young member of the Royal family. The Prince, along with his brother and his wife, the Duke and Duchess of Cambridge have created a charitable organization Heads Together, which stands for emotional wellbeing and mental health.

Prince Harry was 12 when he killed his mother. In the transmission of Mad World he says that in adolescence young and struggling, trying not to think about it.

“I can confidently say that losing a mom at 12 years of age and off all emotion in the past 20 years has had a very serious impact not only on my personal life but my work,’ said the Prince. — Probably, I have repeatedly been close to a complete mental breakdown when grief, all lies, misconceptions and all the rest were surrounded and were pressing on me from all sides”.

The Prince admitted that sometimes he had to deal with their own aggression, which he began to take Boxing lessons to let off steam and to overcome their own depression. “In the years I was engaged in Boxing, as everyone said it would do me good, and that is a good way to get rid of aggression, he said. — Actually, it saved me because at the time I was ready to fight anyone. Better to fight for those who have a helmet and gloves, it’s much easier.”

After some time he asked for help on the advice of his brother and other close friends, who told him: “Look, you need to deal with it. It’s crazy when you think that nothing bothers you”.

According to Prince Harry, learning to talk honestly about his feelings, he now feels that can help others in their “sweat, blood and tears.” “I understand that when a person starts talking about it, he realizes that he is part of a very big club,” he said. This year, the Prince and the Duke will celebrate the 20 th anniversary of the death of his mother. They will open a monument to Princess Diana and will award in her name for “kindness, compassion, and merit”.

Prince Harry told about his loss: “to get away from it, I hid your head in the sand, refusing to even think about mom, because that wouldn’t help me. I thought from the thoughts of sadness will only get worse, although now it won’t be coming back. So with the emotional side I would have thought: don’t let your emotions be present in anything”.

“And then I started to talk, and suddenly the grief, the sadness, which I’m not that experienced, began to come to the fore. And I realized that I have a lot of problems that need to be addressed”.

According to Prince Harry, he believes that he was lucky, as only “two years… total chaos,” he learned how to talk about it. “I just couldn’t understand, he says. I just don’t know what’s wrong with me”.

Even at official events involving the Royal family he would “flee or fight”, and he just didn’t understand why. When he began to openly share their feelings with friends, I discovered that friends are starting to openly talk about their problems.

Waving from assumptions about what he might experience problems with mental health due to service in Afghanistan, Harry said that the hardest thing to come to terms with his mother’s death was due to the fact that he was in plain sight.

“I can definitely say that Afghanistan is in no way connected. I’m not one of those guys who saw their best friends blown to pieces, and I had to put them tourniquet on both legs. Thank God this has not happened to me”.

Prince Harry said that working in the division for convalescent soldiers, he had often heard stories of the wounded, injured and sick about serious mental disorders, and this became a turning point in his views. “I know that’s a big plus when you have the opportunity to talk about their problems. The only thing that makes a person to be silent is the fear that things will only get worse”, — he explained. Worse not only for you but for those around you, because you’ve turned into a problem. I think I had the same problem after 20 years, and I didn’t know how to handle it”.

About professional help, the Prince said: “it’s All in the timing. As for me personally, I had greatly supported brother, bless him, dear Lord. He proceeded to tell me that it is wrong, abnormal, that need someone to speak on this topic in these conversations there is nothing”.

“But the timing was wrong. You have to feel it, needs to find the right person to talk to him.”

He further said, “I strongly urge people to have these conversations, because you will be surprised how well this helps, and secondly, because many people just can’t wait for your candor”.

Confessing that he was a little nervous and had some doubt about the interview, Harry said that he would try to bring about change, while younger members of the Royal family “more interesting” to the public. He will make his case before Prince George, Princess Charlotte and his own future children into the limelight.

Turning to its state at the present time, Prince Harry said: “We are trying to steer the conversation to normal, until having to sit down, drink a Cup of coffee and a friendly and honest conversation, like: “you Know, I had such a rotten day, let me tell you about this?” Because if not, you’re going, and it turns out nothing”. He is now in a “good place”.

“Due to the fact that I’ve done over the past two and a half years, I am now serious about my work, I can really relate to their personal lives, can sweat, blood and tears to support all these changes, I think, important for everyone else.”