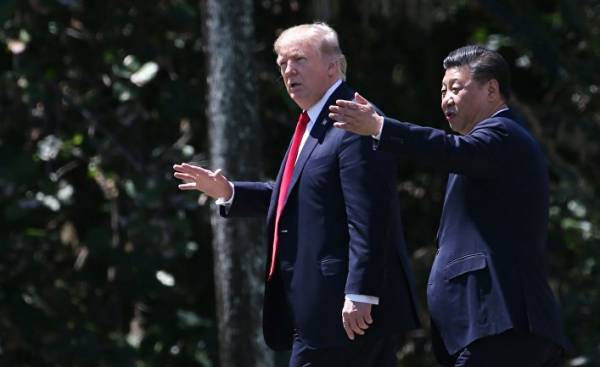 The meeting at Villa Mar-a-Lago in Florida, the President of the United States of Donald trump and Chinese President XI Jinping on 7 April, has all chances to become a historic event that shaped the landscape in world politics, at least in the next five years. The leaders of the two largest economies of the planet and the two most powerful Nations of the XXI century has announced its intention to “reset” relations, which in case of success of this process will fundamentally change the balance of forces and interests in the world. That, of course, is a very unpleasant surprise to Moscow, which in such a situation simply is on the sidelines of international politics.

Anti-Chinese rhetoric trump during his campaign looked so convincing and sincere that she bought plenty of experts in the United States and abroad. Well, as we do not believe such intimate emotions of a presidential candidate: “I won’t make him a ceremonial dinner. I’ll take him to McDonald’s will take him a hamburger and say that we need to work as it should because it is wrong to devalue the yuan… Well, so be it, will take him a double big Mac” (August 2015 — air FoxNews). Or the statement made by the tramp a year later, at a rally in Indiana: “China made “the biggest theft in world history… We can no longer allow China to rape our country.”

And as after that not to believe in the intentions of the new President to make a “big Chinese day”, which includes a barrier (45%) duties on certain goods from China, investigation “currency manipulation Beijing” with the subsequent imposition of sanctions, the intention to abandon the principle of “one China” and the start of deliveries of a large consignment of arms to Taiwan? Believe…

Having missed with a few nuances. First, a categorical denial of the trump from the concept of the TRANS-Pacific partnership, which is to not talk about it, it was mainly aimed at “containment China” and opposition to its strategy “of economic space of a New silk road.” Second, the fact that by 2016, Beijing has become the largest trading partner of the United States ($441,56 billion), beating Canada. And that’s not counting the billions of dollars in investment, the momentum of Chinese companies and banks operating with American partners. To arrange a full-scale trade war in such conditions is a sign of complete inadequacy and trump in such had not been noticed. And thirdly, although this is quite subjective and personal, especially the negotiation tactics of the new President, brushed it back when he ascended to the top of the business to Preface negotiations with the counterparty with whom the agreement is needed, tough rhetoric, pressure, then to present the compromise reached was a product of your own peace and sanity.

Interestingly, in Beijing attacks trump in his address perceived quite calmly. Moreover, his victory had hoped, although, yielding to the international mainstream, the calculations were built on the victory of Hillary Clinton. Envoy of China to the United States Cui Tiankai, one of the most powerful figures in modern diplomacy, was familiar with all the key members of her team. But the communication with key staff of the trump he instructed his subordinates.

However, as it turned out later, this distribution of level of contact was for Chinese diplomacy is absolutely critical. After the “hot December”, when trump, shocking everyone, spoke with the President of Taiwan and the visit of state Councilor Yang Jiechi in new York and his meeting with the advisors to the new American President was not entirely successful, the Chinese have used its trump card, “an old friend of the Chinese people” Henry Kissinger, who arranged for their contact with Jared Kushner, son-in-law of the President, officially holds the post of senior adviser in the White house.

He, his wife, daughter trump Ivanka, and their five year old daughter Arabella, as a joke today in the Washington corridors have now become the main experts on China in the United States. Strong propaganda move — visit Ivanka and Arabella to a reception at the Chinese Embassy on the occasion of the New year according to the lunar calendar and Twitter with a video where a girl reads a poem in Chinese- became for all stakeholders the signal that trump is ready for serious and constructive dialogue with President XI, the Chinese leadership immediately took advantage.

At his Villa Mar-a-Lago Florida trump took the Chinese leader underlined with kindness and scale, as much more than the cost of a double big Mac. His assessment of the meeting: “Incredible progress”. Of course, there’s a certain amount of exaggeration, though, because the specifics of the agreement are not yet includes only developing within 100 days of the program to increase U.S. exports to China and reduce the deficit that the US has to trade with China.

The real U.S.-Chinese agenda much bigger and more complicated, involves a lot of pressing issues from industrial espionage to the situation in the South China sea. But trump, and the President of the si clearly given to understand that anticipated many observers of the confrontation between Beijing and Washington, with the new occupant of the White house is not going to happen. “We have a thousand reasons to improve U.S.-China relations, and to their ruin” — with a share of ornate stated following the talks, XI Jinping.

And indeed it is. To date, neither China nor the American ruling elite there are no objective reasons for serious conflict. Contradictions and controversial issues all you want, but the reason for the hard confrontation there. To create jobs in the U.S. economy Trump needs stable ties with Beijing. The same stability in relations with America needs and China’s economy.

For all his faults, trump for President XI Jinping more clear, predictable and credible partner than Obama, the ultimate goal for Chinese leaders remained a mystery. Started like with the intention to bring ties to a new level, and finished the “turn to Asia” and plans to create a TRANS-Pacific partnership, both these concepts carried distinct anti-Chinese overtones. In the first case — the military-political containment of Beijing, the second will not allow China to write the rules of world trade. As to trump, he, as now seems ready to repeat the path of George W. Bush, too, starting with bellicose rhetoric, but ended efforts to establish closer economic and financial cooperation with China. Which, incidentally, still serves as a reliable factor in the development of U.S.-China relations in a conflict-free basis.

In addition to public level trump Jinping, there are reliable channels, the same line of when Cui Tiankai Jared Kushner. And there is information to suggest on the continuation of this line more than interesting talks on the issues of joint actions of Washington and Beijing in the post-Soviet Central Asia and Afghanistan. And although this is a topic for another conversation, but these “first signs” of political and military cooperation between the US and China looks very suggestive.

In the first place. The results of the us-China dialogue of the Kremlin and Kremlin experts can hardly be called otherwise than “deep disappointment”. Moreover, the meeting in Florida very quickly turned into quite the practical result — less than a week after it, China abstained in the vote on the resolution on Syria in the UN security Council on the use of chemical weapons, while in Moscow why-that hoped that Beijing opposes.

The Kremlin is still trying to “save face”. “This is a sovereign position which was occupied by the sovereign of China. In this case we have no right to comment”, — explained the press-Secretary of Russian President Dmitry Peskov. But it is increasingly clear that the “strategic partnership” with Beijing, “the Russian-Chinese anti-American axis” in fact, there is another illusion of the Kremlin’s diplomacy.

“The naked king” or another “stab in the back” — that’s as anyone, but the upcoming visit of Vladimir Putin in Beijing on may 14-15, will be solely ceremonial. And attempts of the Russian side to convey to Chinese elites as self-importance as an ally, and the perils of partnership with the US — will remain, with impeccable courtesy of Beijing and assurances of friendship from the Chinese officials, with no response.

The Chinese leadership does not intend to support the current Russian throwing in Syria is exactly the same as before, refused to support the epic Crimea. And certainly not intended as a sign of solidarity with the Kremlin to spoil relations with Washington. It is not only in the economy (more than four hundred billion dollar annual trade with the United States and six billion turnover with Russia). The problem is much deeper. Foreign policy China considers the ultimate goal of creating the most favorable conditions for the development of their own country. Foreign policy of Moscow is aimed at meeting the ambitions of a narrow layer of the ruling class. This is their fundamental difference, and it is also why birth trauma diplomacy of the Russian Federation, the Kremlin is making the “third wheel” in relations between Washington and Beijing.

When I grow up oil prices?