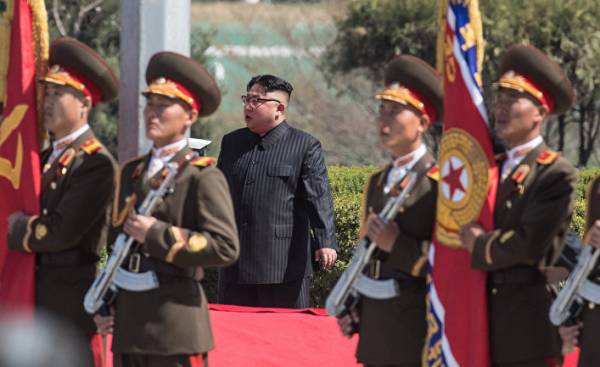 It is not excluded that North Korea will soon conduct another nuclear test: at least to prepare for it show the satellite images, dated 12 April, which noticeable increased activity at a nuclear test site Pangari. In any case, it is argued, generally well-informed experts at the American Institute for Korean studies at Washington’s Johns Hopkins University.

Journalists have no opportunities to do a photo directly on a place of events — the landfill, located in a remote place in the North-East of the country about 200 kilometers from the Russian and 100 kilometers from the Chinese border, very carefully guarded. However, on the basis of past experience we can assume that such activity is a good indicator of the upcoming trials. So, in 2013 in the area for several weeks have seen the movement of cargo motor transport, and soon after that seismic stations in China and South Korea actually recorded the explosion of a bomb.

Expect another nuclear test causes another factor: on Saturday, North Korea will be something to celebrate. And in a country with the “Stalinist” style of government symbolism is no small thing, and the Central element of the whole political life. When North Korea in 2012 declared itself a nuclear power, it happened in the year of the 100th anniversary of the founder of the state Kim Il-sung. They say that the grandfather of the current dictator, Kim Jong-UN during the Korean war of 1950-1953 was a dream that would be ever a leader in nuclear power.

Phase of consolidation of power in the past

On Saturday, Kim Il-sung celebrated his 105th birthday, if in 1994 died from a mere heart attack in his office in Pyongyang. As for his grandson, he is trying, finally, to realize the dream of his grandfather. After a phase of consolidation of power within its state apparatus (for example, a few years ago he ordered the execution of a confidant of his father, Kim Jong Il, his own uncle Jang sung-Taek, and in February of this year in Malaysia, presumably, also, he had poisoned his stepbrother Kim Jong-Nam), Kim Jong-UN increases the pressure on other countries, conducting new nuclear tests. After the first tests in 2006 and 2009, which took place under his father (who died in 2011) probably took another three tests, and the intervals between them were shorter from time to time.

Thus the North Korean leadership pursues several objectives: first, a nuclear bomb is a guarantee against a possible “regime change” on the part of the Americans, who at the same time protect South Korea. Even the collapse of the Eastern bloc and the Soviet Union became North Korea is still under Kim Il sung political trauma. And if the Soviet Union, while remaining a nuclear power, collapsed because he could not confront the United States in the economic sphere, that such characters as Saddam Hussein in Iraq and Muammar Gaddafi in Libya fell, unable to oppose America in military terms. And recently Syrian President Bashar al-Assad had to accept the missile attack on the United States base its air force. And even Russian, having in Syria, numerous guided missiles, were unable to prevent the blow.

Besides Pyongyang “untwists” in their propaganda, in light of the “American threat”: those who happen to visit North Korea kindergarten or school, you will see there are not only drawn by children nuclear missiles, but infinite manifestations of “anti-Americanism”. The American soldier is there the “main enemy”, carrying North Korean children “misfortune.” Followed by “sneaky Japanese” naive “vassals” from South Korea. And Kim Jong UN do not tire of telling his young compatriots, these “horror stories”, because on them rests his entire state apparatus.

Economic growth is associated with the status of nuclear power

So, North Korea will cave in the face of threats? Unlikely, because just as the regime will threaten the world with nuclear bombs, guaranteed him attention from the world community, primarily from America. The attention that Kim Jong-UN seeks to reverse the diplomatic and economic benefits for themselves. At least, so it is possible to understand his statement at the meeting of the Central Committee of the ruling workers ‘ party of Korea in March 2013: status of nuclear power is inseparable from the economic recovery of the DPRK.

How is this possible? The logic of Kim, the existence of nuclear weapons gives him more space for diplomatic maneuver, and now it has become visible, with Donald trump last week openly urged the Chinese President XI Jinping to action against North Korea. That, in turn, obviously, not too happy with the persistence trump. According to Chinese media, he urged the American President to a peaceful settlement of the conflict. Although he had forbidden the import of coal from North Korea, it’s all just little things, especially the celestial Empire, and had already introduced penalties against North Korea, for example, forbidding their visiting North Korean border area where the Chinese were open ski resorts and casinos. This talk about a radical change in the political direction of Beijing is not necessary.

Instead, trump unwittingly brought their biggest opponents — China and Russia. Relations between Moscow and Washington after the American missile attack on Syrian air base, and so reached the “zero level”. Russian foreign Minister Sergei Lavrov urged Americans to refrain from unilateral actions and to North Korea, and Beijing joined the call. And although both Russia and China regularly rigidly expressed in the address, Kim Jong-UN in recent days, perhaps, he has acquired two “new old” allies.

The situation is at an impasse: North Korea will not abandon its nuclear program and will develop it further. To increase the pressure, it will work to improve its missile technology to missile could reach the United States. In addition, the Kim regime will do everything it can to increase the power of a hydrogen bomb. In January 2016 the American and Chinese seismic stations recorded the activity emanating from the landfill Pangari. Pyongyang claimed to have tested a hydrogen bomb, which, however, has been refuted by American experts: the vibrations were too weak for it to be true.

The fact that nobody really knows the real power of his bomb, plays into the hands of the North Korean regime. In addition, many forget that this country has a huge (the second largest in Asia after China) an army equipped with conventional weapons. According to the Pentagon report for the year 2012, Pyongyang has more than four thousand tanks and 730 (even if obsolete) combat aircraft. In constant combat readiness is a million soldiers, and the entire population of the country, being under the influence of official propaganda, set up very aggressively. Worst of all in the case of a real military escalation would have to be neighbors to the South of the Korean Peninsula, whose capital Seoul is not far from the border between the two Koreas.

The North Korean attack is unlikely

Assuming that Kim Jong-UN and his regime will act in any rational (even according to your own logic), the attack by North Korea is unlikely. Because it would inevitably lead to the collapse of the Kim dynasty, the third of which is at the pinnacle of power. So what kind of “red line” for Kim Jong-UN is a tacit ban on the sale of nuclear materials and related technologies to terrorists from the “Islamic state” (banned in Russia as a terrorist organization — approx. ed.) and the like. For America this would be a clear reason to start a war against the DPRK. In view of this well-known expert on Korea, Ruediger Frank (Rüdiger Frank) is in favour to give Pyongyang the ability to legally earn money. According to him, the more intelligent will always provide the opposite side of the ability to exit the situation.

How could this look “smart”? Judging by the fact that in the direction of Korea is now moving the American fleet, Donald trump relies on the use of force. Or is the ultimate threat, aimed at forcing the DPRK to change its own line? In 1993 the us administration under bill Clinton threatened military strike on the North Korean nuclear reactor at Yongbyon and was close to the actual implementation of the threat. But former President Jimmy Carter was able to negotiate a compromise that could have averted a new Korean war: the regime of Kim Il sung pledged to abandon nuclear weapons in exchange for deliveries of crude oil and construction of reactors, “light water”. However, this arrangement did not last long.

However, what the President failed to reach a new deal with North Korea? In principle, it could be called a developed industrial country, although with outdated equipment. Being a “businessman” by nature, trump could easily do Pyongyang to certain economic proposals, he agreed to a new disarmament. Otherwise Kim Jong-UN to continue to develop its bomb — and to demonstrate to the world their gains. No matter, it will happen on Saturday or in a few weeks.