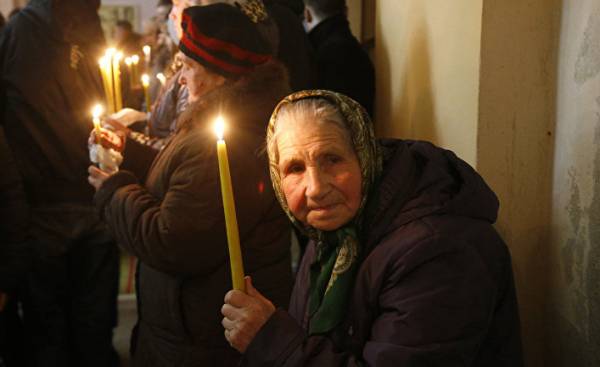 Following the example of Jesus requires us to love people with a sense associated with victims solidarity, it requires us to expose any ideology, claiming that inequality is natural and established by God.

In that Church in which I grew up, in the framework of cultural traditions, it was assumed that Christians should vote for the liberals. Jesus was not a supporter of parties that we knew about it, but the questions concerning “family values” — sexuality, marriage, abortion, euthanasia, drugs — we were pretty convinced that his values align with ours, like the values of the Liberal party, and therefore conservatives ‘ victory was the victory of the “Christian” way of life (the ideology of the Liberal party of Australia — conservative or liberal conservatism — approx. transl.). In a broader sense, the subconscious — and sometimes openly expressed, the view was that the rest of the conservative political platform must also receive the blessing of God. Environmental protection, rights of refugees, multiculturalism, trade unions, social security, reconciliation with the first peoples of Australia (Australia’s First Peoples) — all this, at best, had no special significance for our faith, and often these concepts were ridiculed as evidence that the Australian Christian values have been undermined by the progressive, socialist or humanistic agendas against God.

And although Jesus was not involved in party politics, He, judging by his entourage was biased — he was supposed to be on the side of the free market and low taxes, government programs “Choice of work” (Work Choices) and the war in Iraq. Jesus was not necessarily a liberal, but he certainly was connected with individualism, capitalism, militarism, colonialism and Western hegemony of the United States.

With the years I became increasingly difficult to reconcile such things with the New Testament, self-proclaimed “good news to the poor.” As a pastor and preacher, faced with everyday actions of Jesus in the Gospel accounts, and with real life molodegi, people seeking asylum and people living on the roadside, I found that the mental gymnastics required to maintain such a worldview, is not only tedious, but meaningless.

We turned a religion based on following His example, example, endlessly selfless, the institution which made self-love “blessed” and which uses any in his possession the power to maintain their cultural and political domination. Today, as in the time of Jesus, political and religious elites organize a conspiracy to save the best structural and economic inequalities.

During Easter, in my opinion, this tension is particularly strong and unpleasant. The American theologian John Yoder (John Howard Yoder) describes the death of Jesus: “the expected political and legally a moral clash with the powers that ruled the society in which he was placed.” We remember His death and we see that the nature of His death, His life testimony and, in fact, the prophets of the old Testament that created the context for His appearance, — all this points to the undeniable truth that Jesus was partial, but not like I was forced to believe it.

It would be difficult to say that Christians should support a particular party and certainly associated with some of them, no matter how time change its values and policies.

However, I really believe that we are called to be on the side of those who were kicked to the curb and did a poor a system created in order that its benefits are enjoyed by those who is at the top. If we follow Jesus, we must be with those that have been rejected, forgotten, abused and disabled in social and economic terms — whatever our personal expenses.

To be on the side of the poor and disadvantaged is not to support progressive values, correct opinions and even not mean to vote the right way. To be on the side of the poor — it means to make a decision to influence, any power, privilege and resources at your disposal, to change not only the immediate condition of the individual, but also — more importantly — the economic, social and cultural systems that perpetuate inequality, poverty, exclusion and exploitation. Laws are important, the national budget matters, policy matters, because they not only reflect what society approves, but they also provide the framework which underpins the structural or social inequalities.

The concept of Jesus was not to create a hospital at the foot of the cliffs (accessed only after listening to a sermon). His concept was a real possibility of creating an alternative society in which this steep rock would have been destroyed.

We know that corporate greed, neo-liberalism and leaking down Economics (trickle-down economics) do not work. We know that unrestricted capitalism is destroying our planet and contributes to the rapid growth of inequality. We know that discrimination on the grounds of race, gender, sexuality or religion — makes people suffer, makes our stay less healthy, and our world less safe.

We know that the economy is designed to favor the rich, and the incomes of people at the top are growing, whereas wages of the people at the bottom is reduced. We know whose interests are protected by our ruling leaders, when the rich are tax-exempt, and as a result reduce the cost of legal service to the community, funding education on the basis of existing needs, as well as other forms of social support.

And we know that Jesus was constantly on the side of the poor. Easter, with its powerful image of the crucified Jesus and nailed to the cross it was because religious and political leaders sought his death, compels us to dedicate our lives to serving others. To follow Jesus means to love people not only with words, theology, or charity. To love Jesus is to show associated with possible victims solidarity and determination to expose the evil of any ideology that tries to make us believe that inequality, violence and exploitation are noble, natural and established by God.

The days of Easter remind us that we know how it will all end. Those people for whom the system was unfair way, crucified on the cross those who threaten their power.

But someday we will still win.