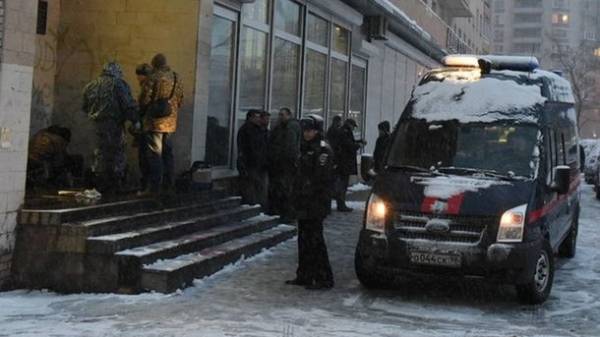 The guy who was injured in the blast near one of the libraries of St. Petersburg, is a 17-year-old student who lives in Vsevolozhsk Leningrad region, however, according to preliminary information, earlier his family lived on Vasilyevsky island, where the incident occurred. According to local newspaper “Fontanka”, he is a first-year student of the faculty of chemistry of the technological University full-time budget form.

Witnesses describe the incident this way: a student approached the entrance to the library, he was on the back of the backpack, which he dug, and at some point, there was an explosion.

On the porch of the library the guy rose from the side of the main entrance, which at the time was closed. Inside the student did not come, and, judging by the video, we can assume that was not going, the trajectory suggests that he rather was looking for a secluded place, because outside it was snowing heavily. An IED detonated at the moment when the young man dug in his backpack.

Now experts are unable to install the device, which exploded. According to preliminary information, it was shell-free and had no damaging elements.

By the way, the resource has also posted a video from the social networks of the victim. The footage shows how dangerous things likes to do guy.

Now the teenager is in the hospital and he underwent surgery. He diagnosed traumatic amputation of a hand, second hand should be able to save. His condition is very serious, he is in a state of shock.

Vice-Governor of St. Petersburg Anna Mityanina argues that the threat to the life of a boy no.

About 18:50 in the hands of a teenager, born in 1999, exploded unidentified object. The victim was taken to the intensive care unit of children’s hospital No. 2. Threat of life.

Meanwhile, in the University’s publication said that the boys fascination with chemistry is not something special for the average student of their Institute.

“With the chemistry he’s really in trouble – took a bunch of competitions. Experiments – the inseparable companion of any chemist. And curious – even more so. But in the version that he built the device, we don’t believe it,” – said the publication of the classmates of the guy.

Even the family of the young man are unable to explain how he is in the middle of the week was at the library on Vasilievsky island. The fact that the young man lived in Vsevolozhsk with their parents. There have been law enforcement and found no reagents. And fellow students, among other things, said that the last time, the young chemist are rare. On the day of the incident he was absent, too.

Meanwhile, the status of the social network of the young chemist – a quote from a song by little-known groups: “Punitive psychiatry works best when punishing a psychiatrist yourself.”

Add that to the main investigation Department of the TFR in St. Petersburg opened a criminal case on the fact of injury as a teenager in the blast of an improvised explosive device, reported the press service of the Ministry.

Earlier it was reported that in St. Petersburg near the library explosion teen severed arm.