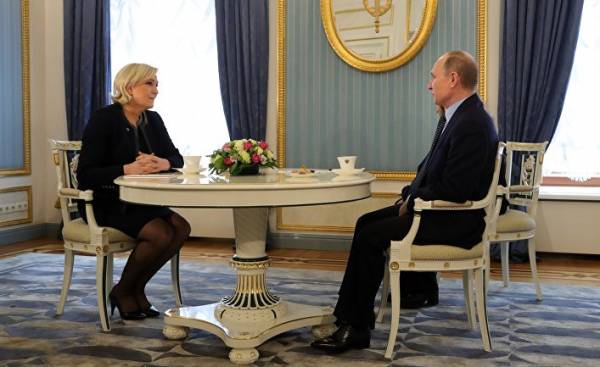 Marine Le Pen, which would like to see on a post of the President of France even some Czech superpatriots, obviously no problems in relations with Russia. And how could they be, if Le Pen was going to borrow money for the campaign from Russian banks. Bash to bash. For the money — friendship and loyalty.

Le Pen advocates a privileged partnership with Russia. French-Russian partnership, in its opinion, necessary and caused by “obvious civilization and geostrategic factors” as well as the French “in the interests of energy security”.

In other words, “perhaps we need Russian gas, so will be good.” Cossack horse, from the Seine to drink will not. And the fact that he is drinking somewhere in other place, not so important.

Le Pen believes that “France has interests in Europe, but in wider Europe, including its partnership with Russia”. Of course, then we come to mind that Russia has interests in the “small Europe”. What?

In an interview with Russian newspaper “Kommersant”, Le Pen said that “the demonization of Russia is at the level of the EU, and it happens a filing with the US trying to build a unipolar world”. Who, in its opinion, should be the second pole? Russia? Economically weak country that violates international law, and where the killing of political opponents and opposition journalists?

Order in Russia, Le Pen is not very concerned about. About democracy in Russia and Vladimir Putin, she said: “we Have in France is also not a perfect democracy, and we have no right to give Russia lessons in democracy. But I admit, and I do not hide that to some extent I admire Vladimir Putin. He makes mistakes, but who doesn’t make it. The situation in Russia was difficult, and we cannot expect that all problems resulting from the collapse of the USSR will be resolved quickly, it takes time. It seems to me that Vladimir Putin has the character and vision necessary to ensure Russia’s prosperity, which it deserves.”

Its principles have formed Putin in the KGB and his vision, of course. In power, he is already 18 years old, and yet with the prosperity of the problem. Everything Russia had, grew and fell along with oil prices. A man with a vision of the future so nothing and did not. He had little time? MS Le Pen is either naive or unprincipled. Is there a third option? Incapacity not recognized, so no.

Her “national front” stated that the United States took control of the Ukraine with the Ukrainian crisis. “National front” also condemns anti-Russian sentiments in Eastern Europe and the subordination of Western Europe to NATO’s interests in the region. MS Le Pen has never lived under the rule of Moscow. Otherwise, she probably would understand anti-Russian sentiment.

Le Pen also was critical of sanctions by the international community against Russia: “European countries should look for diplomatic solutions, not create threats that can lead to escalation.” The United States, according to Le Pen, conduct of a new cold war against Russia. The annexation of Crimea, the leader of “National front” does not consider illegal. After all, there was a referendum. Literally feels like it was America and NATO annexed the Crimea, and so there was an “escalation”. And Putin has absolutely nothing to do with it.

What can I say. Someone uses weapons, and some diplomacy. Why you need diplomacy, if someone acts from a position of strength? If Russia had the idea to Annex part of Estonia, and then to hold a referendum there, would that be okay? Then Hungary would occupy part of Slovakia and to hold referendums. From the point of view of international law, all would be fine? And when the separatists in Eastern Ukraine, a new Russian weapon that has never been in service with Ukraine, where does it come from? Falls from the sky?

Now that Madame in the second round of the presidential election. It is sad that — even if it does not win — will remain her strange voters. So we have: if Zeman does not win, will remain 57% of people who think he fit the role of President. (In the news at the end of the week said that we are short of psychiatrists. So that’s it!)

Marine Le Pen may have the support of the few thinking people. And if these people think, probably not the best way.