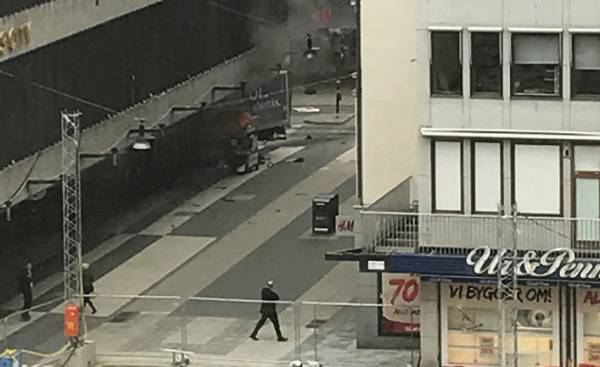 April first Friday was black for the Swedish capital: in the center of the pedestrian area of Stockholm was an act of terrorism carried out in the same pattern that earlier in nice, Berlin, London. The day April 7, man in a stolen truck stormed onto the pedestrian street and Queen’s — Drottninggatan, where he hit about 20 people, then crashed into the building Department. The sad result — four dead, 15 wounded, four of them are in serious condition. The driver was able to escape, but in the large-scale police operation was detained in an immigrant area in the North of Stockholm: the Swedish law enforcement authorities were confident that they got it is the attacker who was driving the truck. The terrorist turned out to be 39-year-old Uzbek named Rahmat Akilov, an unsuccessful applicant for political asylum, which was to be expelled from the country.

According to the Swedish media, “Facebook” detainee discovered propaganda of the “Islamic state” (banned in Russia organization — approx. ed.), police and intelligence agencies confirmed the information about the likes, but not on the links with extremists. In 2014, the citizen of Uzbekistan has filed a petition for obtaining a permanent residence permit in Sweden, in June 2016, the authorities took the decision to refuse, subsequently, the future killer “fell to the bottom.” From February 2017 Akilov had wanted to prepare for deportation and did not appear at the place of residence specified in the documents. Earlier, he had come to the attention of the police, but not in connection with allegations of extremism. Friends don’t describe him as religious fanatic: according to them, he was a normal man, worked construction, drank and tried to send money to their family: wife and four children of the terrorist in Sweden do not live.

The experts were able to identify the victims: two of them — the subjects of the Swedish crown, one British citizen, one citizen of Belgium. Police search continues for potential accomplices of the terrorist who made several arrests, interviewed about 500 people.

The next day after the attack “Demonstration of love” campaign in memory of the victims gathered on a Central square of sergels Torg, Stockholm tens of thousands of people who Express the desire for peace, love, and support each other in these tragic days. The Prime Minister of Sweden Stefan Leuven (Stefan Löfven) is called the incident “an attack” on the country, promising that the incident will not change the Kingdom, open, respecting the freedom of citizens and democratic values.

The attack on the pedestrians was the return of Islamist terror on Swedish ground after six years. 12 Dec 2010 in Central Stockholm, adjacent to the Queen street alley exploded two bombs. Apparently, the explosive devices were detonated too early, killing only one person — the bomber, 28-year-old native of Iraq with the Swedish passport, dissatisfied with the participation of the Kingdom in the war in Afghanistan and the publication of the Scandinavian press of cartoons of the prophet Mohammed, owned by Peru of the Swedish artist Lars Wilks (Lars Vilks).

That explosion, little has changed in Swedish politics: the authorities for decades considered their country as a world leader in the field of humanitarian assistance. Swedish society remained open to all, asking for asylum — including those who took advantage of these opportunities without any gratitude to the host country. Sweden has adopted a significant number of needy in terms of capita, significantly more than Germany, and the Kingdom is obviously unable to cope with the flood of new residents. The Swedish press is overwhelmed with coverage of the communes, fall into a deadlock because of the huge influx of immigrants, inevitably raises the question of security. The government of Stephen Leuven responded to the rising wave of criticism a few weeks ago, actually stopping the wave of immigration the introduction of border control on the bridge Oresund between Denmark and Sweden, symbolically linking the Kingdom with Europe. The debate about the integration of these measures have not stopped, and now they appeared the scene: Sweden, generous to strangers, got one of them a blow to the heart.