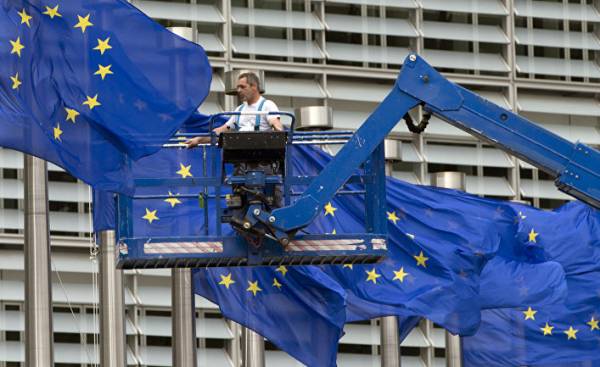 Forget Juncker, Shultz and other “euroenthusiasts”. If that will push the European Union towards closer integration, so that external challenges.

Politics is the sphere in which ideas and results do not correlate directly. The cards are often mixed unintended consequences.

Deeper and stronger integration driven from above, was to lead to the emergence of the United States of Europe. But the birth of a European “superstate” did not happen, but on the contrary, among the countries-members spread discontent and intensified centrifugal trends. In recent years, the European Union is going through crisis after crisis because of fussy combiners.

Here, it would seem that the question of closer and deeper integration to be delayed by European elites for an indefinite period. But supporters of a United Europe, there is still one hope.

Presidents of Russia, America and Turkey: Vladimir Putin, Donald trump and Recep Tayyip Erdogan. All three of them have enough reasons to consider a strong, consolidated and unified with the position of the European Union a geopolitical rival.

Donald trump touted Brakcet and Nigel Farage. Some people in his entourage with glee expecting a new exit from the EU.

According to trump, the United States bear the losses alleged from unbalanced trade relations with the world. And from that vision — just one step to see the European Union’s biggest rival to American hegemony.

Vladimir Putin, too, would prefer to negotiate the price of gas with each country separately, not with a half billion unit as a whole. And this, not to mention the sanctions, which complicate the internal political situation in Russia.

There is circumstantial evidence that Russia supports the political forces that are related to the edges of the political spectrum, in several EU countries, thereby destabilizing the whole unit. And if this effort was joined by America’s trump, which at Barka Obama listened to our continent all that makes sounds, including the German Chancellor, the European Union will not stand.

However can happen and the opposite. External pressure, on the contrary, may internally unite the European Union and even to stimulate the political will to create its own defense and intelligence agencies. Thus, the external calls would not be the results that were originally planned, making Europe strong.

This week we were shown an example of Turkey. The Erdogan regime believes that with a little Holland can do anything.

Prime Minister mark Rutte took advantage of the situation and took the attitude of the Turks tough stance to dissociate themselves, thus, from Geert Wilders, and it is possible that it helped Rutte to win elections. If the Turks began to exert pressure on the Netherlands, the elections there could be a completely different result.

And something similar could happen in any part of the old continent. If the Europeans realize that the other powers to deliberately harm the EU from outside, that natural instinct will make people to unite. They will tell themselves that, Yes, the Brussels Eurocrats are terrible, but at least they’re “our”.

Of course, it’s not the best analogy, but the unity of Italy and Germany in the 19th century was preceded by a conflict (even military) with neighbouring States, who were on hand to fragmentation of these two countries. Of course, the European Union would not wage war for your Association. Only if hybrid.

Anyway this game is history and unexpected results would be interesting. Maybe politicians such as Jean-Claude Juncker and Martin Schulz, the dream that someday they will go down in history as a kind of “fathers of Europe”. But it is possible that these fathers unifiers of Europe will eventually become trump, Putin and Erdogan. Even with them it is unwanted fatherhood.