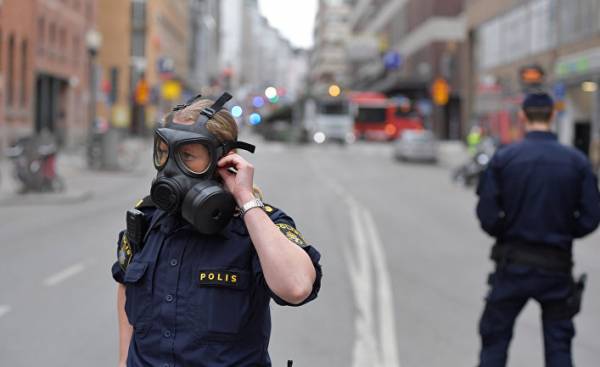 The Swedes defend their open society, without barriers, but committed by the migrant act of terrorism can change the country.

One of the most welcoming refugee countries in the world that’s know will the worst terrorist attack in peacetime turning point in establishing immigration policy.

At the moment the Swedes loudly defend their open society, without barriers, after the attack on Friday. According to police, it was probably made by Uzbek man sympathetic to the Islamic state (a terrorist organization banned in Russia — approx. ed.). Uzbeks had been denied asylum.

On Sunday, thousands of people gathered in Stockholm to celebrate “love”, they hugged, bringing flowers, listening to loud music and held a minute of silence to commemorate the victims. The rally also was to be a message to the politicians.

For 51-year-old Wasps Arc, Qvarfordt (Åsa Arkö Qvarfordt), a social worker, Sunday’s demonstration was dedicated to the fact that Stockholm did not become a “hostage of fear or hatred.” 28-year-old Peter sandström (Peter Sandström), who is preparing to join the army, wants the country was United, “regardless of who we are.”

On Sunday, Prime Minister Stefan löfven (Stefan Löfven) urged the opposition to unite and join the minority government in developing more effective ways to prevent further terrorist attacks. He stressed the need to use the “collective strength of Swedish democracy”.

But the calls for unity voiced at a time when Swedish politicians are faced with disagreements. The Finance Minister came under pressure due to proposed changes in taxation, and government policy in the field of asylum fuels the popularity of the party, openly advocating against migrants in the country. In 2015, Sweden came about 160 thousand asylum seekers, more people per capita than any other Western European country.

On Friday continued a series of bloody attacks that killed dozens of people. The victims followed, one after another of the blasts in two Egyptian churches on palm Sunday were more than three dozen people. It was the bloodiest attack on the Coptic Christian community in the country in recent years. Responsibility for attack was assumed by “the Islamic state”.

“Al-Shabab” (the banned terrorist organization — approx. ed.), a fundamentalist group of jihadists, said that she was behind another attack at the weekend, during which a suicide bomber rammed a minibus. His target was the new warlord of Somalia, but killed at least 16 people. In neighboring Norway terror alert raised after a suspicious device in the centre of Oslo. Just a few days earlier, the United States gave the order to launch missiles at Syria in response to deadly attack with chemical weapons.

For Sweden, which largely avoided such incidents, any political tensions caused by the terrorist act on Friday, may have serious consequences. A minority government faced with opposition that threatened to abandon the traditional approach to consensus legislation.

First of all, it can become a new impulse for the “Swedish Democrats” party, which opposes immigration, which is now the third largest in the polls. The growth of its popularity already makes the dominant opposition to reconsider a promise to never cooperate with the party.

Disagreement as to how to integrate immigrants, for whom Sweden was allowed to stay, has led to a deadlock in Parliament. In Sweden, the highest unemployment rate among the Scandinavian countries, about 7%, and unemployment among young immigrants is much higher.

Moreover, the opposition threatens no-confidence vote if the government led by the social Democrats, the schedule of planned tax increases for workers and businesses. The administration wants to use the money to improve the welfare, including payment of asylum policies.

According to one of the leading economists of the country, how Sweden will cope with the immigrants, will ultimately determine the vector of development of the economy of Scandinavia in the future.

“A failure to integrate will mean that social and political risks in society are growing, and the disappointment can become a driving force of extremism,” said Robert Bergqvist (Robert Bergqvist), chief economist at SEB AB, phone. But “I’m not sure that we could have prevented this act of violence through better integration,” he added.