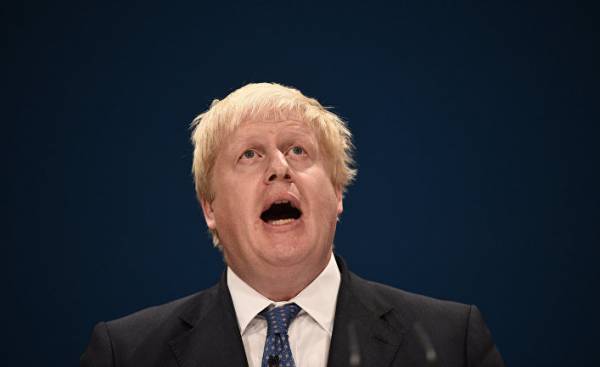 We must punish Russia for supporting Assad, according to Johnson, Western great Britain led the campaign about imposing additional sanctions on Russia.

As the escalation of the conflict in Syria, Britain convinced the Western countries to impose on Russia a new sanctions if it does not cease to support President Assad.

Russia and Iran warned yesterday, April 9, that they will “respond with force” if the United States continues to inflict strikes on Syria. The Russian Embassy in London suggested that if Moscow will receive this week an ultimatum, it could lead to “real war”.

Boris Johnson (Boris Johnson), the Minister of foreign Affairs of great Britain, demands that Western countries have developed a “very punitive” in response to the chemical attack on the area held by the rebels, which killed up to 90 people. Document on sanctions had been prepared for the meeting of the foreign Ministers of the group of seven in the Italian town of Lucca, which will begin today, April 10. The foreign Minister believes that the chemical attack and rapid use of force by President trump, who at Syrian airbase was released 59 missiles, is a new opportunity to alleviate the suffering of the country after six years of civil war.

Mr Johnson wants the Seven issued a joint Declaration that Russia must stop supporting the Assad regime and to withdraw its forces from Syria to could return convoys with humanitarian aid. If President Putin refuses to fulfill these requirements, then against Russia, in addition to the already existing sanctions in connection with its invasion of Ukraine, will introduce new, the purpose of which is to “greatly complicate the life of” her

high-ranking officials. According to the UK, Russia is responsible”part-time”, as expressed yesterday by sir Michael Fallon (Michael Fallon), the Minister of defence of the United Kingdom, for the chemical attack. One source suggested that Russia was unable to take any action, having received information about the impending chemical attack.

The Minister of foreign Affairs works closely with his American colleague Rex Tillerson (Rex Tillerson) in an effort to provide public and personal influence on Russia in order to stop supporting Assad. Ministers will meet today with his counterparts from Canada, France, Germany, Italy, Japan and the EU to agree on a joint action plan. Mr. Tillerson on Wednesday, April 12, will have to send this message to Moscow.

U.S. Secretary of state was in agreement with the position of Mr Fallon, saying that Moscow should be held accountable. In the program “Face the Nation” on CBS, he said that Russia “played for quite a long time in the role of a cover for Assad and its actions.” On the question of the possibility of an invasion of Tillerson said that “the primary objective” of Washington in Syria to defeat ISIS (declared a terrorist organization and banned in Russia — approx. ed.)

The US administration confirmed that it is considering the introduction of new sanctions. Nikki Haley (Nikki Haley), US Ambassador to the UN, told CNN that the “issue is never off the table” when it comes to tightening sanctions against Russia and Iran. Mitch McConnell (Mitch McConnell), Senate majority leader, also said he will consider the possibility of tougher sanctions against both countries. The leaders of the UK, however, expressed doubt that the threat of imposing new sanctions will be able to exert the necessary influence. On the 10 Downing street does not comment on whether Theresa may (Theresa May) the initiative of Mr. Johnson on the introduction of new sanctions against Russia. One former diplomat said that the sanctions will not take effect until the West can not cope with gas dominance of Russia in Eastern Europe.

Andrew Mitchell (Andrew Mitchell), a former Minister of international development, long-acting in connection with the events in Syria, said that if Russia refuses to cooperate, the West needs to supervise a no-fly zone. “The best way to move forward would be the adoption of measures to Russia, Iran and Turkey have carried out a promised truce,” he said. “If they fail to do this then America and its allies organize a no-fly zone, especially on Idleb and will move to implement the necessary agreements in the area of security.”

The attack in Damascus killed at least 20 people