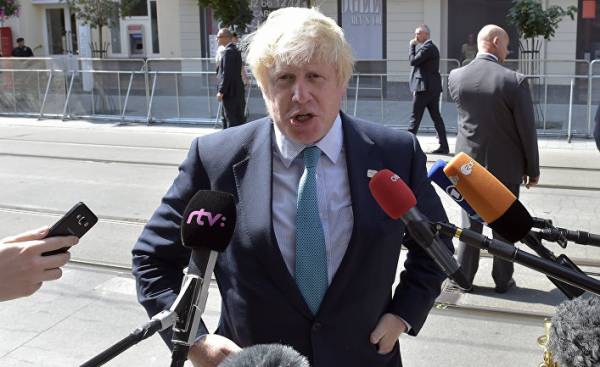 The aggravation of the Syrian conflict has caused a crisis in British foreign policy. On Tuesday, the foreign Minister, Boris Johnson had to cancel his planned Monday trip to Moscow. Obviously, as British Prime Minister Theresa may, and allies in the United States have decided to avoid media hype associated with the visit of Johnson, who, being a journalist by training, is known not only for his diplomatic abilities as overly loud statements. So, the press and leading opposition politicians called it a “poodle trump”.

After the alleged use of chemical weapons by the troops of Syrian President Bashar al-Assad London welcomed the missile attack of the USA on the Syrian air base. In addition, the British have expressed concern about Moscow’s actions supporting Assad. So, the Minister of defence Michael Fallon (Michael Fallon) wrote in an article for the Sunday Times that Russia is standing behind Assad, responsible for the death of every civilian and every war crime the Syrian regime.

His refusal to travel to Russia Johnson explained how a real politician: according to him, he wants to prepare for the scheduled for Tuesday in the Italian town of Luca to the meeting of foreign Ministers of the G7 countries. The participants must formulate “a clear and coordinated message to the Russians” that the Secretary of state Rex Tillerson will give the Russian side in the framework of his scheduled Thursday visit.

It is likely that last week, there were a lot of hot backroom meetings. Johnson in the role of diplomat, it seems, do not appreciate neither his own office nor Downing street is the residence of the Prime Minister. As for the Russian, which at the last moment, warned about the non-arrival of Johnson, they sarcastically replied that the cancellation of the visit suggests that Britain in the world politics plays no role.

Similarly expressed and representatives of the opposition in the lower house of Parliament. Alex Salmond (Alex Salmond), the foreign policy representative of the Scottish national party SNP, said that Johnson looks “stupid”, and his political reputation suffered “serious damage”. The leader of the liberal Democrats Tim’s farron (Tim Farron), in turn, caustically noted that “the Washington poodle” allows Americans to make his comments about his work schedule: “Pretty disgraceful when even trump thinks he’s a clown.”

The labour party — the biggest opposition forces — was not a unified position on this issue. The foreign policy representative of the party of Emily Thornberry (Emily Thornberry) refrained from any criticism of Johnson, but the shadow Minister of Finance John McDonnell (John McDonnell) said that Johnson, having cancelled the visit, made a mistake and “now would have to be in Moscow to condemn the Russian.”

Trip ardent supporter of Breccia in the Russian capital would be the first visit of a British foreign Minister in five years. Relations between London and Moscow over the crisis since, as the Russian special services in 2006 was poisoned in London of former KGB agent Alexander Litvinenko, who collaborated with British intelligence services, with radioactive polonium-210.

In the framework of the EU and NATO, the British consistently advocated tough sanctions against Russia after the annexation of Crimea. Recently, Johnson together with his Polish counterpart visited Ukraine with “solidarity visit”. In addition, Britain sent its troops to the Baltic States.

The most magical place on Earth: the river Chinatown