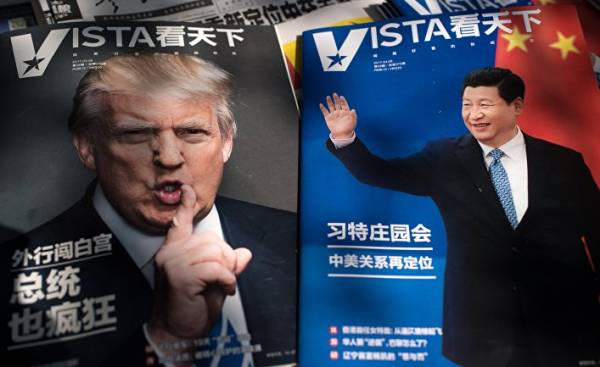 From 6 to 7 April at the residence of the Mar-a-Lago hosted the first meeting between Chinese President XI Jinping and U.S. President Donald trump attracted the attention of the world.

The unpredictability of domestic and foreign policy of the US that existed since the election of President trump, has created serious uncertainty for the international system. And China is doing their best to co-create the new world order and strongly leading economic globalization, in turn, is the contemporary world’s most stable and certain power.

Of course, the meeting of the two leaders of opposite poles serves as a reference for the future international order.

The last five months, the Chinese side has constantly been in touch with America and especially with the team of trump, and, to the extent possible, tried to reduce the uncertainty in the relationship, and thus set a good start.

The meeting between the two leaders increased the level of intimacy and trust between the countries, and the trump in turn had received from XI Jinping invitation to visit China. Thus, there has been increased and the overall trend in the transition from a “good beginning” to “the favorable development” of relations between China and the United States.

Meeting trump and XI Jinping has clearly demonstrated a profound change in relations between China and America. In contrast to the administration of the tramp, still plodding foreign policy, China gradually takes on the role of “patron” and is of Chinese-American relations towards a stable deepening and development.

During the meeting, XI Jinping stressed that “cooperation is the only right choice for China-us relations”, thus indicating a strategic direction of sustainable development of their interaction. And such simple statements as “we have a thousand reasons to establish Chinese-American relations and there is no reason to spoil them”, stressed the importance of stabilizing Sino-American relations for the two parties, the region and the world.

Pointing a certain direction of development, XI Jinping comprehensively explained, what is future “path of cooperation” between China and America. First, it is necessary to maintain a favorable interaction between heads of state, thus directing the close cooperation and message on all levels. At the same time, it is necessary to carry out the actual communication with the help of such new mechanisms as the “dialogue on diplomacy and security”, “comprehensive dialogue on economic issues”, etc. These dialog mechanisms based on the principle of separation and more specific detail, exactly meet the requirements of the development of Sino-us relations.

In addition, the Chinese leader offered to extend cooperation to multilateral and global framework to strengthen contacts in such multilateral mechanisms as the UN, G20, APEC, and jointly safeguard world peace, stability and prosperity. XI Jinping expressed the hope to strengthen mutual trust in the sphere of security and a high degree of cooperation between the armies of China and America as well as cooperation in the framework of “One belt, one road”.

China’s attention to these most pressing issues of Sino-us relations shows his active leadership role. In the issue of the intertwining interests of China and America in the trade and economic relationship China is proposing to expand the volume and to dilute temporary difficult to resolve differences between China and America strengthening of business cooperation in the field of trade, investment, energy and infrastructure construction. This specific way of implementation put forward at the meeting suggestions Jinping “bake a big cake of cooperation.”

Rome was not built in one day. One successful meeting trump and XI Jinping are unlikely to fully resolve long-existing problems of Sino-us relations, but in the eyes of the world China is facing America and the world, wrote the correct prescription for the treatment of Sino-American relations and the most pressing problems.

Hacker attacks in the world: how and why cyberpony intervene in political processes