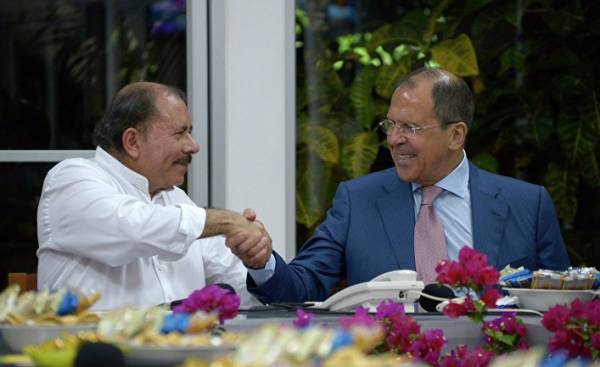 Managua, Nicaragua — At the foot of the volcano, can be clearly seen from the U.S. Embassy, landscape designers finalize the arrangement of a mysterious new Russian building complex.

Behind a concrete wall and barbed wire, the visitor will be able to see the red-and-blue buildings, neatly trimmed lawns, antennas and satellite dishes. The government of Nicaragua says that this is just one of the venues for the Russian version of the satellite system GPS. But could it be that this complex will serve as the intelligence base, where Russian will be able to spy on Americans?

“I have no idea, — said the employee of the telecommunication Agency of Nicaragua, located on this territory. They are Russian, they speak Russian, they use Russian equipment”.

Three decades later after this small country in Central America has become the prize in a cold war with Washington, Russia has once again raised its flag in Nicaragua. In the last two years the Russian government was engaged in strengthening the partnership with the country security, selling it tanks and weapons, sending troops there and creating centres for the training of staff and structures to combat drug trafficking.

The influx of Russians in Nicaragua, apparently, became part of the expansionist foreign policy of the Kremlin. In other parts of the world, the administration of President Vladimir Putin used the bombers to help the Syrian regime to strengthen its position, intensified its peacekeeping in Afghanistan, and annexed the Crimean Peninsula and supported Ukrainian separatists.

“Undoubtedly, Russia has developed rough activity, and it is now in full swing,” said a senior us official who has information about the state of Affairs in Central America and agreed to give an interview on condition of anonymity.

While politicians in Washington are trying to understand possible relationships of team members trump with Moscow, U.S. officials also speculate on the likely intentions and aims of Russia in the countries with which Moscow had previously maintained cordial relations. Current and former American officials suspect that the new Russian complexes can have a “dual purpose”, that is used for surveillance of the representatives of the United States. Military analysts believe Russia’s actions in Central America, possible a response to the growing US military presence in Eastern Europe, designed to prove that Russia is also able to get close to the US border.

According to American officials, long concerned about the growing presence of Russia. However, they remain vigilant. The state Department has already appointed one of the members of the Russian Department Desk officer for Nicaragua, partly because of her past experience. Some American diplomats sent to Nicaragua, speak Russian and been in Moscow.

Representatives of the President of Nicaragua, the ministries of defense and foreign Affairs, as well as the police refused to answer questions for this article. Russian Embassy in Managua did not respond to our requests.

Spy game in the struggle between Washington and Moscow is familiar to Nicaragua, a country which for its size is not more of Alabama and who was directly involved in the cold war. The Soviet Union and Cuba provided soldiers and considerable funds to assist the government of Daniel Ortega and his Sandinista front of national liberation after 1979 they overthrew U.S.-backed dictator Anastasio Somoza (Anastazio Somoza). The CIA supported rebels, called “contras” who started the war against the Sandinistas, which killed tens of thousands of people.

The collapse of the Soviet Union put an end to the conflicts of the cold war. However, in the past ten years, especially under Putin, Russia sought to increase its influence and presence in the world. In Latin America, Russia has sold Venezuela weapons worth several billion dollars. Russian helicopters used by the military in Peru, Argentina and Ecuador. Although the volume of trade of Latin America with the US and China far exceeds the volume of trade with Russia, Moscow has managed to strengthen economic ties with several countries, including Mexico and Brazil.

When Ortega was re-elected in 2006 after a hiatus length of 16 years, Nicaragua has again become a friend of Russia in the region. First, these new relationships were almost exclusively civilian character: Russia supplied wheat and sorghum in Nicaragua, which remains one of the poorest countries in the Western hemisphere. Russia also gave Ortega’s government a few hundred buses, and now she’s building a factory there for the manufacture of vaccines.

“Economic cooperation was only a facade, — says Roberto Orozco (Orozco Roberto), Executive Director of the Centre for investigations and strategic analysis in Managua. — Actually achieve an active Russian military presence in the country.”

Over the past few years this cooperation has acquired a military character. In 2015, the Parliament of Nicaragua, where most of the seats are occupied, the Sandinistas, passed a resolution to allow Russian ships to enter the ports of Nicaragua. Earlier, it approved the agreement, allowing to patrol coastal waters. Russia started to supply in Nicaragua, armored vehicles, aircraft and mobile rocket launchers. She gave Nicaragua 50 T-72 tanks, which Ortega revealed at a military parade in Managua than provoked criticism from the public. Military leaders have long felt a connection with Russia, as they used Soviet weapons to fight with the contras, and often were educated in the USSR.

When Venezuela was on the verge of economic collapse, and Cuba established relations with the United States, Ortega’s government was the most stable ideological ally of Russia in the Western hemisphere.

“The most fruitful and the most rapidly evolving political relations of Russia began her relationship with Nicaragua,” said Evan Ellis (Evan Ellis), Professor of the Military College of the United States. Last year him and two employees of the American customs was expelled from Nicaragua, explaining that they needed to notify in advance the government of Nicaragua of its presence in the country.

According to experts in the field of security, in Nicaragua, now there are about 250 Russian military.

Jacinto suárez (Jacinto Suarez), head of the international Affairs Committee of the Parliament of Nicaragua and an ally of Ortega, said in an interview that relations with Russia is a natural consequence of the relations that country has established in the 1980-ies. He rejected the rumors about the “non-existent military threats.”

“Remember the hype around the Russian tanks,’ said Suarez. — But nothing happened. When the tanks arrived, everyone was shouting that the coming war”.

Current and former American officials have widely differing theories about Putin’s intentions in Latin America. Some believe Russia’s actions are a response to the decision of the Obama administration to send more arms and military in the countries of Central and Eastern Europe. Others are concerned that Russia may pursue a more ambitious espionage purposes, including the interception of Internet traffic from submarine fiber optic cable laid from Miami along the coast of the Caribbean sea. In addition, there are rumors that a new satellite platform at the crater of the volcano Laguna de Nejapa will be used as intelligence center, despite all the statements of the government of Nicaragua that is part of the GLONASS system, the Russian equivalent of GPS.

Juan Gonzalez (Juan Gonzalez), who had the ball as the Deputy assistant Secretary of state for Western hemisphere Affairs under the Obama administration, first skeptical of the theories that Iran, China and Russia pose a threat to US security, while intensifying its activities in Latin America. However, over the last few years he changed his mind, observing the activities of Russia in Nicaragua and neighboring El Salvador. (Prime Minister of El Salvador in March visited Moscow to discuss trade and investment agreements.)

“The United States and other States in the region need to be alert, said Gonzales. Nicaragua offers Russia a platform to expand its intelligence capacity and to interfere in the election in the immediate vicinity of the borders of the United States”.

Hugo Jimenez (Hugo Torres Jimenez), a retired Brigadier General and member of the opposition in Nicaragua, believes that Ortega is establishing relations with Russia, because “it seeks to attract the attention of the international community sees the Putin government the reincarnation of the former Communist regime.”

Increasing presence of Russia in Nicaragua coincided with a downturn in relations between Washington and Managua. Last summer, the Supreme court of Nicaragua and the electoral Council of the country — the true Ortega — prevented leading opposition candidate to take part in the November presidential election and ousted the opposition parliamentarians from the National Assembly. Ortega was re-elected for a third term in the framework of the vote, which the state Department called undemocratic and unfair.

This week in the House of representatives is considering a bill that attempts to block funding for Nicaragua from the international institutions in case, if Ortega refuses to carry out the country’s democratic reforms. Last year the Obama administration quietly persuaded the inter-American development Bank to postpone the granting Nicaragua a loan in the amount of $ 65 million, to demonstrate dissatisfaction with the elections in the country, as reported by a former American official, who wished to keep his name secret.

The presence of Russians have mixed feelings about the inhabitants of Nicaragua. Some believe Moscow’s longtime ally. Others worried that the government of Nicaragua could use the new Russian equipment to spy on his critics.

53-year-old bus driver Nelson Perez (Nelson Perez) wanted in Nicaragua arrived more advanced buses than made in Russia KAVZ, which he drives through the streets of Managua.

“They are not suitable for our climate, they are overheating,” he explained. He also complained about the narrow door, flimsy mirrors, leaky roof and Windows. “They are uncomfortable”.

In the heart of Las COLINAS, is nearing completion of the construction of a four-storey building of the centre for combating drugs, headed by Russia. The security guard of a residential building, located opposite, doubt that happens something good.

“They say it’s a center for fighting drug trafficking, he said. — And the poor people never received from Russia”.