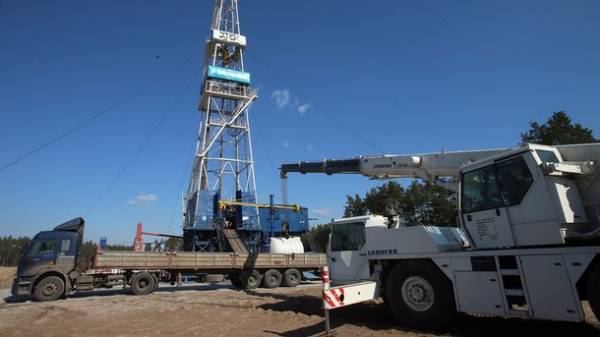 Imagine a pine forest, through which ravnachka the paved road abutting the industrial site. Already at the entrance you see a derrick — the 54-meter-long, deceptively delicate, decorated with posters of “DTEK”. The tower is surrounded by arrays of pipes, lying on pallets. It faces a huge truck of the geophysical party, which is both the lift and the lab: industrial geologists just doing research to collect a variety of parameters, curves and know what’s going on at a depth of almost four thousand meters. And the car, a few meters away, is a complete village with everything you need. The correspondent of “Today” spent the day on the rig, I learned that geologists investigate and find out how people live who are directly involved in our energy independence. 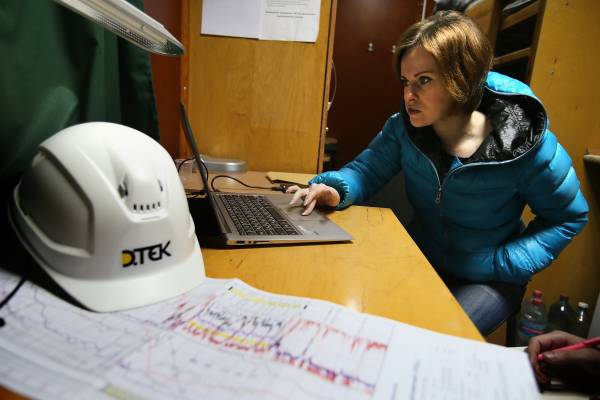 A modern industrial town located at the well No. 34 Semyrenkivske field (Poltava region) resembles the settlement times of the Wild West. And I think space expansion in earth-like extrasolar planets (those on which there is breathable air) will look approximately the same. Thirty of the metal carriages, which are home to more than a hundred people form a mini-streets, intersecting at right angles. In the center of the carriage head rig. Following on the huge viewports; kitchen-dining room. Directly in front of her “house” housekeeper, which is responsible for the comfort and improvement. All of this crosses the “main Avenue” connecting the output to the rig with the “out of town”. The streets are paved with concrete slabs. 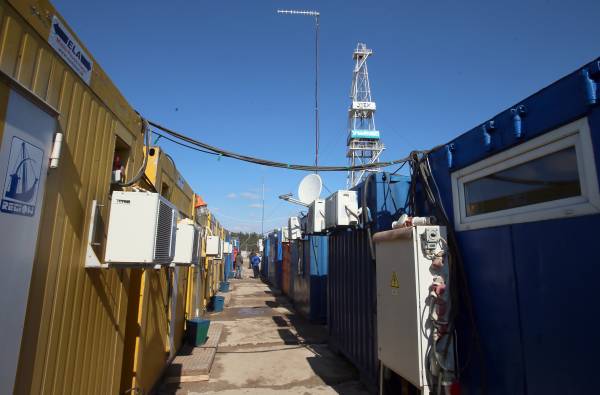 Like in every Ukrainian city, “the pavement” is not everywhere, some trailers set later, so between them the sand, covered with “Islands” of iron & wooden pallets. Electricity from a local substation, water — own, from a drilled well. And the taste is not inferior to the mineral water sold in stores, except a little softer. A couple of cabins reserved for showers (full cab!), there are sinks and washing machines. A number of “houses” laboratory, “observation posts”, offices and other specialists needed during drilling of the room. And below us, more than five thousand meters, is the most precious resource — the gas, hiding in the pores of the dense layers. 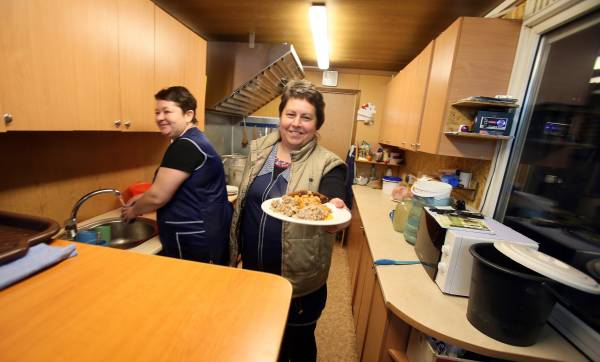 So far, however, to him away: drillers reached a depth of 3842 meters and stumbled upon a hard rock. Had to remove the chisel (the same “drill”, which bites into the ground), which erased almost to the ground, and to change it. That, in turn, gave to geologists and geophysicists the ability to perform their research.

Drilling began on January 25. Before it was exploration, seismic studies, based on which the geologists have decided where to start spudding. Just work released 160 days that such depths is incredibly fast. Before, says the supervisor, Roman yatsyshyn, similar wells drilled a year or more. 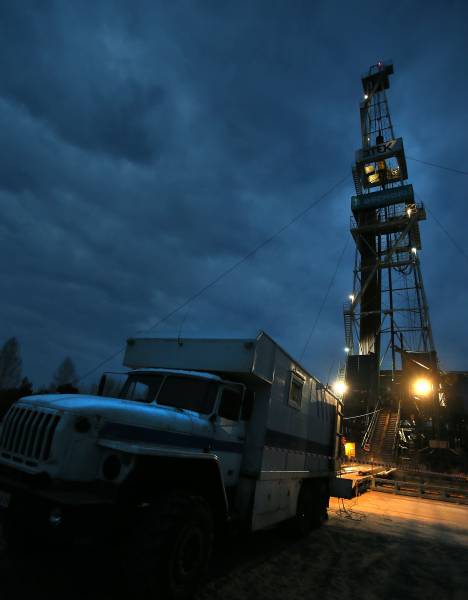 The machine of the geophysical party. Equipped with all the necessary

The process looks like. A powerful mechanism that spins the drill bit (about 180 rpm), which bites into the ground. In parallel, to maintain the pressure in the well bore, is prepared and pumped drilling mud. At first, this mixture of clay and water. Then goes down the first 20-meter column of pipes. Its purpose obvious from its name. In the “direction” is the second column — a 300-meter, which is called “the conductor”. Its purpose is to cut off the aquifers. Deeper — a few kilometers the first technical column. Then another, maybe another — and finally drops the “shank” directly into the gas reservoir. Prior to the installation of the conductor drilling mud — the same clay emulsion that the chemicals did not get into the aquifers. Further, use of special polymers. Is increasing with the depth as pressure and temperature: at a depth of 3800 — there are already 90 degrees, and the boiling water should not, on the contrary, the bit which is spinning at a speed of 180 rpm, it is necessary to cool.

All this “telescopic fishing rod” carefully cemented outside to the contents of the upper strata is not crumbled down. Cementing, by the way, saves water and groundwater: they won’t go down, and remain where they were. All these stages (with speed, load and other parameters) listed in geological-technical outfit and project, which are posted in the office of the supervisor. From the side it looks like a thin needle pierced the ground. 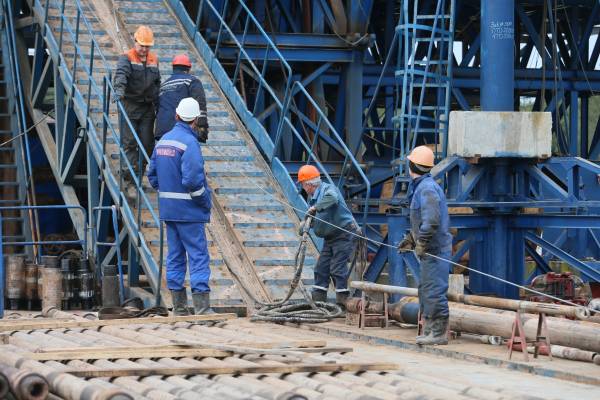 In the work. Specialists prepare the Assembly to descend in the well bore

The truck engine of the geophysical party growls, dropping into the ground three-core armoured cable, at the end of which is measuring a “queue” (because the principle is reminiscent of “woven” maiden spit), she — Assembly: a 32-meter “tube” made up of interconnected devices.

— Now is logging, geological and geophysical studies, explains senior geologist DTEK Neftegaz Julia Ignatochkina, fragile girl, not like the extant in-memory “canonical image of the geologist” — a huge bearded man with a backpack and a hammer for selection of species. Modern geologists only smile when I hear these stereotypes, they say, when something, maybe it was, but geologists gas companies do not care: it is important to know the regularities of the development of deposits, all methods of research of wells, to provide both smooth operation and environmental safety.

Geological and geophysical studies, as Julia told us, is a complex of physical methods used to study borehole and the borehole environment. The term “logging” refers to commercial (drill) Geophysics. He came to us from France, where the word la carotte (carrot) in the jargon called a core — sample of the breed that rises to the top for research. Experts, which selects the core, called “morkovnikov”. But this word has another meaning — so French called petty crooks. The first methods of logging, the Schlumberger brothers invented and designed to reduce the time for study was not very accurate because of Caramanico for a long time called “scams” — sometimes jokingly and sometimes seriously. Of course, methods a long time ago has changed, logging has become an integral part of industrial resource extraction and the precision and detail is so high that allow to determine with accuracy up to centimeters of depth of the reservoir, but the nature of its saturation. But the word has taken root (although even at home, in France, these methods are called des diagraphies — geograficheskie).

Now lift down the Assembly geophysical instruments, after which recording starts, — says Julia. DTEK Neftegaz she works for two years. Before that seven years in the North of Russia, where he worked in Schlumberger (named for those brothers) on gas and oil wells. Recording, that is, the registration of the instrument signals will be done on the rise. Now research is applied electrical method.

The rate of rise of the probe depends on the method. It ranges from 450 to 1,000 meters per hour. Now would be a lifting Assembly, consisting of an inclinometer (determines the angle and direction of tilt of the trunk) and instrumentation “electrical method”, which measures the resistivity of rocks, so (because of a known limit values for different rock types) is known, which layer is around and what it is saturated: water, gas, or solid. In addition, there is a “caliper” — resembling a spider probe, which determines the diameter of the uncased borehole and its changes along the barrel.

— There are many other methods of research of wells and their varieties, explains Ignatochkina. — Study of electrical resistance, with the help of induced currents it is possible to determine the conductivity of rocks… Logging based on the use of natural and artificially induced processes occurring in the nuclei of atoms, rocks and saturating fluids. There are acoustic logging, which studies the elastic properties of rocks. The point is that one curve is impossible to say that is around the trunk, so we write a set of methods that directly or indirectly confirm each other.

Julia deploys PivotChart well, resembling a combination of ECG, EEG and other investigations, where unknown ordinary mortal curves are added in a clear professional image.

Is adjacent the bore, 67. It already has a full pivot chart from zero to the 5580. At the 34th — also this will be, but we are not finished drilling. But neighbor can be used for correlation, they are close, so it’s easy to compare one with the other, moves his finger along the chart. — Here is the column of lithology — it shows the layers and what breeds they are composed, their thickness. And here’s what we talked about, Julia shows intertwining curves. 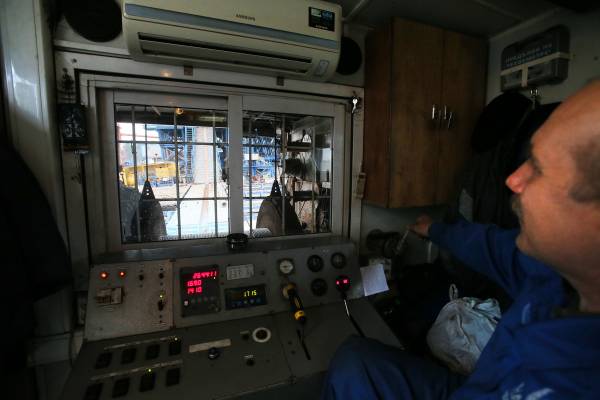 View from the inside. Geophysics watching the rise of the probes

In the trailer, standing at a little distance, — mud logging station (geotechnical investigations). They deal with technological control of drilling, but the main task — not to pass gas shows (emission of gas). In parallel, there are gas logs: selected washed mud rock (cuttings) to know exactly what is around, on the bottom of the well.

— Here is a claystone, white limestone, some clay, — shows us dried and milled into dust powder head for the GTI. — This is just the last meters. The limestone is very solid because of high pressure — you’ve probably seen that bit… 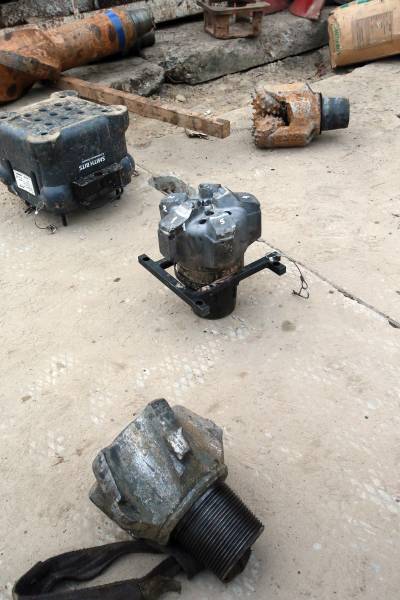 The bit after drilling… 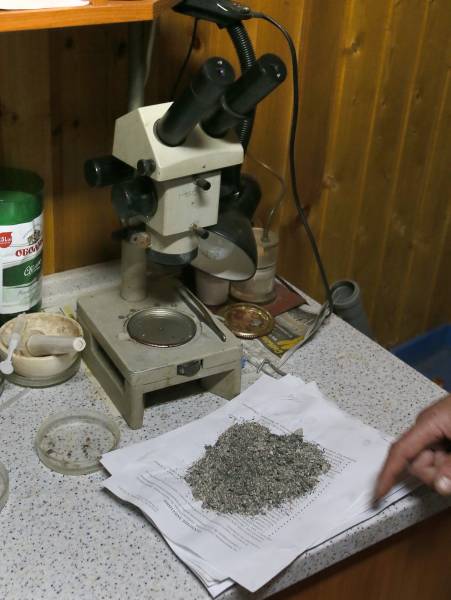 And the fact that it “erased” — hard limestone

Geophysical research — business not fast. Half a day experts lowered in the well bore two assemblies, each recording lasts for several hours. We had time to eat (very tasty cutlets with buckwheat porridge, cabbage salad, juice — all free of charge) and to communicate with the drillers. As it turned out, the special will or prejudice, there is no: in the first place — safety, which, in contrast to the “lift left foot,” the failure does not

— There is no romance — frustrating head drilling Andriy Kostyuk. — Hard physical labor in summer and winter, in the snow, and oppressive heat, and rain. The only luck you can not, as they say, “drill ahead”: say go, say, 10 meters per day. As we go, and go, make, work plan and safety.

Geophysics “folded” only to 23:00, and handed a printed chart of the results of research to engineers. And in time — the weather on the rig began to change in the blink of an eye.
Fifteen minutes ago the wind was throwing us in the face the whole sandy streams. Ten minutes ago on the iron roofs of the wagons banging big rain, we observed on the monitor of the supervisor. In black and white.

And here the silence around, which rhythmically revved up drilling rig. Right on the horizon lightning light up the star on top, and ahead, beyond the array of the town from the yellow and blue carriages, towers of the shining lights of the tower. There working the night shift: down inside the barrel of the drill pipe with a new bit. The rest of the town was quiet and at rest, although some of the Windows, including the alluring scent of fresh meatballs the kitchen, glowing.

Here for a day understand how there style of music “industrial”: toward a dimensional roar of the drill, mixed with the roar of diesel engines supply the power units. At first I could not sleep the habit, but the morning was basking in bed under the cat’s purring huge mechanisms. The wind dispersed the clouds, the area flooded by the sun. The tired drillers had gone to bed, the day shift began work. So there is always the work never stops for a minute.