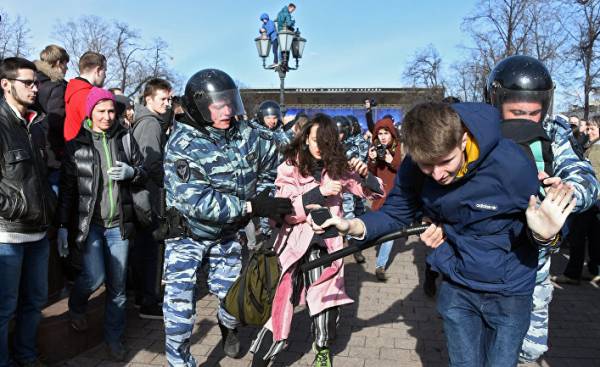 At the end of March to protest against corruption all over Russia came about 60 thousand people in more than 80 cities of the country. Most of the protests were not coordinated with the authorities. The largest took place in Moscow (about 15 thousand participants, 1030 people were detained) and St. Petersburg (up to 10 thousand participants, 131 delayed). According to witnesses, a significant number of participants were youth.

These March promotions fit into the overall logic of the gradual growth of protest activity in Russia, which is observed the last couple of years. A month ago, a March in memory of Boris Nemtsov gathered about 15 thousand Muscovites; in St. Petersburg since the beginning of the year has passed several major acts against the St. Isaac’s Cathedral, the Russian Orthodox Church. The next day after the anti — corruption rally-March 27 — began another nationwide strike of truckers against rising road payment system “Platon” (cause the previous one was described earlier). In Moscow and other cities regularly hosts dozens of small local campaigns. However, the size of even the largest of these protests, much less those that happened in Russia in 2005 or 2011-2012, therefore, can hardly be considered the March events to be a serious threat to the political system.

The legitimacy of power in the eyes of the population and the ratings of the first persons remain high because of their strength two to three years ago as a result of the annexation of Crimea to Russia. The economic crisis over the last couple of years has significantly undermined the confidence in the future and hit the incomes of Russians. However, people have had time to adapt to the situation, and in the past few months there has been a tentative recovery of the indicators of social well-being, increase optimism. The decline in living standards that has lasted the past two years, the beginning of spring, it seems to have stopped. So expect the rapid spread of the protests to the size of five years ago is hardly worth it.

Features of the organization

New in the March protests was that for the first time in many years they were national. Rallies were held in many regions of the country and organized there was only one opposition team — a team of Alexei Navalny. The help of other democratic forces policy is not required. In a sense, Navalny did what six months ago was unable to carry out party democratic opposition during the parliamentary elections. Having started his campaign for the presidential nomination, Bulk actively travels to the regions, meets with supporters, responds to questions, demonstrates openness and closeness to people. And those who are accustomed to seeing Federal politicians on TV, such meetings are of interest. People of democratic views, especially in regions starved for attention from political leaders. And active campaign Bulk fills this vacuum.

A major role is played by the work of his team: there are political strategists, sociologists, cameramen, Directors, photographers, experts in SMM, fundraising, working with volunteers and the media. In this Bulk is far ahead of his rivals for the democratic wing of the party which you experience a clear organizational crisis, in need of updating and consolidation.

The protests on 26 March showed that Navalny became a leader of the democratic opposition and can count on the support of a significant part of their electorate. The problem is that the democratic electorate today does not exceed two to three million people. For the sympathy of ordinary Russians policy has yet to be overcome. And in terms of state control over television, which represents the Bulk only in a negative light, it will not be easy.

Today, only about 2% of Russians are ready to call the policy as its presidential candidate (among the youngest support Bulk a little higher). However, Navalny demonstrates that he is ready to work on a gradual increase in the number of his supporters. Held by him and his team rallies — the next small step in this direction.

The rebellion of youth?

Already the photos from the meetings Navalny and his supporters in St. Petersburg, Barnaul, Saratov or Volgograd, it was noticeable that the greatest interest these activities inspire young people. The same showed the March and rallies. In the whole Russian youth for the most part apolitical, supports the status quo and more satisfied with life than the average Russian. But examples of youth participation in political life abound.

Thus, many resonant political actions of Limonov in the zero years — the work of young people who at that time was a little over twenty. Given the prominence of the youth democratic movement “defense”. Young fans went on a spontaneous rally on Manezh square in 2010. An unusually high number of young participants at the first meeting of 2011 on Clean ponds. The students formed the basis of the street of the camp “Occupy Abay” in the capital in may of 2012 (many participants of the protest was barely twenty years old) — perhaps it was the first example of when along came political sense the Bulk and energy of youth protest.

According to our polls, at rallies of 2011-2012 young people under 25 years made up a quarter of the participants. According to the volunteer survey laboratory “untitled”, the first two marches in memory of Boris Nemtsov young people up to 18 years was about 5%. According to Gregory ohotina of OVD-info, the same proportion of juveniles (about 5%) were among the total number detained by police at Sunday’s rally in Moscow. In other words, young people have always made up a significant part of the protesters, and sometimes acted as the instigators of the protest activity. So the question is, why on Sunday lots of young people, we should add one more: why adult participants was less than usual?

One explanation was offered by Andrei Movchan, writing on the simplification and primitivization of the agenda of the meeting. Indeed, a serious person may seem pointless idea to come to the city center and walk along the street clockwise. To a teenager it can be even funny. Typing with a simple anti-corruption slogans, the youth, the organizers of the parallel lost part of the older generation. Could be the result of the fact that the majority of meetings were not agreed and experienced and careful adults chose not to be substituted. May have influenced the way of information dissemination through social networks. Most likely, the role played by the combination of several causes at once.

Published interviews with the participants of the March protests show that most of them have long been interested in what is happening, trying to understand the political events that lead conversations on these topics with friends and family. Therefore, at the meetings they feel at home, among friends. In most cases, the young people knew what they were and felt “their duty” and “citizenship” to protest against corruption and unjust state of Affairs in the country. For all its awareness and ideological charge of the young protesters do not always adequately assess the risks of participation in uncoordinated action. Detention, a trip in the paddy wagon and a night spent in a police station, for many of them was an unpleasant surprise.

The fact that young protesters had shown interest to politics, already suggests that they are only a small part of the Russian youth. Most of these topics boring, they live a private life.

From interviews with detained adolescents (and their parents) the impression that all the kids are from wealthy educated families. Their parents go to meetings themselves, talking to children about politics, democracy, and human rights. It turns out that the young demonstrators in their social status not much different from the usual contingent of democratic mass stock sample 2011-2012. They are characterized with a high level of education (young people — students or the potential to become) the middle or above, most steeped in political agenda. Them with a degree of conventionality, be referred to the urban middle class in the capital it is richer to poorer regions. And this is another reason not to distribute automatically the mood and motives of the participants of the meeting for all youth and the population as a whole.

Special role of Internet and social networks in the recruitment of participants in the March protests has been noted by many. Talking about themselves, participants of the meeting mentioned that with interest the activities of Navalny, read his website, watched a film about Dmitry Medvedev. Almost every regional rally on March 26 was a separate page in social networks, participants communicated with each other online, has posted a video about how teachers discourage them to go to protest rallies.

That the Internet and social networks used in Russia for political activities, is nothing new. This began at the rallies of 2011-2012. Since then, the social network actively used by political forces for recruiting participants for mass rallies and dissemination of information about themselves. However, over the past five years in the use of social networks has been a qualitative leap. From time to time, as often happens, these changes were unnoticed. And only the March of events made me pay attention to the incident.

To date, regular Internet users account for about 70-75% of Russians, social networks, such as 55-60%. But only about a quarter of the population use the Internet to learn the news. At the same time, regularly watch television news programs, more than 80% of Russians. Therefore, in the entire country, the state can fairly easy to set own agenda: that does not appear in the plots of television news, most simply do not know.

However, in the youngest age group, the situation has changed: almost all young Russian citizens, regardless of region, use the Internet and social networks. Find out news on the Internet among them, more than 70%, on TV — has only 60% (for minors, the gap should be even larger).

According to our measurements, the Internet as a news source ahead of the youth TV a couple of years ago. In the middle age groups have not yet occurred. Among older generations the Internet for information on current events using only a few percent, so depending on the TV here is still extremely high.

The first Russian politician who has managed to turn these changes to their advantage, became the Bulk. Here you have another explanation for why his call to go to the rally responded to a lot of young people. The government begins gradually to lose his monopoly on the formation of a pattern of the world in the youth environment. This process has only just begun, and most young people, like the population as a whole, is not ready to question the authority of the government and rulers. But the most active today have more opportunities to learn alternative points of view, but the majority can gradually get out from under the ideological indoctrination of the TV.

How to react to the changes the Russian government wants to increase the pressure on society and to impose new limits or try to look for citizens with a common language? In any case, to keep the status quo becomes harder and more expensive.