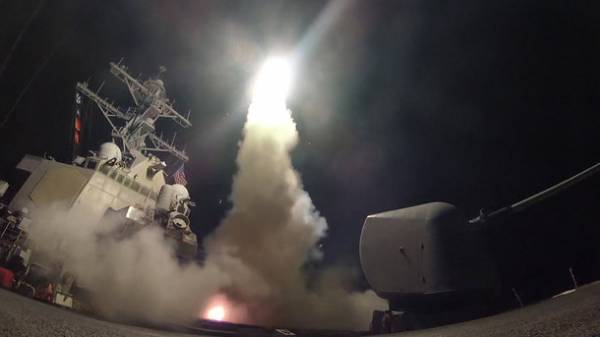 Missile attack on the United States air base Syrian government forces in HOMS may exacerbate the crisis in relations between America and Russia. Over the past few years is the most serious conflict between the two countries. However, experts believe that what will be the consequences of the situation for bilateral relations will become clear after the meeting between U.S. Secretary of state Rex Tillerson and Minister of foreign Affairs of Russia Sergey Lavrov, if it takes place.

US President, Donald trump has decided to launch a missile attack on the air base, “Sirat” in Syria in response to chemical attack in Idlib, which claimed the lives of at least 100 people. According to trump, this strike is a necessary measure to prevent further use of chemical weapons. After a chemical attack in Idlib. Photo: AFP

Rocket attack USA is not the first attack Syrian facilities. However, this is the first instance when the impact on the basis of government forces of Syrian President Bashar al-Assad struck America, says the expert of the Ukrainian Institute of policy analysis and management Mr Will.

Experts agree that the use of chemical weapons was not the only cause of the hard actions of the United States. The decision about the missile strike was dictated by the desire of trump to show a strong position against what is happening in Syria. Precisely because of the indecisive actions against this country, the current U.S. President criticized his predecessor Barack Obama. As told “Today” in international political analyst Anton kuchukhidze, the Republican party, whose representative is trump, shows that they are stronger and more result-oriented than the previous administration. Another reason for missile strike on Syrian airbase was the fact that the US is likely to want to revise the rules of the game in Syria, because a month ago they approved a program to defeat ISIS, says Kuchukhidze.

“It was a response to skeptics, critics, opponents, in the first place. Clearly, this has strained relations with Russia (which supports Assad – Ed.) but, however, in this situation, there is an interesting caveat – the Americans say they have warned Russia that there will be a strike on a specific object,” says Mr wild.

According to experts, the fact that the US warned about the planned attack on a specific object, suggests that it was some kind of concerted action that was not unexpected for Russia.

Russia’s leadership to the missile attack on the United States basis of government forces of Assad had responded dramatically. The Kremlin said that Russian President Vladimir Putin believes America’s actions of aggression against a sovereign state in violation of international law under false pretenses. 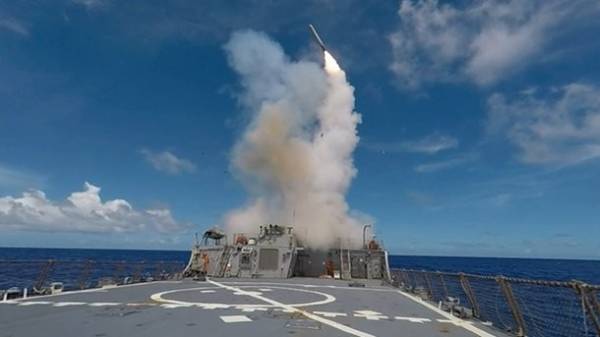 The launch of the American “Tomahawk” on the Syrian air base. Photo: AFP

“Obviously, the conflict increases, the level of controversy, because so far we can not say with certainty whether the Assad regime used chemical weapons or not. We see the positions of the two super players on the UN security Council – the United States and Russia – which have conflicting data. It was really we don’t know we see that played a political game,” says Anton kuchukhidze.

For the United States and Russia, Syria has long been an object of conflict of interest. At the same time, U.S. President Donald trump was more interested in the fight against ISIS, rather than Assad, says a political analyst Volodymyr Fesenko. Now, according to him, the situation escalated, and the conflict of interests turned into a crisis.

The fact that the conflict between the two countries is growing, seen on the level of political declarations. The Russian side suggests that it is an act of aggression against their ally Syria, says Anton Kuchukhidze. Moreover, Russia temporarily stopped the action concluded with the United States of the Memorandum on Syria. He called for preventing incidents and ensuring the safety of aviation operations in the country. According to Kuchukhidze, it talks about conflicts at the level of the military departments. Thus, from the point of view of diplomacy critical statements was not, he said.

“The degree of tension in relations between the US and Russia definitely increased because of this missile attack, says political analyst on international Affairs Vladimir Will, To open conflict it’s definitely not lead, although it looks like that came almost to a global confrontation. I think that these events in Syria is primarily seen in the context of internal political processes in the United States. Trump repeatedly lambasted Obama and the Democrats because they have shown weakness against Russia, the weak U.S. position, including on chemical weapons in Syria.”

I agree with this opinion and the political scientist Vladimir Fesenko. According to him, the situation between Russia and America is tense but to dramatize it is not necessary – the United States is taking the next steps, and Russia, in turn, will refrain from military response. According to Fesenko, an indicator of how the situation will develop, will be the question on the visit of U.S. Secretary of state Rex Tillerson in Russia, scheduled for April 12.

“If this visit will not be cancelled nor the American, nor the Russian side, it would mean that both sides are willing to escalate the situation, not to exacerbate this conflict confrontation and try to maintain relationships with each other and come to a dialogue and compromise, – considers Fesenko, But if the visit is cancelled, it will mean further development of the crisis and the intensification of conflict in bilateral relations.”

In case of cancellation of the visit Tillerson, all questions will be postponed for a few months before the meeting, trump and Putin, the analyst believes. 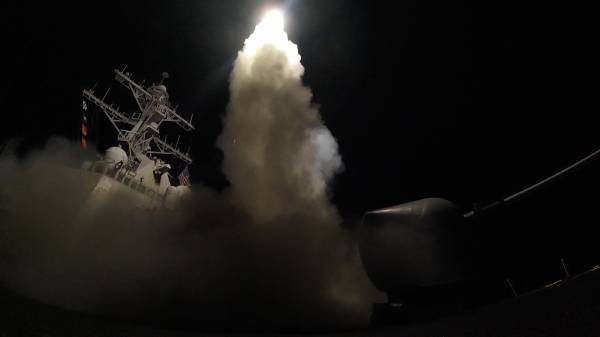 The situation in the international arena because of the growing conflict between the US And Russia will still be the same, experts say. So, according to Kuchukhidze, the coalition against ISIL will continue its work, including in Syria.

“As for the allies of Russia – they will not change. Main allies are Assad, Iran and Hezbollah (the Lebanese Shiite militant organization recognized by a number of countries terrorist – Ed.). The most interesting – how will behave the Turkish Republic. Against the background of statements about the termination of the operation “shield of the Euphrates” (a military operation of the Turkish armed forces and the Syrian forces in the Aleppo – Ed.) in light of the fact that they have a sort of rapprochement with Russia, large differences in the economic aspect, and the statement of the Turkish official that they are ready to support US in any possible new operations, it will be the most interesting moment,” he says.

Will not affect this situation and European countries, experts say. However, as noted by Mr Will, because of this conflict postponed the question of a political settlement in Syria and the refugee problem will remain.

Any attempt by Syrian President Bashar al-Assad to respond US going for him by mistake, said Fesenko. According to the expert, until recently persona Assad trump was not interested, but if he tries to confront the United States after the missile strike – trump will set a goal to achieve at least the political destruction of the Syrian President.

“Combat-capable military forces are Hezbollah, Iranian guard, who are out there fighting on the side of Assad, and the Russians. Assad, rather, played a supporting role, so he himself, without the aid or Iran, or Russia, can not answer”, – said Fesenko.

Recall that hundreds of Syrians died from the chemical weapons (presumably sarin gas) — after the bombing sites of the Syrian armed opposition in Idlib town of Khan shaykhun was covered with a poisonous cloud. According to eyewitnesses, people were dying from suffocation, many lying on the ground motionless, the other was observed vomiting and was frothing at the mouth.

On 7 April the US Navy ships stationed in the Mediterranean sea, struck by Tomahawk missiles at the air base the Syrian government forces. In all there were more than 50 rockets that were aimed at the runway, and aircraft Parking and refueling facilities.

The Governor of the Syrian province of HOMS said that as a result of strike killed five Syrian army soldiers and a senior General. In addition, another seven people were injured, among whom were civilians.