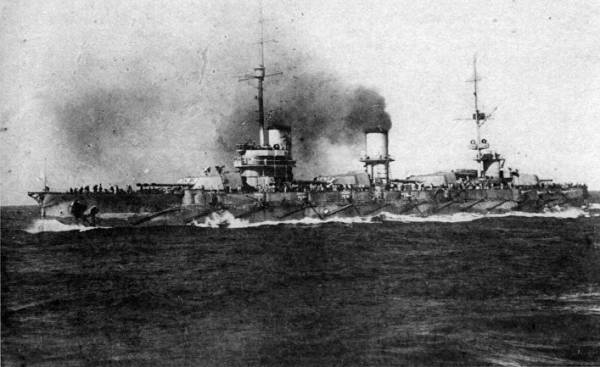 “Emperor Alexander III” was the third in the number of ships of class “Empress Maria”, dreadnought, launched in the Black sea and designed to fight the fleet of the Ottoman Empire. It was named in honor of Emperor Alexander III, who inherited the throne after the death of his brother in 1881 (actually the brother of Alexander, Nikolai, died after a short illness — approx. TRANS.). Although Alexander III was also carried out several assassination attempts, he died from natural causes in 1894. As a conservative, he reversed many of his father carried out reforms, which indirectly caused the revolutionary mood in Russia in the early 20th century. Vehicle design represented a superior class battleships “Gangut” (referring to which the ships were built in the Baltic States), but “Alexander” was carrying much heavier armor. This class of ships was equipped with twelve 12-inch guns (305 mm approx. ed), placed on four platforms at three of the trunk and distributed along the horizontal axis of the ship (they were in the same plane). With a displacement of twenty-four thousand tons, the ship could accelerate to twenty-two knots.

Because of the rivalry with the Ottomans, the black sea fleet remained the only Russian fleet, which was disbanded after the Russo-Japanese war. Ordered by the Ottoman dreadnoughts “Sultan Osman I” and “Reşadiye” (later renamed EVK “Agincourt” and EVK “Erin”) would provide the Turks a decisive advantage over the remaining in service five Russian battleships obsolete. “Emperor Alexander III” and two of his twin was supposed to solve this problem. After the war, the British occupied both Turkish battleships, but the Germans deployed the battlecruiser “goeben” allowed the Turks to maintain its presence in the Black sea. This meant that the situation is not too different from the expected Russian command.

Founded in 1911, the “Emperor Alexander III” suffered from a series of problems at the design stage and production, slowed the descent ship on the water. War-induced shortage of resources delayed the completion of work. In addition, in order to catch up with the Turkish forces, the Russian authorities have accelerated the production of two twins “Alexander III” the cost to “Alexander”. The descent of the two battleships on the water for a while to provide Russian Navy superiority in the Black sea, at least until an accidental explosion of “Empress Maria”, to equalize the forces of the parties.

The February revolution of 1917 exacerbated the chaos. The interim government has gained control of the “Emperor Alexander III” and renamed it the “Will.” Despite the fact that he was still not completed, the ship went to sea. However, at that time, neither the Provisional government nor the Bolsheviks managed to consolidate their power in southern Ukraine, and a few months later the “Will” was given one of the few independent Ukrainian governments that emerged after the revolution. Several months later, the inexorable advance of the Reichswehr ensured the Germans control over a large part of the Black sea. According to the Brest Treaty “Will” and it remained the twins moved to Germany. The revolutionary command of the “Free Russia” (as it was renamed “Empress Catherine”), ready to flood the ship, but he was captured by the Germans, renamed “Volga” and enlisted in the German Navy on 15 October 1918, is still incomplete. The Germans surrendered on 11 November 1918 and handed over “Volga” under British control. The British did not want to leave the ship to the Bolsheviks, and therefore took it in Izmir under the flag of the Royal Navy.

In 1919 Britain, the United States, France and Japan intended to suppress the Bolshevik revolution in the Bud through a combination of direct intervention and support of the White movement. The British handed over “Volga” white, who brought the ship in readiness and it was renamed “General Alekseev” in honor of the Imperial and counter-revolutionary Russian General Mikhail Alekseev. “General Alekseev” carried out the attack deployed on the coast of the Black sea forces of the Bolsheviks, while the Reds are not crushed by occupying the Crimea whites in the mid 1920. Escaping from Bolshevik tyranny, “General Alekseev” led the battered fleet, departed from Crimea and left the Black sea in November 1920. Nicknamed fleet, Wrangel (in honor of the last white commander, had remained in this region), he included “Alexeev”, the obsolete battleship, two cruisers, a dozen destroyers, four submarines and several small craft. In addition to teams of their respective ships, the fleet had a capacity of four and a half thousand refugees.

“General Alekseev” went to Bizerta, the French colony in Tunis, where he was detained by the French until 1924, in which France officially renounced the policy of containment of the Soviet Union and recognized the Bolshevik government. France and the Soviet Union could not come to an agreement regarding the return of the ship, partly because of its bad condition, and partly because of the demands of the French to pay the costs for its maintenance during the preceding several years. How the as “Alexeyev” was inferior to that of other old Russian battleships in the Baltic States is in question, and with some probability the Soviet Union would use it in the Black sea. In any case, “General Alekseev” were the French, who gradually dismantled it for scrap in Bizerte over the next decade.

Oddly enough, the story doesn’t end there. In early 1940, France has transferred the main gun battery “Alexeeva” in Finland to counter the Soviet invasion. Eight guns reached the destination, another four were captured by the Germans after the invasion of Norway. The Germans installed them in the coastal fortifications on the occupied island of Guernsey. The Finns used their six guns to defend the coast and as mobile artillery, in the end, losing two of them to the Soviet Union, which, in turn, used them as coastal artillery until the 1990s. One gun platform and one gun were the Finns and was placed in the military Museum.

The design of the ship with four gun platforms and a smooth deck was a dead-end and gave rise to a surprisingly ugly battleships. Given that in the interwar period, the Soviets failed to build a single battleship, it is difficult to judge how “Alekseev” and its sister ship influenced the production of the Soviet battleships. However, the fact that the Imperial fleet was built these obsolete battleships shows the direction in which were moving Empire before the revolution.

Robert Farley is a frequent contributor to The National Interest, is also the author of the Book “Battleships”. He is a senior lecturer in the School of diplomacy and international Commerce Patterson’s name at the University of Kentucky. His professional scope includes military doctrine, national security, and Maritime Affairs. He blogs at Lawyers, Guns and Money, Information Dissimination, and The Diplomat. 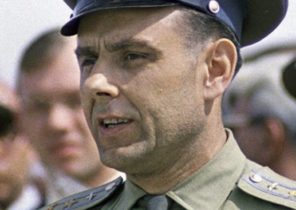