White cops get on his knees before the black man and woman and wash their feet. Carefully, very carefully. White woman speaks in a megaphone: “We are doing this to atone for the crimes of all whites.” To wash the feet, sinking to his knees, joins more police officers. One of them takes the megaphone: “It’s an honor for us — on behalf of the entire white race to apologize for our aggression and an arrogant willingness to believe that we are better than you”.

In another video from the white demonstrators are required to kiss the feet of black representatives of the movement “black Lives matter.” Police kneel. The mayor falls to his knees. All must kneel. Very strange religious wave swept over the United States.

In Stockholm, the crowd demands that the police at the Royal Palace on your knees. And here’s the first converts to the new religion: police officer kneels in front of the demonstrators, raising a fist up in support of “black power.” In the other hand she has a banner reading “white Silence is violence”. This means that white needs without any hesitation to support the movement “black Lives matter”, otherwise they will be considered accomplices in the murder of blacks.

Discussion is not the place, conversations between equals will not. Surprising that someone feels compelled to kneel.

Surprising that someone feels entitled to demand something from the white.

In Sweden demonstrate in support of blacks were held in Stockholm, Gothenburg and malmö. Although Sweden is one of the most affected by the epidemic of the coronavirus countries in the world and more than 50 people at once to gather should not, on the streets, thousands. The same thing happened in other European cities. Racism is pandemic, written on many posters. And what a real pandemic, remember? Real, due to a virus.

Yes, black lives certainly matter, nobody says the opposite. But surely due to the fact that the American police officer killed a black man suddenly devalued life at all?

What happened in Gothenburg? After attempts to disperse the demonstration, attended by thousands of people turned into riots. Several hundred protesters from the suburbs attacked police, smashed shops and looted the truck with the most ordinary family. And the owners were standing on the stairs of their house and helplessly watched.

Protests against police brutality basically showed that should be afraid of brutality protesters. A few young girls who tried to stop the hooligans to break the boulders on Gustav Adolf’s square, were beaten.

During the campaign “black Lives matter” in malmö from a guy of foreign origin interviewed “Swedish television”. What you want to achieve this, the reporter asked. “I want to be free,” replied the guy. That way of thinking can be traced constantly — both in Sweden and in other European countries. People just no reasoning adopt American ideas. As if there is no difference if you’re in the US on the ship of the slave trader in the eighteenth century or in the status of the migrant received a residence permit in Sweden 300 years later. As if to force to work in a cotton field — the same thing without any effort to enjoy the benefits of the welfare state.

The idea that white men are the unique possessors of guilt, not only dangerous, but also incorrect from a historical point of view. In countries where recently there is a stream of migrants to Europe, slavery had existed much longer and blacks were treated worse. In addition, many hundreds of years, until the mid-nineteenth century, as slaves were used and white. They were sent, for example, in North Africa and the middle East. So it would be to this day, if countries like USA and UK, not pressured. White has been on both sides of the fence. Not admitting it is to lie and distort history.

To protest against racism and police brutality and to demand equality right. Anyone who has seen the footage of the murder of George Floyd, admits that it’s awful. But now the meaning of the protests has already been given. We are no longer talking about equality. How can there be equality when people with a certain skin color are forced to kneel and ask forgiveness for this color, kissing the feet of those who have it is different. As if being born white is a sin that will never wash off.

Now demand not equality but subordination. And the most appropriate name for this position — racism.

The silence of Putin, NATO and the EU 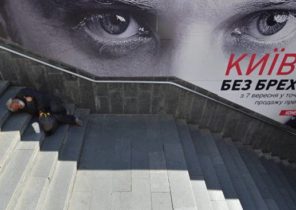