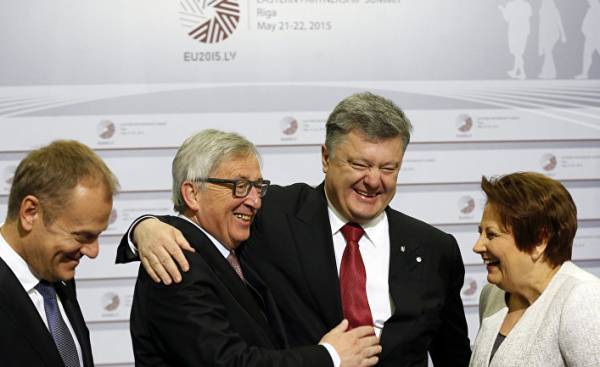 Why the European Union failed to provide long-term peace and prosperity with the help of the project “Eastern partnership”?

When the European Union in 2008 she created the project “Eastern partnership” with Armenia, Azerbaijan, Georgia, Moldova, Ukraine and Belarus, were high hopes for political transformation. However, so far none of the partnership countries with the EU in the long term is not contributed to peace, prosperity and stability. In a research project at the Free University of Berlin under the leadership of political scientist Tanya Barzel (Tanja Börzel) scientists are looking for possible reasons for such development. In addition, they ask the question, what opportunities exist to achieve goals in the future.

The project “EU-STRAT — EU and the Eastern partnership countries. Internal analysis and strategic expertise” is created in international cooperation of eleven universities and research centres. This includes partners from EU, Switzerland, Moldova, Ukraine and Belarus. Doctor of political Sciences Ademmer Esther (Esther Ademmer) from the Institute named after Otto Suhr, Free University of Berlin is the project coordinator for the scientific part.

The EU had underestimated the closeness of the former Soviet republics with Russia, says Esther Ademmer. “How big is the interest to have good relations with the EU as Armenia, Azerbaijan, Georgia, Moldova, Ukraine and Belarus — although to a different degree — are interested in good relations with Russia.” States often economically dependent on its big neighbor, but also closely linked with other countries, including Turkey and the United States.

“In the previous analyses the EU’s role was overrated, says the analyst. Our task is to examine the prospects of individual States”. This includes a General analysis of the economic and political system. “We want to know what incentives have the elite within the countries to implement political reforms.”

The starting point was the study of the American economist Douglass North (Douglas North). He shrugs a distinction between systems with “limited access” when the political elites control the economy and “open access”, which is dominated by political and economic competition. The first usually refers to developing countries, while the latter relates to the developed countries of the Western world. North describes two poles. The participants of the project EU-STRAT trying to classify the area located between them. “The goal is to better describe the system of Eurasian countries that are between systems that have limited access and open access,” says Demmer.

“Elite is not interested in free and fair elections”

In the countries under review, although formally there is competition, but de facto it is only in a limited way, says the researcher: “the Elites of these countries are not interested in free and fair elections”. But they cannot be equated with dictatorships, where changes are virtually eliminated.

“We want to perform, one of them — the player who in the countries of “Eastern partnership” could be in support of the political competition, and as such players could be strengthened,” says Demmer. We are talking about the need to understand not only the situation in these countries, but also to analyze possible effects from the EU. This applies to both policy and Economics.

It is necessary to analyse in concrete terms how to eliminate corruption and monopolization and turn oligarchic forms of economy in fair competition. “We want to understand where the points of influence for development in these countries, systems of open access, says Ademar. — But, of course, necessary and political will.”