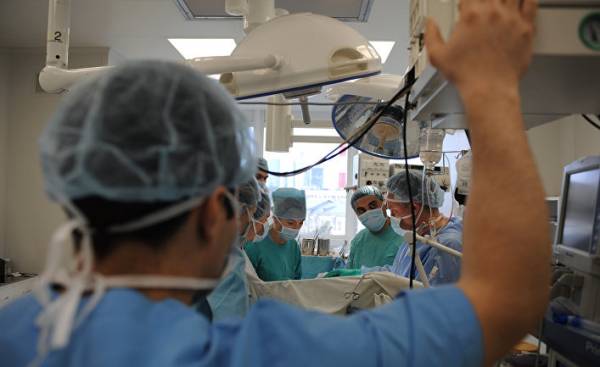 American neurosurgeons were not ready for this. In 2015 they have made an amazing discovery those suffering from refractory epilepsy patients. He had to surgically remove the lesion that was the cause of repeated seizures. In order to accurately outline the to be deleted area, doctors began to stimulate the brain of the patient for preoperative analysis.

It should be noted that the patient actively cooperated. He agreed to put on the head of a network of electrodes that are covered responsible for breathing parts of the brain. In addition, he agreed to wear the equipment led continuous recording of brain and respiratory activity. This allowed to determine the focus of epilepsy through electrical stimulation. Finally, the truly heroic, the patient agreed to multiple sessions of imaging.

The course lasted ten days of close observation, the patient survived nine partial seizures. Four of them led to a partial reduction of the respiratory activity. Two of the crisis began at the level of the right anterior lobe and moved toward the almond-shaped body, and then cover other parts of the brain. The amygdala is so named because of its shape and plays a critical role in the perception of emotions.

In seeking to understand the role of the amygdala in the acute stop of breathing activity during epileptic seizures, neurosurgeons have begun to stimulate this area with electrodes that were implanted in the left hemisphere of this extremely flexible patient. So they managed to establish that the cessation of breathing occurs immediately after the arrival of the pulse in the left amygdala. During stimulation of respiratory pause were each time 20 to 30 seconds, which invariably led to the loss of oxygen in the blood. Respiration rate was reduced from 17 breaths per minute to just one! Breathing arbitrarily was restored within 2-5 seconds after cessation of electrical impulse.

Now the most incredible. The patient (identified by the initials J. K.) did not feel the breath, although it was in a state of wakefulness. Even in the case when the duration of stimulation were 48 seconds, and caused a significant decrease in the level of oxygen in the blood, John. K. was not aware I had stopped breathing.

During stimulation by George. K. was very quiet. Despite the cessation of breathing, his face is not reflected, there was not a single sign of discomfort or shortness of breath. When the doctors asked him if he felt something unusual for the last minute, he said no. When no more began to ask him about his feelings and asked whether he had at some point, it is difficult to breathe, George. K. said that I felt nothing. Anyway, under normal conditions without stimulation the same patient was not able to hold their breath for more than 19 seconds.

Thus, stimulation of the left amygdala at George. K. cause respiratory failure without any accompanying unpleasant sensations. Surprisingly, during the attack he was able to take a breath if he wanted to say something.

Neurosurgeons had intended to conduct a study with three patients. They needed to understand whether there was the same effect that John. K., among others. Like George. K. D. suffered from refractory epilepsy, i.e., epilepsy that is resistant to medical treatment. In his case, stimulation of the amygdala (this time right) immediately resulted in respiratory arrest for 20-30 seconds of stimulation. Like George. K., he was relaxed, looking around and out the window like nothing happened. Respiratory pause is not reflected on his face. Signs of shortness of breath is also observed.

As for the third patient, the neurosurgeons stimulated in the left temporal lobe to determine the most important language centres, which should not be affected during the operation to remove the tumor. In the case of bilateral stimulation of the amygdaloid bodies has been the appropriate time to stop breathing.

Overall, the study suggests that electrical stimulation of the amygdala cause respiratory failure, regardless of the epileptic patient or not, and what affect this area an epileptic seizure can lead to the same consequences. The fact that the respiratory arrest did not cause any discomfort, indicates that stimulation of the amygdala suppresses areas of the brain responsible for the perception of breath and difficulties with him.

In practical terms, this means that breathing can stop when it reaches the seizure of the amygdala, without awareness of this fact by the man himself.

The sudden death syndrome in epilepsy

In addition, these observations can be extremely useful for understanding the so-called Syndrome of sudden death in epilepsy (SUSEP). He is one of the main causes of death in an epileptic fit. It concerns mainly young people who have medically uncontrolled epilepsy. SUSEP, the main factor of mortality among people with refractory epilepsy: 10% to 50% of all cases.

We do not know the mechanisms of SSAP, but they, apparently, are connected with coming during or after a bout of respiratory distress. The risk of SWCAP increases at night seizures, as well as in the presence of tonic-clonic seizures (the person loses consciousness and falls, then his muscles begin to reduce severe cramps). Although SSAP covers only a minority of people suffering from epilepsy, its frequency is 1 in 1000, i.e. 500 cases per year in France among the half of patients.

Feature of SSAP is that it refers to patients aged from 20 to 40 years and comes unexpectedly, for both the patient and his family, who for years used to frequent seizures and was not informed by the doctors about the risk of SUSEP.

These observations are shared by American neurosurgeons and neurologists in July 2015 in The Journal of Neuroscience, apparently, indicate that approaching the almond-shaped body having an epileptic seizure can cause sudden death, especially if the patient is unconscious on the bed and buried her face in the mattress.

The question is: these study results applicable to a large number of patients with epilepsy? Although SSAP can be the result of different processes, eyewitness observations and video recording in hospitals all point to respiratory disorders in the fateful moment. As noted by George Richerson (George Richerson), Brian Dlouhy (Brian Dlouhy) and their colleagues from the University of Iowa, identification of areas of the brain, which can lead to stop breathing, will find patients with risk of SSAP and to take preventive measures.

This is an amazing observation stood in a special light after the publication of the same group of specialists describe the tragic event in the February issue of Frontiers of Neurology.

We are talking about the death of girls aged 2 years and 9 months, who was suffering from febrile convulsions (this frequent pathology is generally considered non-hazardous). Epilepsy in a child was not.

Febrile seizures occur most often in children aged 6 months to 6 years. In particular we are talking about 2-5% of children under 5 years. In such circumstances, the physician needs to differentiate febrile convulsions from seizures that speak about infections of the Central nervous system, or resulted from the heat of suffering from epilepsy child.

Approximately a quarter of cases the family has a history of febrile seizures. So, the child’s mother was in childhood seizures, which led to requiring intensive care and long hospitalizations respiratory failure.

The girl has already been observed febrile convulsions with apnea and cyanosis (bluish skin) the year before. On the day of death she again began to convulse, and she was sent to the emergency room. Neurological analysis did not reveal any anomalies. Body temperature was 38,2 °C. Upon returning home, the parents put her to bed between mother and sister. Some time later, the father found her unconscious. She had no pulse and she wasn’t breathing.

The girl lay face down between her sister’s shoulder and the pillow. This position may lead to shortness of breath observed in some fatal cases of epilepsy. The girl’s mother, a nurse anesthetist tried to resuscitate her. When viewed in half an hour she had identified restoration of blood circulation, but it was too late. The brain showed the strongest bilateral edema due to prolonged lack of blood supply. Two days later, doctors pronounced him brain dead. Parents gave consent for removal of organs and autopsy.