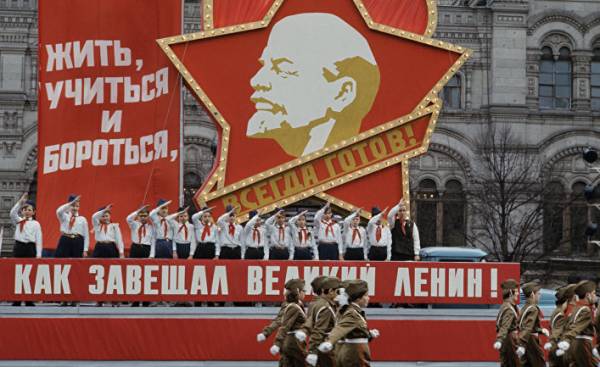 London. — What were you thinking Vladimir Ilyich Lenin during the long trip to Finland station in Petrograd in 1917?

Like everyone else, he was struck by the speed with which won the February revolution. During a trip to Europe from Zurich to Russia courtesy of the German Kaiser sealed train he must have thought that this opportunity should not be missed.

That weak liberal party became the new government, and placed in a dominant position, there was nothing unexpected. It disturbed him more. He had received reports that the Bolsheviks are showing insecurity, not knowing what to do next. They, like almost all leftists, hands and feet tied to the theory of Marxist Orthodoxy which says that at this stage the Russian revolution can only be bourgeois-democratic. Socialism is possible only in countries with advanced economies, such as Germany, France and even the United States, but not in the Russian peasant. (Leon Trotsky, with his group of intellectuals was one of the few who disagreed with this view.)

Because the course of the revolution was predetermined in advance, the socialists could only offer their support to the Interim government, which conducted the first phase of revolution and created a full-fledged capitalist society. And only after the formation of such a society they could start campaigning for more radical revolution.

This combination of dogmatism and passivity angered Lenin. The February upheaval forced him to rethink old dogmas. Now he believed that to move forward required a socialist revolution. Any other solution is not and can not be. The tsarist government want to destroy entirely. So he said, leaving the train in Petrograd: there can be no compromise with the government, which continues the war and with the parties supporting such a government.

The epitome of his tactical thinking was the Bolshevik slogan “peace for the peoples, land to the peasants, bread to the hungry”. And that before the revolution, it is now argued that the international capitalist chain breaks at its weakest link. If you enlist the support of the Russian workers and peasants, and create a new socialist state, this will create the conditions for revolt in Germany and in other countries. Without this, said Lenin, it would be difficult to build a serious form of socialism.

His new approach he outlined in the April theses, but he had to fight hard to convince the Bolshevik party. Someone condemned Lenin for the fact that he turned from a recognized Marxist doctrine, but in this case he was quoting Mephistopheles from Goethe’s “Faust”: “dry, my friend, theory is everywhere, but the life tree magnificently turns green”. One of his first supporters was the feminist Alexandra Kollontai. She also rejected the compromise, believing them to be impossible.

The period from February to October was probably the most open in the history of Russia. Lenin bowed to his side of the Bolshevik party, together with Trotsky and began to prepare a new revolution. The provisional government of Alexander Kerensky refused to get out of the war. The Bolshevik agitators in the army at the front strongly criticized him for his hesitation and indecision. Then came the rebellions and mass desertion.

In terms of composition of workers ‘and soldiers’ Councils began to understand the significance of Lenin’s strategy. The Bolsheviks received a majority in the Petrograd and Moscow Soviets, and the party quickly began to increase their ranks and achieve success in other places. Such a merger Leninist political ideas and the growing class consciousness of the workers has become the formula of the October events.

The October revolution was neither a conspiracy, nor even a coup. Perhaps, it was the most public and openly planned uprising in history. The two oldest of comrade Lenin on the Central Committee of the party opposed to immediate revolution, and had published the date of this event. Of course, the final details of no advance is not advertised, however, the seizure of power was swift, and violence was kept to a minimum.

Everything changed with the beginning of the Civil war in which the enemies of the nascent Soviet state actively supported the former Western allies of the king. The result was chaos, and killed millions of people, but in the end the Bolsheviks won. However for this they paid a terrible political and moral cost, including the actual disappearance of the working class that made the revolution.

Thus, after the October revolution of 1917 had to choose not between Lenin and liberal democracy. The choice had to do during the brutal armed struggle between the red army and the White army. The latter was headed by the king’s generals made no secret of the fact that if they win all the Bolsheviks and the Jews will be destroyed. As a result of the pogroms of white disappeared entire Jewish villages. Most Russian Jews resisted joining either the Red army or in partisan units. We should not forget that a few decades later it was the Red army created during the Civil war Trotsky, Mikhail Tukhachevsky and Frunze, Mikhail (the first two were later killed by Stalin), broke the military power of the Third Reich during the epic battles at Kursk and Stalingrad. By the time since the death of Lenin had passed almost two decades.

The last two years before his death in 1924, Lenin was weakened apoplectical States shock and paralysis, and he had time for reflection on the achievements Oktabrskoe revolution. He was not satisfied. Lenin saw that Bolshevism had contracted the habits and methods of work of the tsarist government, which had not been destroyed. He realized that chauvinism gained strength, and it must be eradicated. After huge losses in the Civil war, the level of party culture was regrettable.

“Business with the state apparatus we have sad, not to say disgusting — he wrote in the newspaper “Pravda”. — The most harmful thing would be to rely on the fact that we even know anything”.

“No, such a device and even elements, we are ridiculously small. And we must remember that to create it is not necessary to invest time and you have to spend many, many, many years,” he made his conclusion. Lenin believed that the revolution must recognize their mistakes and be updated, otherwise it will fail. However, after the death of the leader, his lessons were not heeded. His work has been ignored or deliberately distorted. Later in the Soviet Union was no longer leader with Lenin’s foresight.

“His mind was a wonderful instrument, wrote Winston Churchill, who cannot be called a fan of Bolshevism. — Insight of his mind was made to embrace the whole world, its history, its sorrows, stupidity, shame, and, primarily, the injustice. His intelligence was vast and in some phases superb.”

Neither his successor from among the reformers (nor Nikita Khrushchev in the 1950-ies and 1960-ies, neither Mikhail Gorbachev in the 1980s) did not have sufficient abilities to transform the country. The collapse of the Soviet Union due to the degradation of its political culture, and sometimes ridiculous inferiority of the bureaucratic elite, and equally economic stagnation and resource dependence, which arose in the 1970-ies. Obsessed with the desire to catch up technically United States of America, the Soviet leaders tore the ground out under your feet. In the final, and very sad Chapter of the revolution, many party officials became millionaires and oligarchs, what Trotsky wrote in 1936 while in exile.

“Politics is the concentrated expression of economy”, — said Lenin once. When capitalism stumbles, politicians and their backers among the oligarchs faced with the fact that voters in droves are leaving their party ranks. The shift to the right in Western politics was the rebellion against the neo-liberal coalitions that ruled after the collapse of the Soviet Union. But today, politicians can no longer blame the socialism, as they did before — because this form of socialism does not exist.

In the national-conservative Russia under President Vladimir Putin in this year celebrating the anniversaries of the February and October revolutions. “These festivals in our calendar,” said last year Putin one of my friend journalist from India.

“After their death, — Lenin wrote about revolutionary — attempt to turn them into harmless icons, so to speak, to canonize them, to offer the famous the glory of their name for the ‘consolation’ of the oppressed classes and for duping them, emasculating the content of the revolutionary teaching, blunting its revolutionary edge, vulgarizing it.” After the death of Lenin’s body mummified in spite of the protests of his widow and sisters, put on public display and were treated to the leader as to the Byzantine Saint. He predicted his own fate.

This is an essay from the “Red age” (Red Century), which is dedicated to the legacy and history of communism for 100 years after the revolution in Russia.