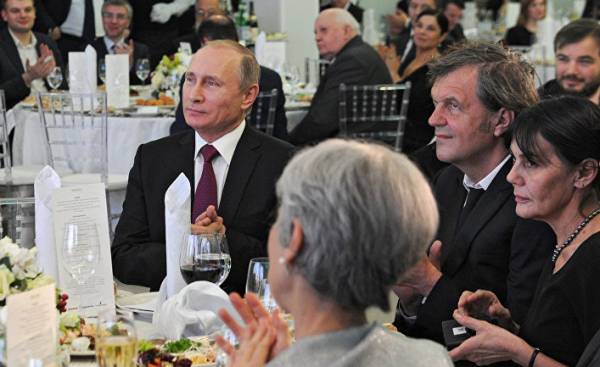 A Serbian film Director, musician and activist Emir Kusturica gave an interview to an Internet TV channel DVTV. In it he described why support for Russian President Vladimir Putin. Russia Kusturica called one of the small countries in the world, although in area it is the largest on the planet. He sharply criticized the United States, condemned the phenomenon of globalization and strongly supported the refugees. “I am absolutely on the side of the migrants,” said the filmmaker. It went from him and the leader who was interviewed, Emma Smetana.

Early on, Kusturica said: the information that he is persona non grata in the European kinosita because of the support of Russian President Vladimir Putin, how about wrote the British newspaper The Guardian, is not true. He Kusturica allegedly do not feel. But even if that were true, he didn’t care. He made the movie not for Putin, not against him. However, Emir Kusturica said that in 1999 Americans bombed his country, Serbia has suffered, and the Director does not forget.

“It’s a reaction to the war in which our country suffered a lot, when in 1999 the Americans and their allies bombed Serbia. They have caused damage have used cluster bombs, because of which today many of my fellow cancer,” — said Kusturica.

The example of Serbia, according to him, again it became clear that “the West was very combative towards the East, not Vice versa. The Nazis also wanted to invade Russia, and their main goal was to hike from West to East.” The Americans, according to Kusturica, has the same effect. Being a man of art, the Director feels the need to accentuate this and to warn. And although, according to Kusturica, the recent US presidential elections showed that the influence of artists on society has been significantly weakened, it does not negate the fact that they have to take an active civil position.

We need someone who will defend the East from the West, says the Director

“I’m not for Putin, but I am for balance in a world in which one player cannot do what you will, — said Kusturica. — I am sure that small countries, such as Syria or Russia, which have energy resources, have the right to retain them for themselves.”

Somehow the Director even said that would give your yard for missiles Putin. When presenter Emma Smetana reminded Kusturica about this, he laughed heartily. “It was just a joke. I can’t believe you took it so seriously,” he said. But then with a serious face he added that it is necessary to restore the balance in the world. According to the Director, it is necessary that there be strong policies that would protect the East from the West. And such a policy Kusturica sees Putin.

In addition, the Serbian Director believes that people should be protected from globalization, because supposedly that’s what we can “thank” for instability in the modern world. “Never before in the history of the world was not so unstable as it is today — warned Kusturica. — I don’t think you understand my feelings, because you live in a peaceful country that successfully compromises, and it is good to live, although the rest of the world will not tell you.”

“One of the reasons is cruel globalization, which is carried out in some funds, first of all, Mr. Soros. He continues what the CIA was doing in Latin America in 70-e years of the last century, namely: the creation of fascist regimes and harm to Latin America,” said Kusturica in an interview.

Today, according to him, the same thing happens in the Balkans and the middle East. There free state attacked because of their loose policy. But when Emma Smetana reminded the Director about the Russian occupation of Crimea, he immediately said that the Crimea — is another matter entirely. Crimea — is Russia. “I ask you a question: why don’t you ask me about Kosovo?” — he said Kusturica. “I wanted to start a conversation about Kosovo, a little later,” — said TV presenter.

However, it again returned to the Crimea. Soviet leader Nikita Khrushchev gave the Peninsula to Ukraine, and, as noted Kusturica, modern Russia is not the Soviet Union, therefore, refer to Khrushchev’s impossible. As for Kosovo, on the contrary, it was always part of Serbia, and it was forcibly torn away “by a” violation of international law. “So that international law is much more and much earlier has been violated by the United States, not Russia”, — explained the Director.

“International law was replaced by the humanitarian right, which allows you to bombard other countries and spreading democracy with bombs”, — he added.

I am fully on the side of migrants

The famous Director has not paid attention to the immigration crisis. Kusturica recalled that in 90-e years of the last century migrants were primarily Serbs who were driven out of home by the war, so today he supports migrants.

“I am fully on the side of migrants. I am always ready to exchange the quiet life that bring the migrants. They’re the new blood. But I am against the fact that all migrants are sent to West and Central Europe and not go to Saudi Arabia or other countries, such as Bahrain or Qatar,” said Emir Kusturica.

Today, according to him, Europe is paying for what he did ex-us President Barack Obama. “Barack Obama, Nobel peace prize laureate, gave the order for the murder of 27 thousand people using drones. He started a war in Syria,” — says Serbian Director.

Putin did not create terrorists that the Americans did

In an interview with Emir Kusturica insisted that Americans are more dangerous to the world than Russian, because Russian is interested in stability, and the Americans wreaked havoc, including with terrorists, which the US arm. Just look at the example of Libya.

However, the TV presenter Smetana returned to said and noted that earlier the Soviet Union also took a very controversial decision. Kusturica was very annoyed. “From the very beginning of our conversation you make the same mistake: you replace Russia as the Soviet Union. But Russia is not the Soviet Union,” retorted Kusturica. He also stressed that is just an artist, and in politics he is an Amateur, so he really did not like that the lead plays with words and tries to attack him. Supposedly so he thought. Kusturica warned a leadership that will cease the interview if she would continue in the same spirit.

Emma smetana retorted that only takes an interview with an interesting guest and wants to let the audience know his opinion about politics. “And I feel like I was talking to someone from the American state Department, not a citizen of the Czech Republic,” hot Kusturica. It seemed to him that the lead behaves with him unfriendly.

Interview with the Director ended with the words, that he does not feel himself a friend of Russia. He is the friend of a world in which the leader was about two or three powers, able to compromise with each other. Then the world would be a much more stable and not would have been in chaos which reigns today.