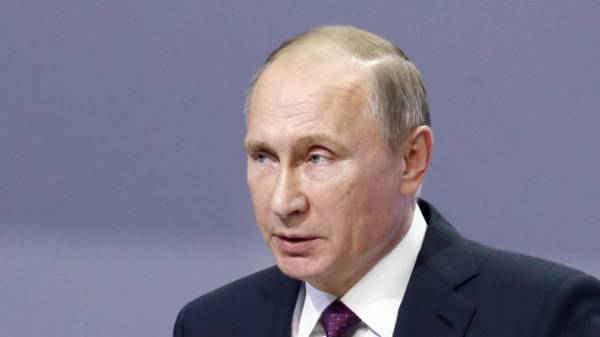 In Moscow started talking about the upcoming presidential elections in Russia, which should take place on 11 March 2018. Today the key question: will the Kremlin for pre-election campaign, which may revive protests in the country. According to local media, the election could become a referendum on confidence in the national leader — Vladimir Putin. This was supposedly discussed at the recent closed meeting of the head of the presidential administration of Russia Sergey Kirienko with the experts. “We expect the participation of Putin in the election of 2018 leaves no doubt that his victory is predetermined, and elections will be held on the model of a referendum on confidence in the national leader,” writes the newspaper “Vedomosti”.

At the moment, no one said the refusal from the standard of the presidential elections, but none of the Russian politicians announced his candidacy. For example, yesterday the leader “Fair Russia” Sergei Mironov said that the party will decide on its candidate for the post of President of the Russian Federation about a month, at the moment there is no decision. On Tuesday failed to clarify the situation the press-Secretary of Russian leader Dmitry Peskov.

“President Putin himself has repeatedly said that it was premature to make any electoral statements. He’s no announcement has been done so far, while there is still sufficient time before the start of the electoral campaign, while the agenda of other”, — said Peskov on the request of journalists to comment on media reports about possible extension of the head of state for a new term.

While it is possible to observe the preparation of public opinion to the realization that the standard elections have no meaning when the high rating of Putin, which gives him a claim to honest surveys Russian sociological institutions. For example, according to the findings of VTSIOM, as of February 1, the President approved, about 85% of Russians.

“No doubt, Putin will be selected or not. The challenge is that people do not have the feeling that to go to the polls there is no need, if the President so get out,” lead “Vedomosti” the words of your source in the Kremlin.

“Now the Kremlin has three main objectives: to improve Putin’s rating to record levels, to make elections more transparent and clean, as well as to ensure that Putin has not only received a record number of votes, but the highest turnout of voters,” — said the TV channel “Rain”.

But in this election, unlike all previous presidential campaigns in Russia, is one important caveat — the vote in the annexed Crimea. “BP has recognized as invalid the elections of the state Duma of the seventh convocation on the grounds that a vote was taken and occupied Crimea. The Western world has not recognized the elected deputies there. How will they respond to Putin’s election, including in the Crimea, it is difficult to predict. But Ukraine in any case will have to beat at one point not to recognize the elections of the President of the Russian Federation as a whole”, — said the “Today” political analyst Taras Berezovets.

Bad example. The referendum option is very often used by dictators of the former Soviet republics to secure a permanent stay in power without rewriting the Constitution. For example, in 1995, the result of the referendum, presidential powers of Nursultan Nazarbayev were extended until 2000, and then he was four times re-elected in the elections. The ex-President of Uzbekistan Islam Karimov has twice extended his powers through a referendum: in 1995 and 2002. As the founder of this phenomenon in the former Soviet Union can be called Turkmenistan’s President Saparmurat Niyazov, who in January 1994, held a referendum and later declared himself President for life.

After confirmation of his powers in 2018, by referendum, Putin will remain the option of reelection for a second term in 2024.