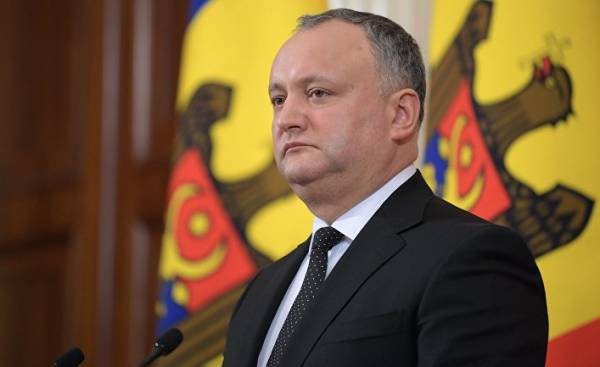 The President of the Republic of Moldova Igor Dodon accused the European Union there are serious shortcomings in the process of monitoring a multimillion-dollar financial assistance for his country. “From 2007 to 2015 the European Union has given Moldova more than 782 million euros. At least half of the money disappeared in dark channels. The corrupt members of various supposedly Pro-European governments in my country stole the money. The leader of the socialists I have spoken several times about this to the representatives of the Brussels, but to the responsible EU commissioners does not care about it,” stated the newspaper Die Welt.

Millions payout West had a much stronger tie with the conditions, — the President continued. Billions of dollars in bilateral loans were provided “a significant part” in the dark channels. “Now you must do everything that future financial assistance from the EU did the citizens of the Republic of Moldova and used for reform,” said Igor Dodon.

The level of approval of the EU dropped to 38 percent

42-year-old politician on a post of the President of the Republic of Moldova from December 2016. He previously over five years was Chairman of socialists (psrm). Misunderstanding corruption in his country has especially in Germany, — said Igor Dodon. “As citizens of Germany who live in simple houses, should understand that their taxes flowed to the Republic of Moldova, where corrupt politicians used them to buy castles in Germany?”

Dodon called specific result criticized his policy. Despite the financial help of Brussels, the level of approval of the EU in Moldova decreased to 38 percent — in 2007 it was 70 percent. “It happened because the money never reached the people. Our citizens see how the various Pro-Western government was involved in corruption scandals”. The only victory for the citizens of Moldova became a visa-free regime, which is April 2014 allows them to stay 90 days in the EU.

The Association agreement between the EU and Moldova, which entered into force in July 2016, Dodon criticized. The core of the agreement is the establishment of a comprehensive free trade zone. He wants to renegotiate the agreement with the participation of Russia. In addition, the President supports the accession to the Eurasian Union dominated by Moscow. “I personally believe that we will win more if we have a closer relationship with the Eurasian Union. For Moldova it is more profitable to join the Eurasian Union,” he said.

But as President he can’t make such decisions. This can be solved by referendum, or by decision of the Parliament after the elections in 2018. “I propose that at this stage we have signed a Memorandum of cooperation with the Eurasian Union,” said Dodon. One of the goals of cooperation with the EU and with the Eurasian Union, is to liberate the sales of vegetables and fruits from the rules of free trade with the West. “Then our farmers could export these goods to Russia.”

If all goes according to plan Dodon, Moldova under his presidency, will once again begin to turn to Moscow. The so-called Eastern partnership of the EU, which since 2009 has to bring to the EU as Ukraine and Georgia, “is no longer working so well.” “We want to cooperate with the West and the East. Over the past seven years we have focussed only in the West. It was a big mistake. We need a strategic partnership with Russia “, — said Igor Dodon.