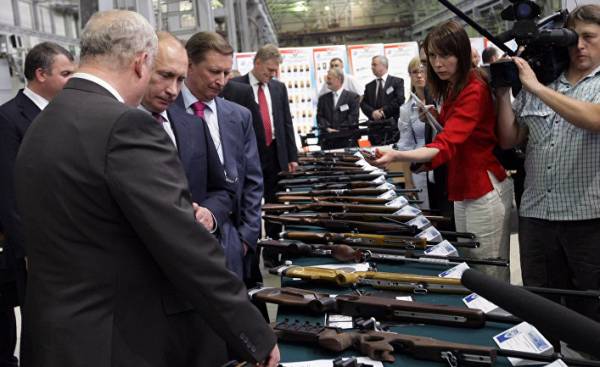 Udmurtia is headed by co-Chairman of the Central headquarters of the presidential “popular front” Alexander Brechalov. He actively criticized other governors, but the experience of the civil service has not. The previous head of Udmurtia have arrested on suspicion in receiving a bribe.

The detention of the head of Udmurtia Alexander Soloviev — he was the fourth in the last two years, the current Governor, who left office in jail, is distinguished by the fact that this time the decision to dismiss the President is not pulled.

Arrested the head of Sakhalin Alexander Horoshavin — he was accused of receiving bribes, he remained Governor for another three weeks after his arrest. The Governor of the Komi Republic Vyacheslav Gaiser, who was detained on suspicion of organizing a criminal community, was looking for a replacement for almost two weeks. The detainee when receiving a labeled 100 thousand euros, the head of the Kirov region Nikita Belykh more than a month remained Governor while in jail.

A decree on dismissal of Solovyov “in connection with loss of trust” — the traditional for such cases, the wording appeared on the presidential website on Tuesday, April 4, at 13:15 Moscow time, after less than five hours after the first reports about the detention of the head of the Udmurt Republic. At 15:30 on the Kremlin website appeared a message on the appointment Brechalov acting head of the Republic.

Analyst Gregory Left notes that the issue of the resignation of Solovyov and his mate decided in advance. “Talked about this for a long time, and in the last week the rumors intensified”, he said. According to him, there remained only the question of whether will lead to Solovyov’s case.

On the evening of April 4, Basmanny court arrested Solovyov for two months.

Memorable than the arrested Governor

66-year-old Solovyov headed the region since February 2014. He succeeded as the head of Udmurtia Governor Alexander Volkov longevity. He led the Republic in 1993 as Chairman of the Council of Ministers, then from 1995 to 2000, he headed the state Council, in the period 2000-2011 was the President of the Republic, and from 2011 to 2014 — head it up.

Soloviev — a native of Udmurtia and worked all his life in the region. In 1999, he was four times elected a Deputy of the local Parliament — the state Council of the Udmurt Republic, and from 2007 to 2013 was its Chairman. In April 2013, it has delegated to the Federation Council from the Parliament of the Republic, but he has worked less than a year.

However, the Secretary of the General Council “United Russia” Sergei Neverov said that in the selection of Soloviev, the President proceeded from the fact that he combines the qualities of a “responsible economic Manager and public policy”, and has the support of the citizens.

Solovyov in the elections in September 2014 was supported by 84.8% of voters. In the Duma elections in 2016 in Udmurtia, United Russia received 50.5% of votes — this is not the worst result, though less than the party won power in the whole country (54.2 per cent). In December rating of political survival rate of governors of the Fund “Petersburg politics” Solovyov received four points out of five — its strength, experts said, is that he avoided “the weakening of the management system in the Republic, the positions of which in the economy is improving due to the growing volume of defense orders.”

However, from the criminal case the head of the region is not saved. According to investigators, in the years 2014-2016 Solovyov received bribes amounting to 139 million rubles from representatives of organizations that build bridges over river Kama and river Buoy the city kambarki in Udmurtia.

Alleged that Solovyov was to provide an extraordinary and immediate payment of work performed from the Federal and regional budgets, and the allocation of licenses for geological study of subsoil and exploration and mining of sand and sand-gravel mixture. He was charged under part 6 of article 290 of the criminal code of Russian Federation — bribe reception in especially large size the official occupying public office (up to 15 years of imprisonment).

It is noteworthy that Solovyov myself dealt with roads: from 1987 he was head of Izhevsk road construction management “Udmurtenergo”. And from 1993 to 2003 Solovyov headed “Udmurtohota”.

According to Dobroselova, detention Solovyov showed that the system still operates selectively. “Obviously, someone Solovyov crossed the road, could not agree, could not convince,” — said the analyst.

“The situation is very unpleasant for him, for the Republic, and for those who knew him. For many years we worked together. What happened was a complete surprise, he said Solovyov, the former head of the Udmurt Republic, Senator of wolves. — To dismiss could offer. But he firmly sinned, and that those who are supposed to understand. Senior officials such sins must not allow that”. The head of the region, he said, “must not lose a nose for wrong doing”.

According to Volkov, in that moment, when he headed the Republic, perhaps he and his team “too, something had broken.” “Some decisions have to be made, not verifying the legal base,” he admitted, stressing that never put their interests above the interests of the Republic.

Brechalov became the third native of the popular front, received the chair of the head of the region.

In April 2014, the President appointed the head of the Executive Committee of the Federal headquarters of the “front” Andrey Bocharov, the head of the Volgograd region. Predecessor Bocharov Sergey Bozhenov noted in the region of scandals, in particular, in April 2012, he flew with the deputies of the regional Assembly in Italy on a private jet to (the official version) “to present the economic potential of the Volgograd region”. The visit coincided with the birthday of Bozhenova. In retirement, he quit two years later and a criminal case avoided.

The other comes from the “front”, the Deputy of the state Duma Alexander Bogomazov, in September 2014, has replaced on a post of the Governor of the Bryansk region Nicholas deneen. The latest to resign “in connection with loss of trust” was sent by the President. In may 2015 Denin was charged with abuse of power, and in November he received four years in prison.

According to United Russia Neverov, Brechalov have the experience and knowledge to restore the trust of the people of Udmurt Republic to power. “Given the wording with which the resignation was sent to the former head of Udmurtia, Alexander Brechalov have the hardest job,” said Neverov.

Brechalov called his appointment “a big responsibility and a new challenge”. Interestingly, Brechalov himself, working in the onf, criticized the heads of regions. So, in December 2013 on the forum of the popular front, he complained to Vladimir Putin on the administration of the Sakhalin region, laid in the budget of 680 million rubles for the “improving the image of the Governor.” Governor Khoroshavin a little more than a year was arrested. On the channel front appeared on YouTube minute cartoon in which a character similar to the prizes, reports to the character resembling the President. At the end of “the President” presses the button under the table, under the “Governor” unfolds the floor and he flies away.

“The job of Governor is not easy, and experience in the management of the region have no Brechalov,” said political analyst Rostislav Turovsky, agreeing that for people from the “front” it is a challenge.

43-year-old Brechalov never engaged in public administration. In 1991, he founded the company “Venice”, which was engaged in the manufacture of stun rods and trade. In the 90s he worked as a legal counsel in CJSC “TV-6 Moscow” and senior legal counsel to Alfa-Bank, and then in the 2000s, he became Director of the legal Department and Deputy Chairman of “Uniastrum Bank”. In 2002 Brechalov became the President of “Uniastrum Consulting”, which in 2006 was renamed into LLC “VBO KONSALT”. It Brechalov he headed until 2013.

Social activities he is actively engaged in December 2008, becoming Vice-President of the organization of small and medium business “OPORA Russia”. In 2012 he led the organization. In October 2013, he became co-Chairman of the Central headquarters of the onf. Since February 2014 Brechalov became part of the Public chamber, and in June became its Secretary.

In April 2015, the Pro-Kremlin Fund “Institute of socio-economic and political studies” put Brechalov in first place in the ranking of the most promising politicians. It was intended for the post of the speaker of the state Duma. But in the elections of 2016 Brechalov was not involved. After the first Deputy head of the presidential administration Vyacheslav Volodin has moved to the Duma, the media called Brechalov candidate for the vacant post of head of the political bloc in the Kremlin. But this work Brechalov not received.

“The political career — thing coming and going. It is obvious that in recent years Brechalov was not a good time” — said the analyst Gregory Left. He recalled that the new composition of the Public chamber Brechalov not included, and in June he had to vacate his post. According to him, “veteran” risked being in political oblivion: co-chair of the headquarters of the popular front — a status position, but not the most significant.

“Elections to the Duma soon now, changes in the administration of the President if it was planned, it is unlikely that it would consider changes in the government — not clear on which block to put it. Governor for Brechalov was the only chance to save themselves in the political magazine,” said the analyst.

The analyst Turovsky also emphasizes that Brechalov began to lose their positions.

“A politician who’s influential, but doesn’t fit the situation, often transferred to the post of head of the region”, — said the expert. In his opinion, it is soft, a compromise solution which allows Brechalov to pursue a career at the Federal level.

Turovsky believes that the region “veteran” will be hard — Udmurtiya are not accustomed to the governors-“the Vikings”, and Brechalov ties with the Republic. “The main part of the local elite will meet this appointment cautiously,” — said the expert. However, he does not exclude that Brechalov will be able to play the card of updates from authorities in Udmurtia, that there never was. The left believes that Brechalov has a chance to show themselves in the difficult region.

As told to BBC the Senator from Udmurtiya Alexander Volkov, Wednesday Brechalov will be in the region and will be presented as the new head of the presidential envoy in the Volga Federal district Mikhail Babich.