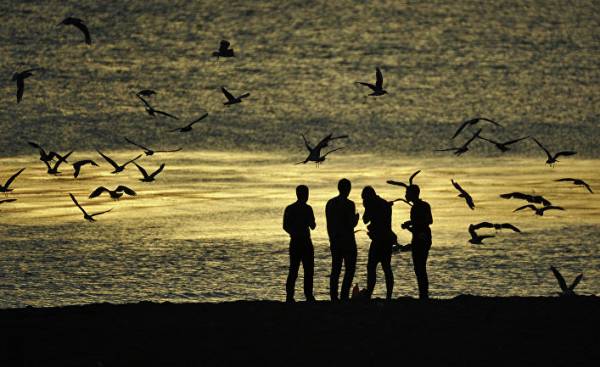 ARKHANGELSK IN the Arctic waiting in the wings not only huge opportunities but also the possibility of great disaster.
20-year-old Lena quick step is on the ice over the river Dvina in the White sea.

This temporary track is two kilometers on ice and snow — the best way to get to Arkhangelsk for several thousand people who live in the town of Kegostrov where a lot of old, crumbling houses.

“If you walk briskly, then I get it in less than 30 minutes,” says Lena, who is studying to be a geologist.

Lena and 2.6 million Russians make up 57% of the world population living near the Arctic circle or in it.

Infrastructure issues — are huge. And in the Arctic the Russians live seven years less than in other regions of the country.

But, like many Russian, Lena was convinced that her future lies with the North.

“My dream is to work as a geologist in the Arctic and to look for minerals. I know that a lot of opportunities,” she says.

Putin is investing in the Arctic, billions

The Arctic is warming twice as fast as in other regions of the globe. The ice is melting, and many fear a climate catastrophe.

However, there are great opportunities for oil, gas, other minerals, trade routes, agriculture and fisheries.

“We will invest in the Arctic, billions of rubles”, — said Russian President Vladimir Putin on Thursday, taking the 1,600 politicians, businessmen, scientists and diplomats at the summit in the city, calling themselves the “Arctic capital” of Russia.

Thanks to the summit meeting in Arkhangelsk Wednesday was also the first in three years, bilateral political meeting between Norway and Russia.

According to Deputy Prime Minister Dmitry Rogozin, the planned investment of Russia until 2030, approximately 5 billion rubles, will go on sale 150 major projects aimed at the development of the region.

China sent to a conference of influential Vice-Premier Wang Yang and a delegation of 70 people.

The Chinese are doing, particularly big bet on new ports, icebreaker and Railways in the North. Even countries like Switzerland and Singapore, saddled “Arctic wave”.

THE FACTS: INVESTMENT OF RUSSIA IN THE ARCTIC

Russia are immense ambition with the Arctic, which is portrayed as the future of the country.

According to Deputy Prime Minister Dmitry Rogozin, Russia plans in the Arctic, the implementation of 150 projects for a total amount of 5 trillion rubles (SIC — approx.ed.) for the period up to 2030:

48% of the projects concern the extraction of natural resources.

16% of projects connected with transport, while 7% will go to exploration.

The remaining funds will go to the development of industry, energy, fisheries, agriculture and telecommunications.

Only 2% will go to measures related to environmental protection.

While Russia is one of the eight countries bordering the Arctic, which has succeeded in the development of the region the most.

Almost 20% of Russia’s GDP is now created to the North of the Arctic circle at 66 degrees North latitude.

The Russian Ministry of natural resources says that nearly 60% of future oil and energy resources of Russia are concentrated in the Arctic. While only explored one tenth of Russia’s continental shelf and about half of the territory on land.

Americans feel that you lose the initiative, giving it to the Russians and the Chinese.

“The United States should strengthen its strategic involvement in the region, otherwise they run the risk that their interests will not be protected” — makes the us Council on foreign relations (Council of Foreign Relation) conclusion in a recent report.

Now the Russians are talking about the environment

Ice carpet over the Arctic in March was measured by the National data center of snow and ice they were of the record low figure at 14.4 million square kilometers.

During the winter, the Arctic has experienced three powerful heat wave.

As a result of natural climate change and climate change caused by human actions, compared to 2015 year disappeared 97 thousand square kilometers of ice.

“If we lose the Arctic, we will lose the world”, — said the President of Finland Sauli Niinistö.

“We have the technology. It is time something to do with it”, — he said.

One of the companies that pollute the environment more than all the world, — “Norilsk Nickel” which on new year’s eve promised to significantly reduce emissions.

“We are concerned about climate change,” said Putin, who on Wednesday went on the Franz Josef Land, to spend inspection: how is the cleaning the old debris remaining from the Soviet era.

In some places in the Russian Arctic focused giant landfills that year-on-year increase. This was one of the reasons that 2017 is declared in Russia as the “Year of environment”.

“We are pleased that Russia is active and assumes a leadership role,” — said the head of the climate programme of the UN Eric Solheim (Erik Solheim).

The richest people in Russia

Leonid Mikhelson, through his company “NOVATEK” have earned no gas unfathomable sum of 18.1 billion dollars.

Now he builds one of the world’s largest production facilities on the Yamal Peninsula.

“When we arrived, there was no infrastructure. Now there’s 30 thousand jobs, airport, schools, air port and hospitals,” — said Mikhelson in Arkhangelsk.

“There will be extracted about the same as around Qatar,” proudly said Michelson.

But the problem is incredibly rich Michelson and Russia in General — that money is sorely lacking.

Fantastic figure, which says the Kremlin is “five billion” to a large extent has to happen through various firms and oligarchs.

Now the Russians are trying to attract investors, while the Kremlin hopes that Western sanctions will soon be lifted.

How the dreams of the Russians and the student-geologist of the Lena river on the Arctic are largely dependent on oil prices.

Today’s price is 51 dollars per barrel, is so low that it is now absolutely unprofitable to produce in large part the future of the oil and resources of Russia.

“According to our forecasts, the cost of oil extraction in the Arctic are about 70 to 100 dollars”, — said Russian energy Minister Alexander Novak.

Arkhangelsk oblast is located in the North-West Russia, and extends 587 thousand square kilometers from Kirov to Karelia in the West to the northernmost territory of Russia — Franz-Joseph.

The city of Arkhangelsk, where 348.000 is the administrative center of the region.

The Vikings called the land of Bjarmaland (Bjarmaland), Norwegian and Russian princes fought for control until the 15th century.

Arkhangelsk is situated on both sides of the river Dvina in the White sea.

Before Peter the Great won territory from Baltic sea from the Swedes and founded Saint Petersburg in 1703, the city was the main port of Russia.

At the end of the 19th century between Moscow and Arkhangelsk railroad, the town began to play an important role in the export of Russian timber.

Until recently the port was closed five months of the year because of ice, but now operates year-round thanks to icebreakers.

The main industries of the region are connected with oil, wood, titanium, gold and basalt. Manufacture of paper and pulp is about half of industrial production in the region.

“Look how we live”

Russian better than most others know how to survive in the harsh climate.

On the river Dvina in Arkhangelsk there are more people, they go on the ice, although the weather is windy, the temperature is below 10 degrees below zero.

A separate patrol of three guys from the port service ensures that people do not fall in a hole or have not lost the ability to navigate in bad weather.

In the middle of the river, someone had built a wooden footbridge over the great ice made by an icebreaker.

“Of course, it’s cold. But I save at least an hour when you go across the river and not ride on the bus,” she says and runs next to his grandmother.

Behind her in a more relaxed pace should 66-year-old pensioner Viktor Yanukovych.

“In our country, large natural resources, oil and gas. But look how we live”, — said Victor to the correspondent of Aftenposten. He invites him to follow your example and go on vacation to the Crimea.

“Maybe something really gets better. But just look at this wooden walkways. And here after all, several thousand people go every day. And so it was — as I live here. Nobody does anything,” he says.

“All my life I worked as a driver. And I will only benefit the fresh air and the walk. So I’m healthy,” a smiling Victor and wanders further along the ice.