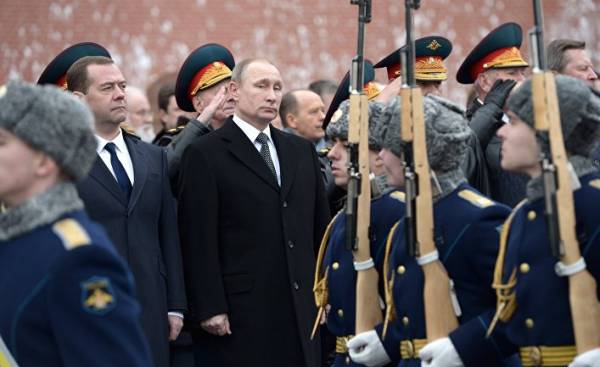 “If we used traditional criteria for understanding leaders seeking to ensure the protection of borders and national prosperity, then Putin could be called an outstanding statesman of our time.

“Who can compete on the world stage?”

What allows you to put Putin above all other leaders of the XXI century?

“When Putin came to power in the winter of 1999-2000, his country was vulnerable. She was bankrupt. It tore to pieces a new kleptocratic elite who were in cahoots with old rivals Imperial Russia to the Americans. Putin changed that.

“In the first decade of this century, he did what he did Kemal Ataturk in Turkey in the 1920-ies. Of ruined the Empire he had created a national state, but also ensured its stability and defined its purpose. He disciplined plutocrats in the country. He restored its military power. Using increasingly harsh rhetoric, he refused the subordinate role of Russia in America managed the world system, which was prepared for her foreign politicians and business leaders. His voters believe that he saved his country.”

The approval rating of Putin after 17 years of being in power exceeds the popularity of any rival among Western leaders. His impressive actions to make Russia great again, explain the respectful attitude of citizens of Russia and representatives of Russian Diaspora abroad. But what can explain his popularity in the West, despite the press, which is as hostile to him as the President Trump?

Answer: Putin opposes Western progressive concepts as to what should be the future of humanity. Many years ago he United with the traditionalists, nationalists, and populists in the West and opposed, that they began to hate their own decadent civilization.

What caused them disgust, disgusted, and Putin. He is a Russian patriot, patriot “in the name of God and country.” He rejects the New world order established the United States after the cold war. Russia first of all, Putin said. Defying the Americans, he appeals to the millions of Europeans who want to restore their national identity and take away their loss of sovereignty to a supranational European Union. Putin also opposes progressive moral relativism of the Western elites, whose representatives cut their Christian roots, referring to the secularism and hedonism.

The American establishment hates Putin because, according to his representatives, he is the aggressor, the tyrant, “killer”. He invaded the Ukraine and occupied it. His old comrades from the KGB kill journalists, defectors and dissidents.

However, the policy as under the tsars and the Commissars were often in Russia a bloody sport. And what Putin has done to his internal enemies that could be compared with the actions of our Arab ally Abdul Fattah Al-Sisi against the “Muslim Brothers” (organization banned in Russia — approx. ed.), the power that he overthrew in a military coup in Egypt?

Maybe someone thinks that the President XI Jinping addressed with mass demonstrations against his regime in Tiananmen square more gently than did President Putin last week in Moscow?

Much of the hostility to Putin is because he not only challenges the West, protecting Russia’s interests, but also achieves success, while remaining unpunished and unrepentant.

It is not only popular in his own country he has admirers in those States where the political establishment treats him very hostile.

According to a December survey, 37% of Republicans have a favorable opinion of the Russian leader, and only 17% positively assess President Barack Obama.

But there is another reason for approving attitude towards Putin. Millions of ethno-nationalists who would like to achieve out of their countries from the European Union, see him as their ally. And if Putin openly welcomed many of these movements, the representatives of the American elite do not take even a neutral stance towards them.

Putin is better understood in the new century than his rivals. In the XX century the world was divided into Communist East and democratic West, while the XXI century determine other battles.

New dividing lines are between social conservatism and pandering to their whims secularism, between tribalism and transnationalism, between the national government and the New world order.

With regard to new dividing lines, Putin is on the side of the rebels. Those people who stand for a Europe of Nations of de Gaulle, not the concept of One Europe, in the direction which moves the European Union see Putin as an ally.

And there is the old question: who owns the future?

In new battles of the new century, it cannot be excluded that Russia — as America during cold war could be on the winning side. Separatist parties across Europe are already looking to Moscow, not across the Atlantic.

“Putin has become a symbol of national sovereignty in the struggle against globalism — notes Kelduell. — It turned out that this was a major battle of our time. As shown by our last election, it is confirmed even here.”