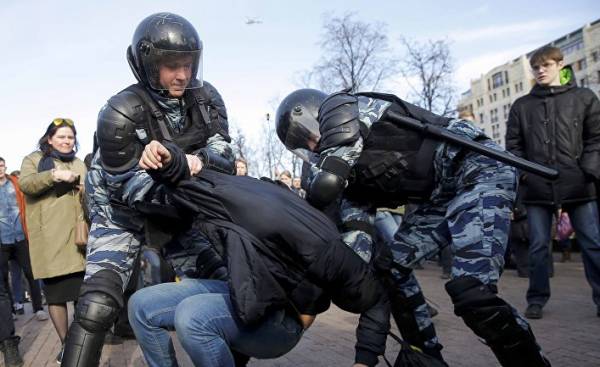 In Russia in recent street demonstrations were held five years ago. In that moment, when Putin for the third time returned to the post of President which he has held since 2000, rockiroads with Medvedev, riot militia dispersed on the streets of Moscow demonstrators protesting against this suffocating regime, “Putin to the grave”.

Latest footage from the ceremony “the return of Putin to the presidency” in 2012, still remain in my memory. In one part of the screen — the triumph in the Kremlin halls with gold, the other with the demonstrators, which the police is dragging on the road. From that day on from Putin’s opponents, there was nothing. The opposition, which could not breathe, under the “iron fist” of the king seemed to “surrender”. So the demonstrations that last Sunday suddenly broke out across Russia, has caused great surprise and interest.

From Moscow to St. Petersburg on the shores of the Baltic sea from Makhachkala in Dagestan to Yekaterinburg and Vladivostok near the border with North Korea — tens of thousands of demonstrators across the country, crossing the “wall of fear” came out again in the square.

This time the sight was “corruption” which became systemic in nature, and “second man of the regime,” Prime Minister Medvedev.

Instead of demonstrations — “cow”

The news from whatever side you look, very unpleasant. And what do we see?

Russian media, timid to spoil the mood of the king, as we have in the course of Gezi (the protests from environmentalists in Turkey in may-June 2013, which began in Gezi Park — approx. ed.), turned into “three monkeys”. Reading the article in the Moscow Times entitled “don’t hear evil, see evil, say evil!”, I didn’t think it was alien.

The article begins with the words: “this Sunday, Russia became the scene of mass demonstrations. But you might not know about it, if you were watching state media!”.

It is further observed: “Moscow city Center was cordoned off by thousands of security personnel. Roads and squares of the capital were filled with people, who chanted slogans and were bundled into police vans. In Moscow detained a thousand people. But in the Russian state-controlled media have not gone about this day of civil strife. In TV programs on current topics was not a word about it. When the police dragged hundreds of demonstrators, one of the first news on the pages of the mainstream media, called: “US freedom-loving cow went from the police”. In the state media, no one talked about why hosted protests (against corruption!). The two largest Russian TV channel “First” and “Russia” reported on the snowfall in Moscow, while ignoring the elephant in the room…”

As it is familiar to us, isn’t it?

Unlike the opposition leader

In the intense atmosphere of fear and censorship, the people take to the streets?

There are two Russian. One of the old Russia, which, as we worship the “force”, “strong”, “powerful”… the Second is young, the other Russia, which is old in Internet and “new public opinion”… For the new generations exhausting and depressing prospect, “Putin said to the grave” outweighs the fear.

The factor that inspires the younger generations and connects them together is the presence of opposition leader named Alexei Navalny.

If not Navalny, because he mobilized the opposition (on the Internet), the demonstration would not have such a resonance and would not have produced such a global sensation.

In contrast to the formal, ostentatious opposition in Parliament Navalny exposes the existing problems with the help of NGOs, systematically tracking corruption. To this end, he uses the Internet and Youtube. It is argued that, for example, in Youtube of Sunday’s demonstration was seen 13 million Russians, and the interest in them is fueled documentary on corruption, prepared by the Bulk.

The creation of this film NCO Bulk even used image secret possessions Medvedev, who were photographed from the air using drones. Their accusations the opposition was supported not only slogans, but also the documentary evidence.

The fact that the opposition leader with legal education focused on corruption — a topic that is not “polarizing” society, and causes a uniform reaction of the Russians, left and right also becomes an important factor in the revival of the opposition.

Finally, Navalny is not afraid of prison. The Russian opposition, which on Sunday was detained again, will be the rival of Putin in the presidential election next year!