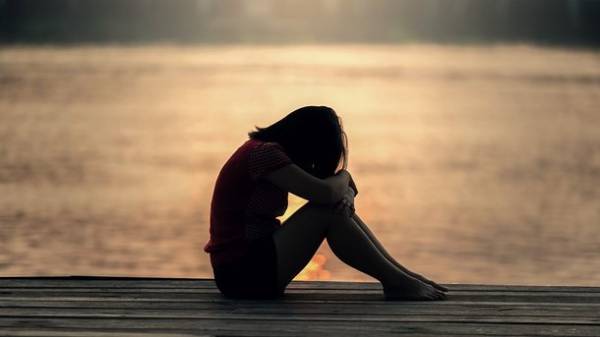 In Chernihiv teenage girls brutally beat the girl and filmed it on video. When the recording of the fight appeared on the Internet, she immediately outraged users of social networks. Now one of the victims is in the hospital, and her obedecem face criminal liability.

The conflict took place on 2 April in the centre of the city, tells “Today” the mother of the victim Polina Valentina Maloshtan. According to the woman, her 14-year-old daughter along with her friend Julia was walking down the street when the girls ran up the other girls. Aggressive teenagers asked Julia to give them a mobile phone. Pauline tried to stand up for a friend. According to the child, this was the reason for the beating.

What happened next, captured on two videos, which instantly sold out online.

On the first record three girls in front of a crowd of peers beat 14-year-old Pauline. The video lasts five minutes. All this time the attackers beat the girl with fists to the head and body, slap on the face, pulled by the hair, knocked a victim to the ground and kicked. For a girl no one stands up. Only in the end of the video a few guys run in and separate the aggressive adolescents.

In the second video, beat girlfriend, Polina – 14-year-old Julia. Some girls, like teenagers with a first video, was surrounded by his peers. The victim pushed, also beat his fists on the body and face. Masha (so call the crowd a girl in a Burgundy plaid shirt) takes the girl by the hair and stabs her with a knee to the face.

According to media reports, abuse of Schoolgirls stopped one of the residents of the flats, which threatened the bullies to call the police.

Now Polina Maloshtan located in the Chernihiv oblast children’s hospital. According to mother, she had a concussion and other injuries.

“She had a concussion, a very sore jaw, headaches, back injuries, bruises. The child was frightened, was in a stressful condition. At this time she is in the hospital. Till tomorrow she has a very painful injections. Then we’ll take her to Kyiv for examination,” – said about the state of the daughter Valentine Maloshtan. 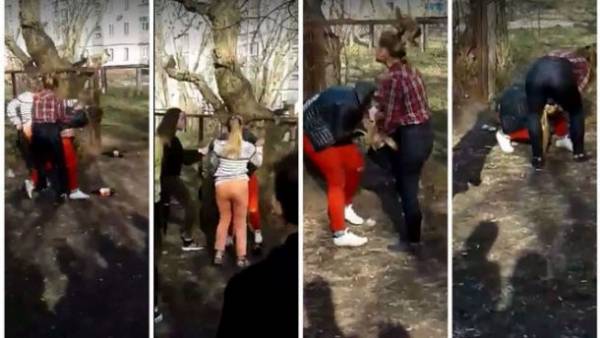 From its own sources the site “Today” it is knownthat the main “heroine” of a controversial movie is student of the 29th and 32nd schools of Chernihiv, as well as a student of Chernihiv national pedagogical University.

The most active girl in the video dressed in a maroon plaid shirt, named Mary. At school say a girl has bad habits, but this behavior from her did not expect.

“She has such a bad habit like Smoking. So her behavior was discussed at the meeting,” – said the Director of the school № 29 Galina Sovetov. She does not deny: the girl with the character, but that was capable of this, no one could have imagined.

And the girl Nastya from the 32-th school teachers responded positively. They say that parents are always concerned with education and upbringing of the child.

“Very positive girl, brought up in a good decent family. Comments to her upbringing and behavior was not. The fact that she was seen in such company, for us amazing. Parents are constantly going to meetings. Starting from the first class, always interested in education and upbringing of the child. She’s a good child. I wonder what happened what happened”, – said the Deputy Director on educational work Nataliya Petrenko.

The third girl is 18-year-old Eugene Timchenko. She is a student of the first course and, as it turned out, studying to be a kindergarten teacher. 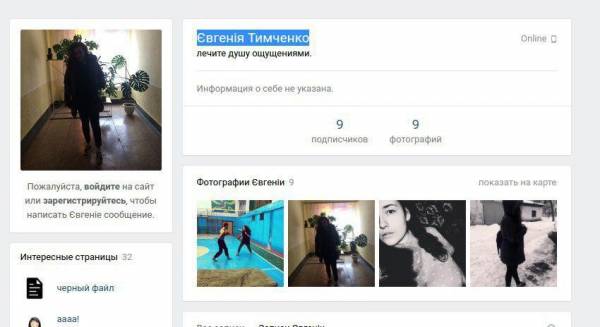 The page of the girl in social networks / Screen: Apostrophe

The girl’s school did not miss and did not violate discipline, told “Today” the Dean of the faculty of primary education Alexander Bobyr.

“Violations of labor discipline, non working plan, gaps were not. Just an ordinary student. Her specialty is preschool education. She was supposed to be a kindergarten teacher and an English teacher for kids. Know they differently behave in the University – then she makes the situation to be kept. But the environment at the place of residence and the different companies are affected differently. Close friends in the group she was not – she kept aloof,” says Dean of the faculty of primary education. And adds that participation in a fight the girl could be expelled from the University.

“Will give a legal assessment by lawyers. We saw it happen only on the Internet, but what we have seen, incompatible with the status of a teacher,” said Alexander Bobyr.

The injured 14-year-old Pauline is a student in the 34 school. Teachers say that the girl sociable and peaceful.

“The girl is not the problem, not the student. Average level in school. Contact with children communicate normally, there are a few friends. Middling. Conflict situations were not – peaceful child”, – says the Director of the school № 34 Alexander Khanin.

Not the first time

Valentine Milostan says her daughter Pauline is not the first who suffered from the cruelty of these young people. On Saturday, April 1, the same company beat 15-year-old friend Pauline Maxim, says the woman. It happened on a Park bench. Supposedly Mary (the girl in the Burgundy shirt in the first video) came up and sat down at the hands of Maxim.

“Then a guy came up to this girl and they played a scene of jealousy. In General, the boy was beaten. He never addressed. His mother is also in shock. I’m afraid to tell somebody,” added Valentine Maloshtan.

According to her, after wide media coverage, have five children told the parents that have become victims of bullies. But to go to the police they fear.

At the same time, in social networks began to appear more videos beating kids. On one of the rollers two “heroines” of the previous scandalous video beating another schoolgirl. All to happen in a residential neighborhood of Chernihiv.

Despite the intervention of the adults, the Teens knocked the girl to the ground and pulled her hair. One of these intruders gets the girl lying feet.

As told “Today” the press service of the police of Chernihiv region, police opened two criminal proceedings on the fact of group bullying.

“Open criminal proceedings under part 2 of article 296 of the Criminal code of Ukraine – hooliganism committed by a group of people. All participants of this event are established, interrogated in the presence of parents and teachers. Materials from the social networks attached to the criminal proceedings. The investigation is being conducted”, – said the head of the press service of the police in Chernihiv region Sergey Bryl.

Militiamen note that in such a crime, even a minor faces up to four years of imprisonment.

The investigation is ongoing. Now the police have interviewed 32 people, including witnesses and suspects. If the blame of teenagers prove they can be behind bars Melitopol educational colony. But the final fate of the participants of the fight will be decided by court.