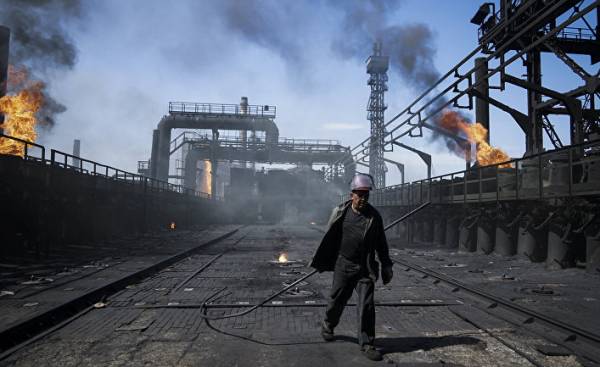 Avdiivka, Ukraine. In the beginning of 2015, General Director of Avdiivka coke plant in the East of Ukraine Musa Magomedov gathered 100 of supervisors and gave them a choice: they can either get out of this billion business, or to continue to work.

In the course of the escalation which began in April 2014, the bloody conflict between Pro-Russian separatists and Ukrainian forces in Eastern Ukraine, the plant, located at 547 kilometers South-East of Kiev, was on the front lines of the bloodiest conflict in Europe since the Yugoslav wars of the 1990s years. Head over to and then whiz went the rocket, and for the “hiss” of the factory machines differed noise of heavy artillery.

“It was unfair to ask people to come to work and daily life at risk if they were not related to the decision-making process,” he says.

Despite the risks, the workers decided that the plant needs no matter what function, thereby providing at least some sense of normalcy, heating and so necessary for inhabitants of the region income.

Now, two years later, the blockade in Eastern Ukraine threatens the future of the plant and Avdeevka health and the already shaky economy of Ukraine. In January, activists with the support of some politicians, initiated a blockade to stop trade between enterprises in the Ukrainian and separatist-held territories. In mid-March it was joined by the government, radically changing the course of your actions and announcing the full transport blockade of areas controlled by rebel forces, which does not portend a weakening of the conflict in the near future.

“What am I supposed to say to these guys, because they are already experienced enough? “Sorry, but policy is more important than your wages”?” said in despair Magomedov.

Too high stakes for the Town of the Donbass region and Ukraine in General. Economic uncertainty that arose in connection with the termination of the trade, prompted the international monetary Fund to postpone the granting Ukraine the next tranche. According to the Prime Minister Volodymyr Groysman to the end of the year Ukraine will lose 75,000 jobs and at least 3.5 billion dollars revenue from foreign currency transactions. According to Reuters, the country’s Central Bank fears that if the embargo is not lifted, growth is cut in half.

In three years of conflict the population of the Town dropped from 35,000 to 16,000. Magomedov says that people call him, before you open your business, wanting to ensure that salaries will be paid on time. (During the thirty minute interview he got a call three times. One of them was the mayor, at the time factory.)

Magomedov said that 200 of the 4 000 employees of the plant were removed from their usual twelve-hour work shifts — similar steps were taken in 2014 and 2015 in the midst of the fighting. Just for something to do, some started repair work, other study instructions. They only receive 66% of his monthly salary in 223 USD. The General Director of the plant concerned in case of continuation of the embargo in April, your seat will be lifted a further 800 workers.

Natalia, one of the employees involved in the study instructions, is against the blockade. “The system was created in Soviet times, it all connected. I understand that policy might want to change something, but it takes time. To do anything that’s so random I find it totally meaningless.”

The fate of the industrial workers of the region of little concern to members of the blocking groups located in the city of Bakhmut in a half-hour drive from the plant. They focused on what is called the “trade blockade on blood” between Ukrainian enterprises in the occupied separatist areas and those controlled by the state.

A group of several dozen people, zapaskas canned food and pasta, as well, as it turned out, Molotov cocktails, broke camp here, blocking the movement of trains. Since then, as of January 26, protesters staged the first blockade, the separatists took control of a Ukrainian enterprise on its side of the demarcation line.

Before was a full blockade, Kiev allowed freight trains to cross established boundaries, serving factories and mines, which are the main livelihood of the industrial region of Donbass. This trade for anybody was not a secret — the Western press spoke of it in 2015. The plants controlled by the separatists continued to pay millions of dollars in taxes, so essential to the Kiev and the separatists, thus preserving thousands of workers in the region in their places.

While in the ongoing conflict workers received regular payments, doing business with the separatists believe the protesters have helped keep the self-proclaimed Republic afloat, and owned by industrial enterprises of the region oligarch Rinat Akhmetov continued to make a profit.

Semyon Semenchenko, a member of Parliament, known as the activist “euromaidan” — the wave of demonstrations demanding closer ties with Europe and a more transparent form of government now became an active supporter of the blockade. The explanation is simple: “Trade with the occupiers is the financing of terrorism”, — said Semenchenko, citing separatists and the ongoing conflict with the Ukrainian authorities.

Opponents of the embargo believe that the reduction in the supply of coal can also lead to power outages, since about 15% of consumption of electricity generated from coal. Semenchenko denies such concerns, believing that Ukraine needs to diversify its energy sources.

According to him, the prolonged suspension of trading much of the region’s industry will not harm. “Because we have a good anti-depressant Prozac. It will help people to worry less”.

In Kiev the support of the siege originally was divided between competing factions, and Groysman called the protesters ‘ encampment “populist PR”. However, shortly after the security services violently dispersed one of the camps, and the rebels seized the Akhmetov-owned enterprises on the territory of the separatists, the ruling coalition, changed its position. According to them, the blockade will continue until, until returned to the company, captured by the rebels, including those belonging to the richest man of Ukraine is Akhmetov.

However, the blocking groups say that soon I shall not be moved. The man, who calls himself a “Katana” in honor of the Japanese samurai sword, believes that the rhetoric of Kiev — just a red herring. “They want us gone and will continue to trade with the invaders,” said he, referring to the Russia-backed separatists of Donbass.

Meanwhile, Director General of the coke plant Magomedov said that doesn’t know exactly how long it will last supply of coal. The needed coal can be mined in the USA and Australia, but it is more expensive. The blockade caused damage to the plant in January and February. “We are part of the system,” he says. “If the plant is cut off from suppliers, this does not Bode well in the future.

And on the factory production site over a wagon filled with coal, to be transported on the factory track for smelting in coke, watching from the corner office Windows Gennady Golovatyuk.

“That’s the idea,” he grinned, pointing to what is happening outside. 59-year-old man has devoted his entire career coke industry, and the last 20 years worked at the plant in Avdiivka. Responding to a question about current events, he voiced a wise thought: “don’t choose a house, choose neighbors.”

The question is, will it arrive any time soon a new batch of coal, he asked to address the “neighbors” and not him.