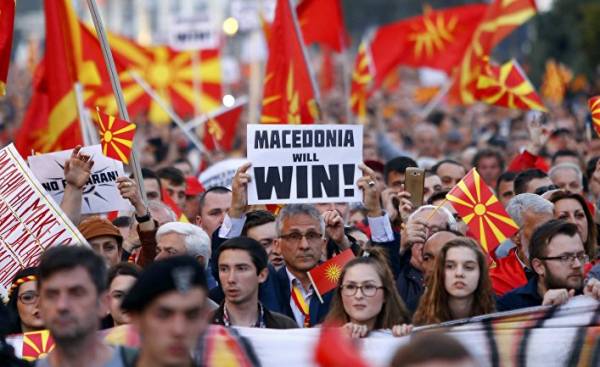 Russia is showing an unprecedented interest in the Balkans. On Sunday Pro-Russian party was defeated in parliamentary elections in Bulgaria, however, the Kremlin has another area where you can turn around. In Macedonia, a political crisis threatens to escalate into a military confrontation, if the three leading political forces fail to agree. Western observers say that Russia is interested to intervene in the internal Affairs of Macedonia to refocus foreign policy vector of the country and to restore its influence in the Balkans.

European Commission President Jean-Claude Juncker, recently criticized U.S. President Donald trump, who welcomed the British exit from the EU. According to the European official, in the event of a collapse of the EU in the Western Balkans, there will be a new war. Apparently, Jean-Claude Juncker was referring to a threat of escalation of the conflict in Macedonia.

Now, this Balkan country is in a state of political crisis. According to the results of the parliamentary elections in December last year, defeated the ruling nationalist party’s “Internal Macedonian revolutionary organization — Democratic party for Macedonian national unity” (VMRO-DPMNE, 51 of the 120 seats in Parliament). The opposition party “Social democratic Union of Macedonia” (SDSM, successor of the Macedonian Communist party) won 49 seats, and the party of the Albanian minority “Democratic Union for integration” — 10.

Depending on who will join the Albanian party, will depend on the composition of the future coalition. The Albanians refused to form a coalition with VMRO-DPMNE. The capital Skopje has swept protest against the creation of a coalition between the social Democrats and Albanian. The European Union threatened to impose sanctions against the President of Macedonia Georgi Ivanov (a member of the ruling party VMRO-DPMNE) and other officials if they interfere with the formation of the coalition.

The contradictions between the Slavic Macedonians and Albanians existed for a long time. Albanians make up about a quarter of the 2 million population of the Republic. They are concentrated in the West of Macedonia on the border with Albania and Kosovo and constitute the majority of the population in the municipalities of Tetovo and Gostivar, little more than half — Debar, Struga, Kicevo. Under the influence of the armed activities of the Albanian separatists in neighboring Kosovo, which seceded from Serbia in 1999, the Macedonian Albanians, led by Ali Ahmeti has created in 2001 the national liberation Army. Albanian separatists wanted to implement the Kosovo scenario in the West of Macedonia. Albanian separatism is based on the idea of so-called greater Albania, which provides for the accession of Albania to the modern territories of Serbia, Macedonia, Greece, Montenegro, where the Albanian minority.

Then armed clashes between Macedonians and Albanians ended with NATO support. The political forces of the Macedonians and the Albanians signed the Ohrid agreement in August 2001 which suggested the cease-fire, the prohibition of violence for political purposes, territorial integrity and unitary character of Macedonia. The Albanian language has received official status of a regional language. The separatist leader Ali Ahmeti went into politics and founded one of the most influential parties of the Albanian minority “Democratic Union for integration”. Since 2008, the Albanian and VMRO-DPMNE agreed on the coalition in Parliament.

Political “idyll” between the Macedonian and Albanian nationalists continued until the spring of 2015, the leader of the opposition SDSM Zoran Zaev posted incriminating records Frank conversations of the Prime Minister and leader of VMRO-DPMNE Nikola Gruevski and his associates about the possibility of the use of force against political opponents, falsification of election results. There was even a recording in which the Minister of internal Affairs discussed with the chief of intelligence to the Prime Minister of the Mercedes with massage chairs, through the Ministry of the interior.

Corruption scandals negatively affect the image of the political elite. Macedonia is no exception. Macedonian social Democrats provoked protests against Prime Minister Nikola Gruevski. Albanians also participated in anti-government protests. Relations between the VMRO-DPMNE and Albanian politicians who gravitated to an Alliance with the SDSM, began to deteriorate. The Prime Minister resigned in January 2016, the Journalists began to compare Nikola Gruevski with the fugitive ex-President of Ukraine Viktor Yanukovych.

However, the parliamentary elections in December 2016, slightly more than half of the Macedonian voters voted for VMRO-DPMNE, despite the scandal involving Gruevski. Slavs-Macedonians of two evils I see at least VMRO-DPMNE, which takes an uncompromising stance regarding the preservation of the unitary state structure of Macedonia and not allow the excessive strengthening of the Albanian separatists. Under the current regime, unemployment in Macedonia has declined in the years 2012-16, up from 31% to 23.1%, production growth increased with drop 2.8% to 3.5%, wages increased from 21.4 thousand to 34.3 thousand dinars.

Concerns among some slavomacedonia of the population is the fact that the leader of SDSM Zoran Zaev flirts with the Macedonian Albanians in the hope to negotiate with the coalition in Parliament. In order to PR the leader of the social Democrats even photographed against the backdrop of the Albanian flag. It is not excluded that between the SDSM and the “Democratic Union for integration” there are secret agreements about cooperation against the ruling party. The subject of these agreements can be anything from the provision of Albanian language as the second state to change the territorial organization of Macedonia and the creation on territories of compact residence of the Albanian minority in the region with a special status and the right to a special relationship with neighboring Albania and Kosovo in the economic and immigration issues. This is just fear most of the Slavs-Macedonians, who for 16 years has not erased memories of the threat of Albanian separatism to national security.

No wonder the President of Macedonia Gjorge Ivanov refused to provide Zoran Zaev the mandate to form the government. In his opinion, the formation of a government of social Democrats with the Albanian party threatens the “sovereignty, territorial integrity and independence of Macedonia.” Before that, in January, the Macedonian President handed over the relevant mandate of his party VMRO-DPMNE.

The EU acts as an intermediary in resolving the political crisis in Macedonia. With the mediation of Europe, the current government and the opposition agreed to hold early parliamentary elections. European experts have substantiated the authenticity of the scandalous recordings. The EU supports the SDSM and the Albanians in the United States, Nikola Gruevski for corruption and attempting to exceed authority. Political scandal is not the last reason why Brussels drowns VMRO-DPMNE. Otherwise, Jean-Claude Juncker would not have to Express concerns about a new war in the Balkans.

The EU fears that if SDSM and the Albanians will not form a coalition, then there is a threat of a coup. It is likely that political instability can take the advantage of the Albanian separatists and to announce secession from Macedonia Western territories. Against the background of political instability Albanian separatists have already demonstrated strength. Clashed with the Macedonians in the capital Skopje during anti-government demonstrations, groups of Albanian militants attacked state institutions in the city of Kumanovo in may 2015, Macedonian law enforcement authorities have killed 14 militants. In neighboring Kosovo Albanian movement “self-Determination” called Nikola Gruevski as a dictator. In case Kosovo is not averse to support compatriots from Macedonia. During the Kosovo crisis in the 90’s in the Western parts of Macedonia came 200 thousand Albanians.

European countries have participated in conflict resolution in the Balkans. For the sake of establishing peace in Bosnia and Herzegovina, Croatia and the relative calm in Kosovo, it took a lot of time and money. European peacekeepers located in the conflict zones. In resolving the conflict in Macedonia in 2001, the key role played by European member countries of NATO. In the framework of NATO peacekeeping operations “a Rich harvest” under the leadership of Danish major General Gunnar Lange of about 3.1 thousand of the British military in a month collected and destroyed 3.3 thousand units of arms of the Albanian separatists. The EU is not interested again to put out the “powder keg” of Europe in terms of the migration crisis and the military operation against ISIS in Syria and Iraq. Than to get involved in the settlement of a new armed conflict, Europeans easier to pass the reins of power in Macedonia opposition.

Macedonian nationalists and the interests of the Kremlin

Due to energy interests Nikola Gruevski began to cooperate with Russia in the sphere of realization of the project of the gas pipeline “Turkish stream”. The pipeline will stretch from Turkey, Greece through the territory of Macedonia to Serbia and then to the countries-EU members. Energy cooperation has smoothly passed in flirting with the Kremlin in the political sphere. Contrary to the existing problem of Albanian separatism, the Macedonian authorities refused to participate in the anti-Russian sanctions in 2014 after Russia annexed Crimea and sponsored separatism in the Donbas. Moscow supports Skopje in the confrontation with the opposition, considering that SDSM and the “Democratic Union for integration” sponsored by the West, including “the Soros Foundation”. In 2016 the Kremlin party United Russia has established contacts with the leader of “Democratic party of Serbs in Macedonia” (DPSM) Ivan Stoilkovic, which is part of the coalition “For better Macedonia” led by VMRO-DPMNE. DPSM defends the idea of military neutrality of Serbia, Montenegro, Macedonia, Bosnia and Herzegovina.

Russia is interested to intervene in the internal Affairs of Macedonia to refocus the country on cooperation with the Kremlin to disrupt the process of integration into the EU and NATO and to restore its influence in the Balkans. To implement a similar scenario in Montenegro did not work. Not helped by the Serbian ultranationalists who tried to overthrow the current government in a coup d’état. The Russians act according to the scheme tested by the Americans in Croatia during the military conflict in the 90s to gain a foothold in the Balkans, the United States provided military assistance to the Croatian government in the fight against Serbian separatists to restore the territorial integrity of the country. Russia is beneficial to the political crisis in Macedonia escalated into an armed conflict with Albanian separatists. If again there are clashes between Macedonians and Albanians, Russia can first send the Macedonian government’s military experts and weapons to pacify the Albanian militants to the intervention of the EU and NATO in resolving the crisis.

Russia expects to win the trust of the Macedonian political elite. Macedonia does not take the EU and NATO since the 90s because of the position of Greece. Athens require from Skopje to rename the name of the country. In Greece there is a province of Macedonia with its centre in Thessaloniki, which is 25.9% of the country and home to 100 thousand of the Slavic population. The Kremlin will try to present itself to us as a more reliable partner than the West. Armed conflict will exacerbate migration crisis in the EU. String of refugees in case of conflict, you head West, which will exacerbate migration crisis and weaken the EU’s position in the region. The escalation of the conflict in Macedonia beneficial to the Kremlin. In this case, the United States, which helped the Kosovo Albanians to gain independence for the sake of reducing the influence of Serbia, will have to face Russia face to face in the Balkans. Apparently, this is trying to bring Jean-Claude Juncker to the White House. 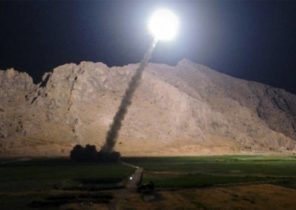