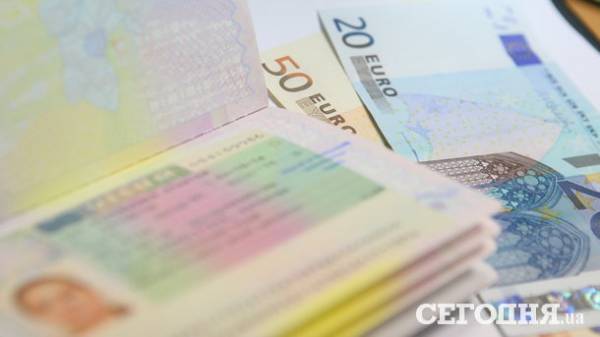 While we wait for a vote of the European Parliament for the Ukrainian bezviz, and Georgia celebrates the introduction of its visa-free regime, the European Commission has published statistics on the Schengen area, including in Ukraine over the last year. “Today” has analyzed the report and found out which Consulate most Ukrainians have applied for a visa, who everyone loves and, conversely, rejection hurts.

PLUS 180 THOUSAND. When compared with 2015, the number of Ukrainians who would like to obtain a “Schengen” last year, grew by almost 13%. Two years ago he tried to 1.2 million people in 2016, this number increased to 1.4 million, Respectively, increased the absolute number of failures — from 40 to 45 thousand. But this unpleasant statistic overlaps the common figures: today, on the contrary, to talk about increasing the number of those who receive a Schengen visa, by 180 thousand people.

The leader in issued visas to Ukrainians for several years, remains Poland: over the past year it has issued 560 visas. But it is worth noting that almost all the consulates of Poland in Ukraine (six: in Kharkiv, Kyiv, Lutsk, Lviv, Odessa and Vinnitsa) increased the number of failures. For example, if in 2015 the Consulate in Kiev refused, only 1.8% of candidates in 2016- 4.2 percent. The only exception was the representative in Vinnitsa, which is still the most negative of all — instead of the 12% failure rate was 7%.
The most disloyal to the Ukrainians, the visa issue is the Czech Republic, which was formerly one of the leaders in the number of failures. In 2015, the Czechs refused to 4.2% of Ukrainian applicants (2.7 thousand employees) and in the past year of 6.5% (5.7 thousand).

GUILTY. “A number of the frequent failures is primarily due to the fact that Ukrainians have become increasingly travel to the zone of “Schengen”. Last year alone, the number of visa applications has increased by almost 200 thousand, — says the Manager of the capital travel Agency Vladislav Kifaru. — And the Consulate, in turn, become much more thoroughly check the documents of tourists.”

Tour operators say the majority of the failures in the past year justified, and usually they blame the applicants themselves. “Poland recently a lot of attention to the verification of the purpose of the trip. Cases when people entered the country on a tourist visa and remained to work there, told us the travel agent Alina Chepurko. — In addition, the Czech Republic, Germany and Sweden increasingly began to check the information about the tourists — from work, from the Bank. Especially now that make it easier — many banks provide this information by number reference”. 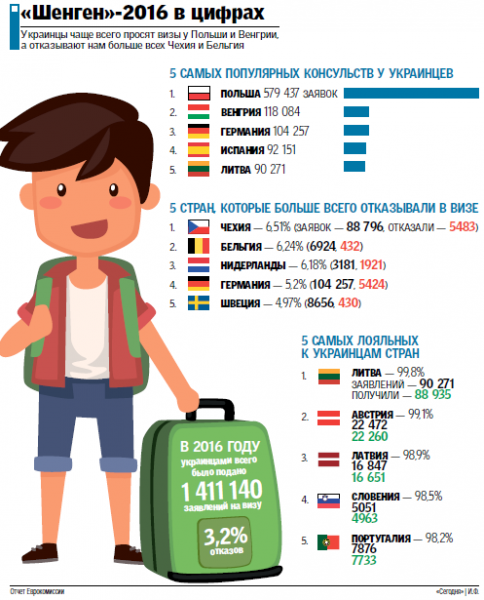 GOOD NEWS. At the same time more loyal to the Ukrainians become Lithuania. So, in 2015, the visas were denied, only one percent of Ukrainians (from almost 75 thousand applicants) and last year this figure dropped even lower to 0.2%. Thus, of the 90 thousand applicants of Schengen it has received only 167 people. Positive signals in this regard are Austria: in 2015, the country refused 223 Ukrainians (1,1% of all applicants), and this year their number decreased to 207 (of 0.9%). This is despite the fact that the number wishing to obtain a visa at the Austrian Consulate increased by 3,000 people. Finally, if we talk about max loyalty, then the leader was Slovenia — a total of 75 negative solutions. The Balkan country approved of 98.5% of queries (almost 5,000 people).

Multivisa. We should also pay attention to changes in the number of multiple entry visas that allow multiple entries to the Schengen area. This year most of all they came from the Netherlands and 82% higher than in 2015 by 13%. Thus, of the 29 thousand visas issued Nederlandse 24 thousand — multivisa. Second place goes to Lithuania from 78%, which reduced the rate last year by almost 1.5%. The bronze medalist of the rating of the “multiprocessing” countries was Poland — last year the number of visas issued by the Consulate of Poland, rose by more than 3.5%, amounting to 76% of all visas. Special situation with Slovenia. If in 2015 the country gave the Ukrainians 99.7% of the multivisa of the total, last year this figure did not reach even 40%.