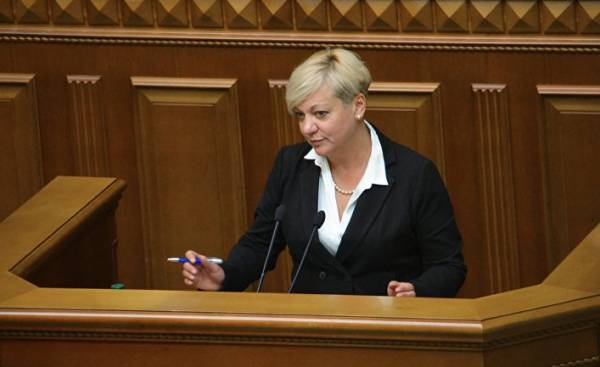 Basically, the heads of Central banks do not face physical threats in the office. But in Ukraine they also don’t work.

After the President Petro Poroshenko, four months after the beginning of the democratic revolution in Kiev, suggested Valeria Gontareva head of the national Bank of Ukraine, she closed 87 dysfunctional banks, and at the end of last year nationalized the country’s largest “PrivatBank”. According to her, on the part of those privileged circles, with whom she is fighting, she is “quite incredible pressure”.

“I can think of is the continued persecution, — said Gontareva. — There were a ton of fabricated information, was the manipulation, the real evil of slander and libel about me personally and the team of the national Bank.”

Not once was she afraid for their own safety. “One major oligarch personally threatened me in the room with physical violence,” — said Gontareva, pointing to the conference room of the Central Bank with high ceilings and Gothic architecture.

Asked to name the name of the man she politely shakes her head. Two years and nine months of work, this former investment banker has achieved a great deal. Partners from international organizations such as the international monetary Fund, say that 52-year-old Gontareva gave the order to one of the most corrupt and unreliable the banking sectors of Europe. Despite the enormous pressure, she ensured the stabilization of the national currency hryvnia and achieved macroeconomic stability in a country where at the time of the arrival of foreign currency reserves were almost completely depleted.

Gontareva held talks and carried out a series of reforms in conjunction with the IMF that helped to start a program of support for 17.5 billion dollars. In addition, it reduced the state own agencies from 12 000 to 5 000 people.

All this she did in the crisis of the Ukrainian economy, suffering from the Russian annexation of Crimea and the war for secession in the East of the country. Gontareva jokes that can write a new Chapter for textbooks for Finance on the topic “What to do with the country at war, when it is impossible to pretend that everything is going as usual.”

Gontareva is considered one of the leading Ukrainian reformers, a man who is trying to move from post-Soviet to a more transparent European system of public administration. It does its job, despite the fact that he has experience in the Central Bank.

This native of the industrial city of Dnipropetrovsk, has technical and economic education. Having worked for several years as an engineer-designer, Gontareva has moved into the sphere of Finance, where he occupied high positions in the “ING Bank Ukraine” and on the Board of the Ukrainian representative office of the Bank “Societe Generale”. For seven years she was the head of the Kyiv investment company “Investment Capital Ukraine”, which was Poroshenko and his business Empire. Most likely, it was there that she started to trust the future President.

Not having to hold the position of head of the Central Bank Gontareva was subjected to a severe test. When in September 2014, and then in February 2015 in the East of Ukraine has reached its peak, the fighting has declined sharply, industrial production and the hryvnia has experienced enormous pressure. The Central Bank, according to Gontareva, was forced to accept the “absolutely incredible, draconian administrative measures”, introducing strict control of the exchange rate.

Someone criticized Gontareva criticism, calling such measures unnecessary. But the head of the Central Bank notes that the Ukrainian currency has stabilized only because of this tough action.

To restore order in the banking sector, it took more time, but Gontareva said that the experience at commercial banks helped her to quickly understand the scope of the problem.

Of the 180 banks in Ukraine eliminated 87. They are divided into three categories. 20 of them were pure “machines for money laundering,” who had neither assets nor liabilities. They are only used to conceal dishonestly obtained money, typically by way of their output abroad. The second group includes “zombie banks”, which was “some debts and no assets”.

The third category is banks of the oligarchs. They belonged to the magnates that despite the post-revolutionary reforms continue to dominate in business, politics and the media. According to Gontareva, these banks “collected money from various sources, mostly from private contributions, and then put all the money in your business.”

In her opinion, these tycoons do not seem to realize that these deposits lie other people’s money: “They truly believe that they are the richest people in the country and behave as if all the money belongs to them”.

The post-revolutionary economic recession in Ukraine, Gontareva said, showed that some oligarchic banks are nothing more than fraudulent schemes such as pyramid. The largest among them is “Privat”, which lay about a third of all private deposits in the country. When the national Bank of Ukraine found accounts of a hole in the amount of 5.5 billion dollars, “Privat” was nationalized.

It is not surprising that Gontareva has incurred the wrath of the oligarchs. According to her, the former owners of “Privat” Igor Kolomoisky and Gennady Bogolyubov claim that the financial condition of the Bank is not as bad as they say. They accused Gontareva that was organized by state seizure of private property. Another oligarch at the October IMF meeting in Washington, handing out leaflets, which said that Gontareva’s a “danger to the economic stability of Ukraine.”

Due to his former links with Poroshenko, and with one Russian Bank her name last year surfaced in “the Panama document”, which became the property of the media.

She calls all this “black PR” of their opponents. It is not surprising that Gontareva recently hinted about his possible retirement after Ukraine will receive the next tranche of aid from the IMF. Friends she says that was very tired, but feels that his task was accomplished.

“At first I didn’t really want to take this position, but in the end, the President convinced me, and I thought it was a real challenge to achieve plan. It was something like a Patriotic call.”

You can cope with any problem Gontareva says, “if you have a plan, have our own team, if this team is determined and you’re a leader who knows what to do, because you have already prepared a detailed plan of action. And if you have any doubts.”

Managing Director of the European Bank for reconstruction and development on Eastern Europe, Francis Malige (Francis Malige) works together with Gontareva over reforms in the banking sector. “Courage is the first quality of a reformer, and it showed in abundance,” he says, ” as well as competence and independence.” In a meeting before the nationalization of the largest Ukrainian Bank, said Malige, “she remained calm, spoke cautiously and judiciously, despite the fact that it was one of the most intense moments.”