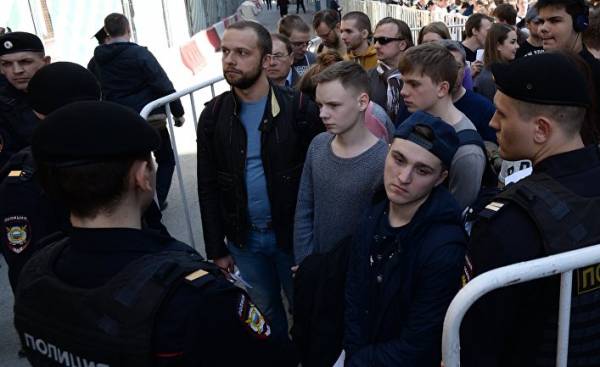 All those wishing to give the appeal to the reception of the presidential administration on Ilyinka in Moscow reminded that in the morning you can see at the American Embassy: the same grey fence, dozens of people squeezed them in his hands — paper. Only the police more. In the last action “#Tired” days, the authorities did everything possible to increase the number of participants: banned associated with Mikhail Khodorkovsky foreign organizations and conducted searches in Russian. Unleashed in these days of unpunished terror against political activists from grassroots opponents of the Moscow renovation to Deputy Sergey Shargunov, not to mention the Bulk, also gave the protest a new impetus.

The memory of the mass arrests on 26 March were still fresh and had the impression that participants will be met harshly. Did not promise anything good and in-depth defense of the police and machinery, flooded the center of Moscow. Each of the presidential administration, whose Windows were hung with some metal shields, it seemed, was not going to open not only on Saturday, but at least until the end of the sudden this summer day.

But then in Moscow something happened, like something has shifted: the clerks in the afternoon came into a lifeless office, all built and began to make paper. The event has turned out in every sense of revealing, about it, even spoke on Federal TV channels. Casually and briefly, and not without the usual in such cases lies with the emphasis on “no one came” and “the police were stressed correct” (actually, no), but still. The impression that everything depended on the number of participants. A thin trickle coming out of the metro station “China town”, obviously, did not promise any revolution. With so many people it was quite possible to run without the use of brute force that opened the possibility of creating a favorable for the authorities of the picture.

And in St. Petersburg and some other cities on the contrary has set maximum rigidity. Not because a lot of people, and, apparently, that, as the Prosecutor said in one recent high profile trial, did not have a “feeling of impunity”. Supporters of the regime can be relaxed: the opposition gave. Moreover, if we consider the percentage of the number of detainees released, at least in the Northern capital it will mean that the police acted tougher than on March 26.

But overall, the experience even remotely resembling that which is left of swept the country antimagnetisch stock, was not close. People came less creative from the bottom is not particularly welcomed, but because it did not have, the purpose of the action was washed out, the word “Tired” was perceived differently. Form for lodging a petition the Tsar for many seemed to be very humiliating. Yes, and people are encouraged to go, cause of the opposition of the audience many questions. To Khodorkovsky, and valyeev’s claims and suspicions much more than to Navalny, Volkov and Sable.

From these comparisons is not going anywhere. Two stocks to each other, by two different opposition forces who profess different models and approaches to the political process, led by different leaders belonging to different generations. In the opposition to decide: “any motion plus” or “weak action discrediting protest and de-motivate participants”? It is impossible not to notice how it changes the situation: the discussion, whether all the protests after the “swamp of repression” or not, gave way to discussion, which stocks more effective.

If Mikhail Khodorkovsky has actually supported the performances on March 26 and was attended by activists of the “Open Russia”, Alexei Navalny carefully distanced himself from the “#Tired”, did not mention it in their public statements, and other well-known figures from the Fund of struggle against corruption. It resembles, so to speak, “competition etiquette” in the media. Media try not to mention their competitors, believing that by calling them, doing them. As Putin and his entourage arrive from the Bulk.

The analogy with the competing media is more than appropriate. Though, because Khodorkovsky and Navalny got their own media. “Postcard” made a good information and journalistic resource, whose role in the FCO, to some extent, runs the blog and Twitter of the Creator of the Fund. Navalny said so successful online television that his Studio people in uniform defeated the right on March 26. Now a similar TV is and supporters of Khodorkovsky, it led the broadcast with “#Tired”. But it looked much worse than the marathon Leonid Volkov, ended his 15-day arrest.

This is amazing. It seems that the oligarch, though, and lost badly, but still unimaginable for most people, money can create and structure effective, and the media to build popular. But it is not working. The only good staff find the MBH — chief editor of “Postcards” Veronica Kutsyllo, and, as a consequence — the good, the quoted media.

The rest — expenses Mikhail Borisovich on opposition activity look extremely inefficient. Online-TV — boring and nadryvov, action — rescue service leaders is questionable. FBC, existing on donations, achieves much more without any oligarchic income, and most importantly — really attracts large numbers of people, especially young people, including as volunteers. However, everyone spends their money the way he likes.

Another thing is that before KHODORKOVSKY opens a sad prospect to opposition politics: to continue to spend money on inefficient and ineffective people in the organization or become submissive purse of one of the opposition leaders, of which Russia now not so much: Navalny, Dmitry Gudkov and perhaps Evgeny Roizman. The Khodorkovsky be a leader not impossible that perhaps he himself admitted after leaving the post of the leader of the “Open Russia”.