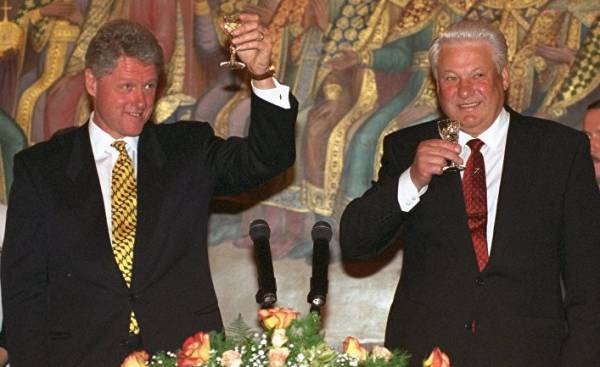 The media and US policy continue to spread unsubstantiated statements that Russia allegedly tried to influence presidential elections in the United States. But the true expert on influencing elections in other countries are the US itself. This country 81 times tried to influence elections in other countries. This statement was made by Dov Levin (Dov Levin), a member of the University of Carnegie Mellon. He created the database. containing facts and documents about these events, writes the Los Angeles Times.

One of the first examples in this database is a massive US intervention in the first postwar elections in Italy in 1948.

Levin stated that “we used everything you can, including the kitchen sink for washing dishes” to help the Christian Democrats defeat the Communists in Italy, including secretly sent “bags of money” to cover campaign expenses, subsidies for projects such as land reclamation and threats to stop US aid if are selected by the Communists.

Levin said that the US intervention seems to have played an important role, preventing the Communist party to win not only in 1948, but in the next seven Italian elections.

Today people in the United States and the so-called American experts should be of interest to other manipulation of the elections, namely the massive US intervention in the election campaign in Russia during the presidential term of bill Clinton (Bill Clinton), to ensure the victory of Boris Yeltsin. It happened in 1996. And the initiative had come from none other than the President himself.

Pro-Western Boris Yeltsin managed to become extremely unpopular in Russia, because his economic policies were disastrous for the Russian economy and led to the fall of GNP by 50%.

The country was in hyperinflation, a big increase in crime, the collapse of medical care, the pension system, violations of the food supply and a sharp decline in life expectancy.

In 1993, Yeltsin took the presidential decree on the dissolution of Parliament. In response, the deputies occupied the Parliament building. Yeltsin used the intelligence from the US when sent the army against the people’s representatives, fired on the Parliament and killed probably 2 thousand people. Here this “man of democracy” the US helped defeat in the 1996 elections.

US interference in elections at that time was no secret. Time magazine then took 15/7-1996 with a cover on which was written “Yanks to the rescue” (“to help the Yankees”).

In the introductory part of the article the magazine says, what are you talking about.

The secret story of how four counselors USA used polls, focus groups, negative advertising and other technical means of the American campaign to help the victory of Boris Yeltsin.

A 10-page article describes in detail three American scouts, who set up headquarters in Russia and worked there for four months, to ensure the victory of Yeltsin. These three were Joe Sumat (Joe Shumate), George Gorton (Gorton George) and Richard W. Drezner (Richard Dresner).

USA paid them 250 thousand dollars, in addition, they had an unlimited budget to conduct public surveys, focus groups and other measures. They were undercover agents for the sale of flat TV screens. Russian police armed with machine guns, guarding the house where they lived.

Their first studies showed that Yeltsin was supported by only 6% of voters. “Stalin had more supporters than Yeltsin,” said Drezner. According to the American survey, 60% of voters believed Yeltsin’s corrupt, and 65% thought he destroyed the economy.

But they also noted that many Russians were afraid of civil war. So they formed the slogan: together with Yeltsin you will avoid unrest.

At the same time, the United States through the IMF gave Russia a loan of 10.2 billion dollars that the Russian government was able to pay salaries and pensions, which were to be paid much earlier.

Bill Clinton as an Advisor of Yeltsin

Campaign announcements and manipulation of the media, carried out by U.S. intelligence officers provided the offensive actions of Yeltsin in the election campaign. However, there was no confidence in his victory. These three Americans got in touch with an Advisor to bill Clinton Dick Morris (Dick Morris) and asked for his help. They wanted Clinton agreed to give Yeltsin one of the world leaders at the meeting of these two politicians in April 1996. This view passed in Russia successfully.

Morris, who later quarreled with Clinton, said in an interview, “America Talks live” in September 2016: “Once, when I worked for Clinton, he called me and said, “I want the President of Russia chose Yeltsin and Gennady Zyuganov”. Zyuganov was a Communist and acted as his rival. Putin was the chief supporter of Zyuganov. Agreed that Clinton will meet with me every week. We had to analyze the surveys that my colleagues in support of Yeltsin, and every week they sent me their results. With Clinton we got acquainted with them, and bill outlined the main line, talked with Yeltsin and told him what to do, where to campaign and what to take a position. He, in essence, was a political consultant to Yeltsin”.

As you know, Yeltsin won the election, and Time did not hide the role played by the US in his victory. In 2003 it even became a theme in the movie “Spinning Boris” (the”Project Yeltsin”).

There is quoted then-President Dmitry Medvedev, who said: we know that Boris Nikolaevich Yeltsin did not win in 1996.

Maybe one day it will be confirmed, but there is no doubt that the US used powerful means to influence elections in Russia and to ensure the electoral victory of a corrupt and ineffective Boris Yeltsin. In light of these facts and of documents confirming 81 US attempt to influence the outcome of elections in other countries — excluding coups and military intervention — play around the so-called Russian influence on the presidential election in 2016 looks pretty strange Scam.