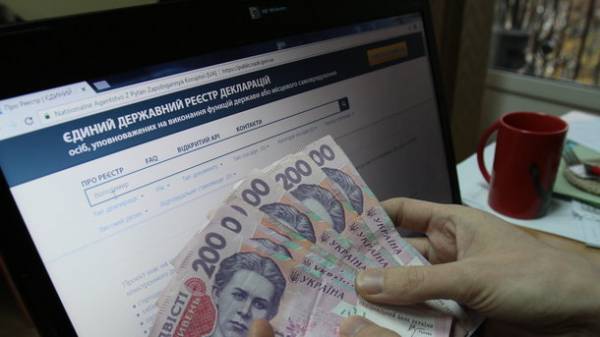 Around electronic declarations, another scandal broke, Parliament adopted changes, for which public men-yet required until the beginning of 2018, to report their income for 2017. The new rule immediately led to a wave of outrage among the fighters against corruption and people’s deputies. “Today” figured out the new rules and found out there is a compromise in this situation.

WILL TELL ALL. Initially it was assumed that from the list of declarants only exclude ordinary soldiers, sergeants, Junior officers and cadets of the military departments. However, between the first and second reading of the document acquired one rule, which expanded the list of those who need to report their income. Now until early next year, the electronic Declaration will have to submit the members of the Supervisory boards of state-owned banks and state-owned enterprises, public councils under the ministries and even the candidates. However, the most controversial was the decision to oblige public anti-corruption organizations to file e-returns. And the rule spelled out so that her act can get not only the members of such organizations, but even their contractors: “to Declare income to those who receives money, property in the framework of the implementation in Ukraine of programs (projects) technical or other assistance in the sphere of combating corruption (directly or through a third party or in any other way)”. It turns out that, for example, suppliers of office and even the speakers, which will invite public men will be obliged to report. At the same time for false declarations or failure to apply the penalty to 800 thousand UAH, or imprisonment up to 2 years.

The YET. Social activists are extremely unhappy with the new norm. The head of the Public lustration Committee Alexander Drik believes that the Declaration will be an occasion for questioning. “The question is not filing, but is there a legitimate reason or not. Worn out by the courts, will be endlessly questioned, to make administrative reports,” — said Drik. In the Center of counteraction of corruption, adding that in any edition of such a law will not lead to financial transparency, as stated in the explanatory Memorandum, and to the blockage of the anti-corruption organizations. Have joined in the criticism of the amendment and Vice-speaker of the Verkhovna Rada Oksana Syroid. It on his page in the social network stressed that recent changes in the terms of the Declaration, the power is simply retaliating against community activists for their anti-corruption activities.

HAPPY. In the Parliament of the claims of the community do not understand. “Together with them we developed and implemented a system of electronic Declaration, and then the power reported on their income. But I do not understand what public organizations are now unhappy? They require a Declaration from the judges, law enforcement officers, deputies, and do not want to do that. In the US there are all obliged to report their income”, — told us the head of the faction “people’s front” Maxim Bourbaki who voted for the amendment.

EXPERTS. The last word on the amendments needs to tell the President to veto the law or sign it. Political analyst Volodymyr Fesenko believes that the most important thing is not even that created a problem for social activists. “The main problem is that this amendment showed that our MPs make the fight against corruption to the fight against public activists. This is a provocation of conflict with civil society anti-corruption and the undermining of Ukraine’s image in the eyes of our foreign partners. Now there is a corresponding reaction from their side. Therefore, the output out may be a veto from the President, but to say now whether he will take advantage of this right, very difficult,” — said Fesenko.

According to the head of the Secretariat of the Council of entrepreneurs under the Cabinet of Andrew Zablovskogo, today the Parliament is preparing an appeal to the President asking him to veto the adopted law or file a new one, canceling the last edit. “The amendment tried to cancel the next day after the adoption, but did not have the votes,” says Zablovsky. According to him, e-Declaration, it is necessary to leave only for members of community councils in NABOO, NACP and Special anti-corruption Prosecutor’s office.

The world: “Serious step backwards”. Against the amendment have already expressed the British Ambassador to Ukraine Judith Gough: “This is a serious step back, which can limit the ability of public organizations”. With this agreement, and the U.S. Embassy. The American diplomats add: to do the public men of the target is impermissible. “E-declarations, was the goal — the fight against corruption, not the opposition of the civil society. These changes must be revised,” — said the European Commissioner Johannes Hahn.