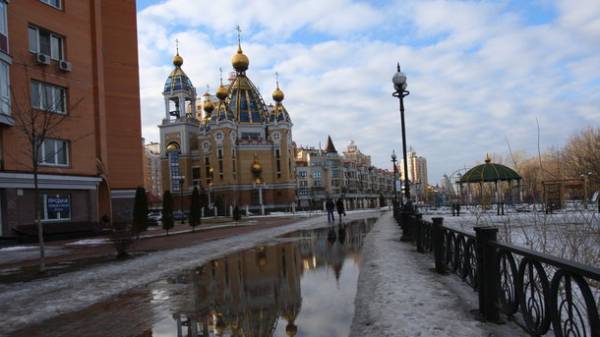 Ukrainians, as reported by weather forecasters, in the next few days expect a rainy and relatively cool weather. In the North the air will warm up to five or six degrees above zero. Precipitation will last until the middle of next week. The website “Today” found out what weather to expect Ukrainians in the next few days.

March 25, relatively warm weather, according to the forecast of weather forecasters, is expected to the South of the country. Here the thermometer to climb up to 9-11 degrees above zero. In the Central, East and West, the air will warm up to 7-9, and on the North from 6 to 8 degrees. While the entire country will be partly cloudy weather. 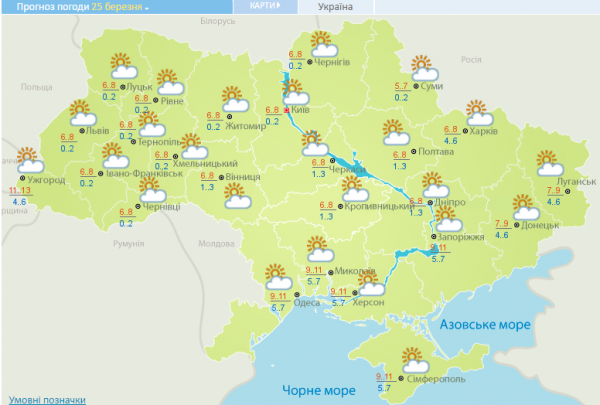 Sunday, March 26, Ukrainians waiting for a sudden change in the weather. Almost the entire territory of the country will pass rains. In the West the temperature will fluctuate in the range of 6-8 degrees, the projected heavy precipitation. The same weather is expected in Central, North and in the capital. In the South will be a little rain, the temperature in the afternoon will rise to the level of 9 degrees above zero. At the same time in the West, partly cloudy weather is expected. 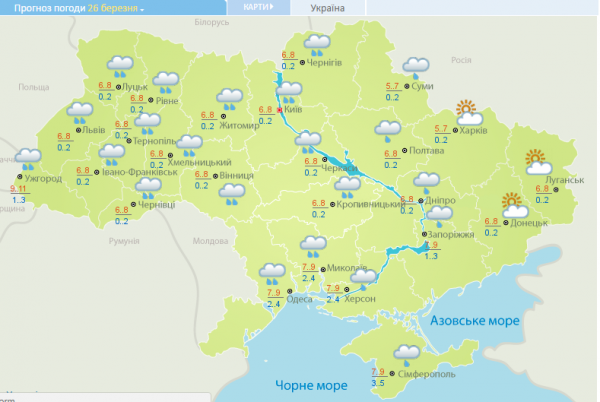 On Monday in the capital and in the North cloudy weather is expectedin the East – partly cloudy. At the same time in the West, Central and southern rains. In the South, the air warms up to 6-8 degrees above zero in the West from 5 to 7, in the center, on the North and East the temperature will rise to +9. 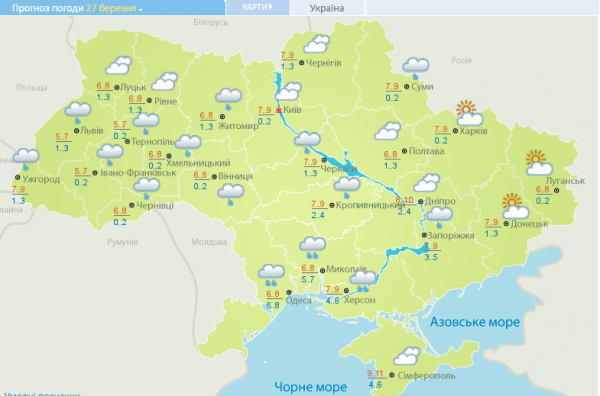 28 Mar rain the cyclone will leave Ukraine. While warming is expected. South to 11 degrees above zero in the West to 10. In the center, on the North and East in the afternoon the air warms up to +9. Throughout the country will be partly cloudy weather.

On 25 March, informs a portal “Weatherman”, revered the memory of the monk Theophanes, Confessor Chigrinskogo and Gregory, Pope of Rome. In people, this day is called Theophanes, you push through the Crust because to this day actively melts the snow cover, soil thaws completely. From that day it is already possible to sow radishes. In the old days said: March 25, if the fog, it will be a great harvest flax and hemp.

March 26 marked the transfer of the relics of St. Nicephorus, Patriarch of Constantinople. In former times noticed: if March 26 is the fog, the summer will be rainy. Watched the arrival of the birds: while the first migratory birds arrive early riser, then to be warm, as if alive — will be cold weather.

March 27 is the commemoration day of St. Theognost, Metropolitan of Moscow. From our ancestors we came to this observation: those who are lucky enough to hear the thunder in this day, can be sure that summer will be fertile. If the spring in rivers of water will not increase, the summer promises to be hot and dry.

28 Mar revered the memory of the martyrs Agapia, Pople and others. That day’s weather predict water and birds. In the old days said: if the spring water flows slowly, the year is expected heavy. If on this day the gulls fly, then you can expect heat. Our ancestors had a custom: if this day night, hear a dog howling, turn the pillow, so sleep was good.

People say: if 29 Mar warm, Sunny weather, and the spring all will be warm. Well, when the snow melts from the sun, not from rain: “When spring is red day herding snow – born bread.”

March 30, the commemoration day of St. Alexis, popularly known as Alex Warm. Alexei is Warm, usually rapidly melting snow. If Alexei is warm, the spring will be warm, if cold – spring will be delayed. Large streams from melting snow portended a wet summer. In olden days it was said: “Alexey, man of God, winter zimsky nothing brings, Top, bake – to-bottom runs.”