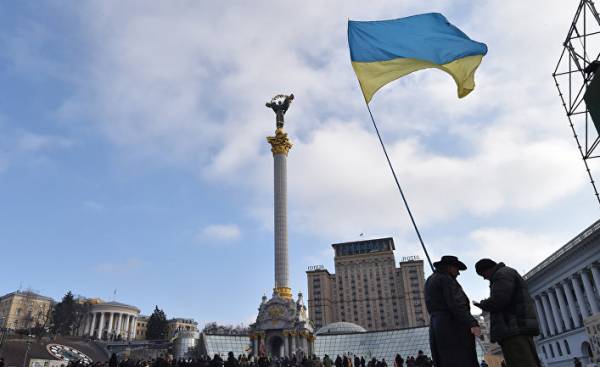 Executive Director of the Eastern Committee of German economy Michael harms (Michael Harms) along with a delegation of German businessmen visited Kiev on 20-21 March and held a series of talks with representatives of authorities and local businesses. In an interview with DW harms gave an assessment of the economic situation in Ukraine, the process of reforms, and also pointed to promising areas of cooperation of German and Ukrainian business.

DW: You have just returned from Kiev, where he was with a group of German businessmen. What is your impression about the situation in the country?

Michael harms: the Overall impression is positive. Of course, the economic situation remains difficult, but there are encouraging signs. In the fourth quarter of last year, the Ukrainian economy showed unexpectedly strong growth. The trade turnover with Germany also grew significantly.

Actively introducing reforms. Of course, there are many areas that need work, but we have the impression that at least in the economy reforms are continuing intensively. Our interlocutors were open in discussing all the issues with which we arrived.

— What you talked about at the meetings with President Petro Poroshenko and Prime Minister Vladimir Groisman?

— Meeting with Poroshenko, unfortunately, at the last moment canceled. This is an example of, in organizational terms, all functions still not very good, if the talks are canceled so spontaneously, shortly before the meeting. Mr. Groisman, we discussed economic issues. Representatives from individual companies raised more specific issues that they were concerned.

— You emphasized that the interest of German investors to Ukraine is increasing, because after two difficult years of recession the country is finally on a course of moderate economic growth. Which sectors are the most attractive for investors?

Here you need to look where Ukraine has a potential for growth. This is the most interesting and important question. Which industries are competitive in the European market? With regard to the agricultural sector, the Ukraine, of course, successful on a global level. This is partially for extractive and heavy industry, particularly steel production. But there is an important for the country’s industry (mechanical engineering, aircraft industry) are in serious crisis.

How to restructure and what new industries can be successful, they must, ultimately, decide the market to free trade area with the EU truly justified. And here in the quality of care we can start, for example, a procurement initiative of the German economy — a closer look and properly assess what the semi-finished products and components are produced in Ukraine, so good that can be exported to the EU. We agreed with the Ukrainian government.

— Who exactly will carry out the selection of promising industries?

— The enterprises themselves. We have identified Ukraine partners: investment agencies, associations of entrepreneurs, chamber of Commerce in Kiev. They will be given (from Germany approx. ed.), the range of products, and then begin a search of Ukrainian enterprises that would be able to release them. Such initiative we have with great success implemented in the Balkans, where the situation was also difficult.

— What industries is it?

— This is a classic industry where traditionally strong position of the Germans: automotive, auto components, electrical items, ie high-tech manufacturing.

— The trade turnover between Ukraine and Germany in 2016 for the first time after three years of crisis. In particular, imports from Germany increased by 550 million euros (nearly 18%) compared to 2015. What products were used by the Ukrainians in high demand?

— First of all, Ukrainians are increasingly purchased in Germany machinery, equipment, chemical products, as well as cars and auto parts. Exports from Ukraine to Germany also increased, albeit not significantly, by 6.5% to € 1.8 billion.

— Interestingly, last year from the Ukraine to Germany was exported to a percentage of less steel and more components for automotive industry.

The customer in fact was not the car manufacturers. It was German companies-suppliers of components. And they went to the Ukraine for one simple reason — because the level of Ukrainian salaries (high level education personnel) is low. However, long-term Ukraine due to this will not survive, it needs additional cost.

And it’s good that’s a start. On the example of Romania, we see that initially, providers can go to the country because of low wages, and then to expand and more and more to increase the level of added value. Hope this is the beginning of a successful journey.

The corruption in Ukraine is a big obstacle for German businesses?

— Here the glass is rather half full than empty. There is a very active fight against corruption and representatives of most firms with whom I communicate, say that in Ukraine it is possible to do business without paying bribes. But on the domestic level and in the political circles is still a big problem. Let’s see what progress will be made here in the near future.

— How can be considered success stories of the Association agreement and free trade area (FTA) between Ukraine and the EU?

— Progress is not large. External trade was reoriented mainly on the EU market. However, it is important to have enough competitive products. The loss of trade with Russia, of course, to fully compensate for failed, but partly compensated. The main thing now is to continue to fill the FTA with specific content.

— However economically, Ukraine is still in crisis. With this level of growth in 2016, 1.2%, the GDP of Ukraine only through the decades to reach pre-crisis level.

— Of course, the level of growth and status of reforms is still inadequate. But let us remember, what were our expectations of two years ago. Yet a year ago the country was threatened by complete economic collapse. It is not excluded that Ukraine will become insolvent, what will happen economic collapse and hyperinflation. And this did not happen.

Banking reform is successful. Ukraine became independent from Russian energy, and thus there has not been much social protests against rising energy prices. Stabilized the domestic political situation. Observed insignificant growth. So here the glass is rather half full than half empty.