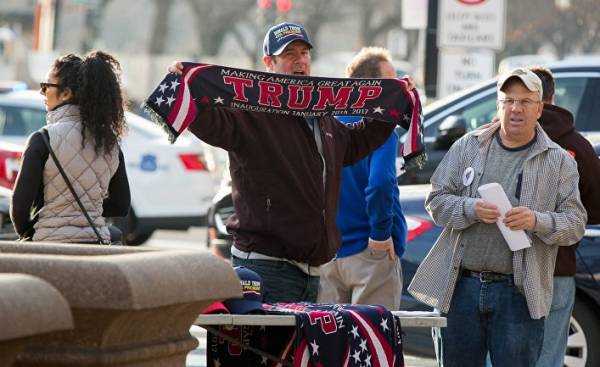 Russia that greeted the President trump, is experiencing increasing frustration with the chaos in American political circles, is called “rush gate”. In April, the head of China XI Jinping needs to visit the USA, where will his talks with President trump, however, the timing of the Russian-American meeting at the highest level is still unknown.

In such conditions Russian suspicions will become a burden, resulting in administration of the tramp will not be able to offer a new policy towards Russia and in Russian-American cooperation will not change.

Presumably, the communion in July will also be fugitive

Russia and the United States before the inauguration of the trump probed the ground for the early holding of the Russian-American meeting at the highest level. For these negotiations, the parties discussed places such as Reykjavik, where in 1986 a meeting was held between Gorbachev and Reagan, as well as Slovenia, where born Melania trump (Melania Trump).

However, a source in American diplomatic circles said: “If you hold the summit now, the administration will criticize trump for what its relationship with Russia is a fact. The leaders of Russia and the USA, most likely, will not meet until the G20 summit, which will be held in July in Hamburg. Communication on the sidelines of the G20 summit is also likely to be fluent”.

January 28, presidents Putin and trump about one hour and talked on the phone, but this communication was not meaningful. According to the Russian side, the parties discussed the fight against terrorism, the situation in the middle East, nuclear forces, nuclear non-proliferation, Iran, the Korean Peninsula and the Ukraine as well as agreed to deepen the partnership.

In a statement, the American side said: “This is an important starting point to fix the Russian-American relations.” However, the heads of both countries discussed the summit and the weakening of the anti-Russian sanctions.

According to Secretary of state Tillerson, the April summit between the U.S. and China will define relations between the two countries for the next 50 years. Heads of state will have to discuss their spheres of influence. Trump also visited the Prime Minister of Japan Shinzo Abe and European leaders. President trump exhibited the Pro-Russian diplomacy on display, however, suddenly discouraged Russia was out of the equation.

Special Prosecutor to investigate the suspicions

This is due to the “rush the gate”, which spins Washington. Advisor to the President, Michael Flynn (Michael Flynn) was on the short leg with people in the Putin administration and in Russia received a huge lecture fees. It became known that before the inauguration of the trump he concluded a secret agreement on the issue of sanctions with the Russian Ambassador to the U.S. Sergei Kislyak. February 13, Flynn resigned.

U.S. attorney General Jeff Sessions (Jeff Sessions) is also twice met with the Russian Ambassador during the election campaign. Since he denied it, he was in an awkward situation.

The main question associated with the Russian suspicions is ordered if the headquarters of the trump of Russia to carry out a cyber attack on the headquarters of Clinton, in the midst of the election campaign. February 14 The New York Times reported that trump’s entourage were in close contact with Russian spies.

The democratic party has demanded to appoint a special Prosecutor to investigate these suspicions. Even the part of the Republicans supported this proposal. A special Prosecutor has unlimited powers. During the “Monica gate,” he prepared a detailed report, with the result that the house of representatives approved the impeachment of the President (Senate found him not guilty).

The democratic party is also exploring evidence that the Russian intelligence service has information about inappropriate behavior trump in one of Moscow’s hotels in 2013. If a special Prosecutor will be appointed, this is a blow to the administration trump. In addition, the FBI is also investigating contacts of participants of the electoral team with Russia and Pro-Russian authorities of Ukraine. Since February, the American media almost daily report new suspicions.

The transition to tough diplomacy against Russia

During the election campaign, trump called President Putin a great leader. He also criticized NATO, stressing that this unit is a relic of the time. Trump talked about the joint fight against terrorism and the abolition of anti-Russian sanctions of charting a new diplomatic course towards Russia. Nevertheless, relations with Russia became an obstacle in bringing about the reconciliation of speech does not go. On the contrary, diplomacy toward Russia is tougher.

EA Flynn, who stood at the helm of American diplomacy, was replaced by Lieutenant-General Herbert McMaster (Herbert McMaster), criticizing Russia for what she is trying to change the European order established after the end of the cold war. Secretary of state USA Rex Tillerson (Rex Tillerson), who were in close business relations with Russia, also began to speak about Russia harshly: “it is Quite natural that NATO countries are afraid of Russian expansion”.

One of American government officials demanded Russia to return the Crimea to Ukraine.

The former Governor of Utah Jon huntsman (Jon Huntsman), was appointed U.S. Ambassador to Russia and senior Director for Europe and Russia expert at the Brookings University Fiona hill (Fiona Hill) is also aggressive against Russia.

During a press conference on 16 February, the President, trump said: “with Russia will not be able to cooperate, but at least I’ll try.” Thus manifested his desire to change the policy towards Russia. Though trump often talks about strengthening the defense system and increase the nuclear potential, forgetting about the previous statements. Under pressure from Congress and the media he will not to change policy towards Russia.

Russian TV channels, which is floor control of the administration of Putin, after winning the trump in November last year, began to extol him, even more than the Russian leader, but after the resignation of Flynn hvalby trump disappeared completely.

The fact that the hopes for improvement in Russian-American relations during the administration of trump and avoiding isolation gave way to disappointment.

The Minister of foreign Affairs of Russia Sergey Lavrov expressed his negative attitude to the fact that the meeting of US attorney General Jeff Sessions with the Russian Ambassador considered a problem: “It’s like a witch hunt. Reminiscent of McCarthyism and the persecution of Communists in the early cold war period”.

The Russian newspaper also criticized: “In the United States is anti-Russian hysteria” (“Independent newspaper”). “Russia had no illusions about trump. Consequently, the loss of illusions can’t be”, — said the press Secretary of the President Dmitry Peskov.

In an interview with RIA Novosti Chairman of the Presidium of non-governmental organization “Council for foreign and defense policy” Fyodor Lukyanov said: “the Improvement of relations between Russia and the United States prevented the powerful anti-Russian forces in the United States, and the weak leadership of the administration trump. Given its instability and lack of ability to make political decisions, I do not think that the trump will offer a new policy towards Russia. Most likely, by inertia will continue anti-Russian course of the Obama administration. With the anti-sanctions also will not have any change.”

At the end of February in Moscow the conservative protesters gathered near the office of Russia Today with posters on which was written “stop to praise trump’s media, Wake up,” and so forth. This suggests that Russia has been freed from “the obsession of the trump.”

Initially, the Putin administration is beneficial to the relationship with the US was a certain tension. If Russian-American relations improve, sanctions will be lifted, and Russia will go from isolation, people’s anger will turn in the direction of falling living standards, corruption and bribery. The confrontation between Russia and the United States devoted to the views of Russians from domestic problems, providing stable power existence.

Despite the economic crisis, Russia’s defense budget has reached its limits, reaching in 2016 4.7% of GDP. The result of the disappearance of the illusion of trump heavy domestic and foreign policy situation continues, therefore, the confrontation with the United States will be for the Russian authorities is very painful.