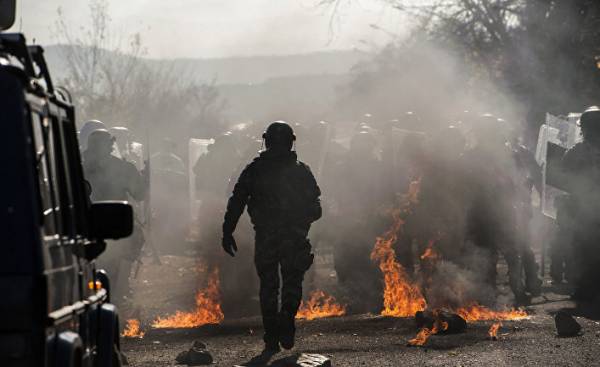 Visby (Sweden) — the leaders of the European Union suddenly come to understand the new realities in the Balkans. At the last summit they emphasized the need to expand the activities of the EU in maintaining stability in the region, as well as to repel Russian influence.

However, the geopolitical situation in the Balkan countries was not supposed to be a surprise. Faults arising after the death of the old Ottoman Empire a century ago and which stretches from the town of Bihac in the North-West corner of Bosnia to the city of Basra in the Iraqi Persian Gulf coast, had been constantly a cause regional and global instability.

When the end of the First world war collapsed the Empire of the Habsburgs and the Ottomans, attempts were made to create the Balkans of the modern nation-state, despite significant national and cultural differences in the region. Since then, nationalism regularly comes into collision with the continuing mosaic of civilian life in the region, causing conflicts one after the other.

As national state founded in the Levant and Mesopotamia, Yugoslavia was created in order to cope with these political controversies; however, the brutal crime — in Smyrna, Srebrenica, Sinjar, and so on — remained an integral feature of post-Imperial life.

In the beginning of 1990-ies Yugoslavia broke up, which triggered a decade of brutal wars, from Croatia to Kosovo. After the appearance of seven new (and often hostile to each other) States, it became clear that regional stability must rely on a new structure, namely the European Union. Before the EU had successful experience on the resolution of protracted ethnic conflicts, faced the challenge to build bridges in a region plagued by longstanding nationalist contradictions, and resolve ethnic conflicts.

The participants of the EU summit in Thessaloniki in 2003, has vowed to involve all Balkan countries in their Union as full members. This promise was very important to do, but just as hard to fulfill it. When acute problems of the Balkans subsided, the EU leaders decided that has guaranteed peace in the region. And since the familiar approaches to the Balkans, in fact, meant maintaining the status quo.

After his appointment as President of the European Commission in 2014, Jean-Claude Juncker confirmed the status quo, stating that during his five-year term in office, any extension of the EU will not. From a technical point of view, the statement Juncker was correct, but political — it was a disaster. Gone is the light that has guided the reform and integration efforts, and quite predictable in the region started to gain momentum again nationalism. Meanwhile, the EU has been too preoccupied with their current financial problems, such as debt crises in member countries.

I spent a lot of time in the Balkans in the years after the Bosnian war. I was the EU special representative in the former Yugoslavia, then as a co-chair of the Dayton peace conference, high representative for Bosnia and Herzegovina and, finally, the special envoy of the UN Secretary General in the Balkans.

Last year, when I came back to Bosnia already informally, someone suddenly asked me, not will there be war again in the region. At first I shrugged off this question. “Absolutely impossible,” I replied. But then the same question I began to ask other people. And on the fifth time, I’m alarmed.

Of course, I was right in saying that war of the 1990-ies will not return: the circumstances today are very different from those that was then. But how many times we’ve seen before, private hot heads can ignite the fire that will be difficult to repay. A long time ago in Sarajevo, a man named Gavrilo Princip triggered world war by killing the Austrian Archduke Franz Ferdinand. And today, when the region is gradually becoming more explosive, someone might ignite a new spark, this time may in Skopje.

So, what to do? The only way forward for Europe is to use its deterrent force at the same time speeding up European integration. In order to address new threats in the Balkans, the EU must demonstrate that it has the will and means to act: rapid reaction force EU (EU Battle Groups) needs to hold military exercises in the region. This is a powerful signal that the armed forces of the EU is not a paper tiger, and that the EU can use not only the words.

Further EU enlargement is also essential. So far only Slovenia and Croatia joined the EU, so the granting of membership to the rest of the Balkan countries will obviously take time. However, the reforms needed to bring these countries into compliance with the norms of EU membership, can and should be accelerated, with intermediate milestones and with the support of the region’s population.

For example, we need to duplicate the EU’s Eastern partnership, creating a Balkan partnership, but while keeping on the table the option of full EU membership. At the same time, the EU must increase its political activity in the region. You can start with mediation in the ongoing small border disputes, so that, left unattended, they worsened.

In modern parlance, the EU has a broadband problem. In recent years, the number of his difficulties multiplied, like summits, which are held for their decision. But in the Balkans among European leaders the choice is simple: either they will solve this problem or they will wait until this problem will solve them all.