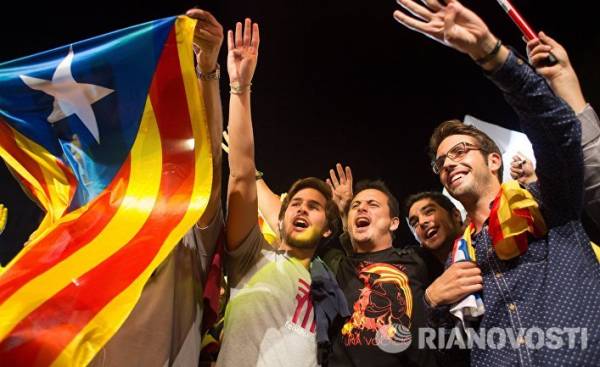 Constantly faced with new challenges Europe has to develop a common course, with varying degrees of success in overcoming emerging obstacles. The European Union desperately needs the stability that would give him the opportunity to grow. First of all, to answer Pexit is the biggest challenge facing the process of European integration. The British government has been willing to use article 50 of the Lisbon Treaty and begin the process of negotiations with Brussels on Britain’s withdrawal from the EU. This is a difficult process that can last at least two years.

This raises new challenges that directly affect the strength of the EU. As predicted, political irresponsibility, which came to everything that was connected with PACSICOM, results in a number of internal problems. Scottish nationalists demand new referendum on independence, but have been only three years since, as the majority of the population voted to remain part of the United Kingdom. And in our country, supporters of Catalan independence have made efforts to secede from Spain, in violation of the law.

Due to historical, cultural and legal reasons, the processes in Scotland and Catalonia do not have anything in common. But the advocates of secession of Catalonia and Scotland are United in their intention to remain in the EU. That is why Brussels can’t sit back and calmly observe what is happening. It needs to be active.

For this reason the EU legislation quite clearly States that any territory that comes from the current member countries of the European Union are automatically out of the EU. As for joining the EU, the breakaway region will have to apply and go through the whole procedure again in accordance with established standards, and it’s a long, slow and complicated process. Trying to fool its citizens, Catalan politicians have resorted to lies and promise them the opposite.

The first Minister of Scotland Nicola Sturgeon (Nicola Sturgeon) plays on the feelings of the Scots, demanding to hold a new referendum on independence from the United Kingdom in 2018. However, she refers to the fact that if Scotland separated from England before the completion of Breccia, it will be impossible to withdraw Scotland from the EU.

The largest in the last decade the economic crisis has created the perfect conditions for actions of populists of all stripes. And in the muddy water of the secessionist movement in Europe has gained many supporters, that is largely due to the understandable dissatisfaction of citizens. But Brussels needs to fulfil its function, namely, to strengthen political stability. The only way to achieve deeper integration within the EU, thanks to which Europe could provide itself with a long period of peace and prosperity in history. On this basis, you must make it clear that within its jurisdiction, the EU will not allow the change of national borders. And not only in response to separatist aspirations in the United Kingdom and Spain, but also in order to put a limit on the way to the insane attempts of the Department, ongoing separatist movements in Alsace, Savoy, and Wallonia, Corsica and many other places on the continent.

If you do not take into account the false arguments, as we have said, between the processes taking place in Catalonia and the Basque country, very little in common. The independence referendum in Catalonia is illegal. The Spanish Constitution, like other countries, does not provide for such procedures. In order for such a referendum would ever take place, you need a parliamentary majority, confident in the necessity of amending the Basic law of the country. And then this law must obtain the approval of the Spanish people, and is the carrier of national sovereignty. Trying to make the current ruling class of Catalonia, constitutes a violation of the constitutional order and the real blow to democracy, and said on Sunday gathered at a rally in Barcelona on 15 of thousands of Catalans speaking for freedom and being in the same state.

In Scotland, indeed, held a referendum and is now talking about convening a new. The fact is that British law allows it. In the United Kingdom has no Constitution. And the autonomy law of Scotland authorizes the holding of such referendums, which should be agreed between London and Edinburgh before final approval by the British Parliament. In Catalonia want to break the law, in Scotland it is always kept. Let’s see how will Theresa may out of the impasse in which she was due to Breccia. But in any case, Sturgeon has to stop making false assurances regarding continued stay in the EU. It certainly is not within the scope of its competence.