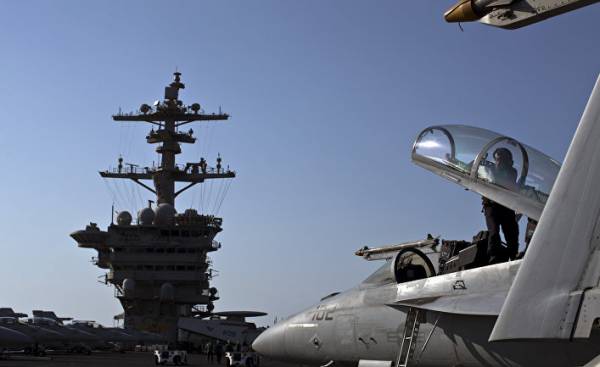 Carriers from 1940-ies are the main warships of the naval forces, and still they remain a key indicator of modern sea power. But with the advent of aircraft carriers naval forces immediately began to develop plans for their destruction. The details of these plans has changed over time, but the principles remain the same as before. But some argue that with the advent of new military technology, mainly the result of Russian and Chinese innovation, the balance of power has changed irrevocably, and carriers began yesterday.

So what should you do if we decided to sink the aircraft carrier? What it is means?

17 September 1939 the German submarine U-29 torpedoed and sank the British ship “Corages”. It was the first aircraft carrier, destroyed by submarine attack, but not the last. During the Second world war, the United States, Britain and Japan in the attacks of the submarines sank a lot of ships, and the culmination of submarine warfare was the destruction in 1944, a giant Japanese aircraft carrier “Shinano”.

Submarine-launched torpedoes remain the biggest threat to modern aircraft carriers. Russian and Chinese submarines regularly work out the elements of the attack on the American carrier battle group. The same is done by the sailors of the countries-members of NATO and their allies. A modern torpedo can explode under the ship, damaging its bottom the most dramatic effects. But luckily, torpedoes are never struck by large ships such as American supereminence, while in the U.S. Navy in 2005 held a series of such tests, using as the target the aircraft carrier “America”. These tests, which undermined the deep bombs like the one that has damaged the American ship “Cole” has not led to the destruction of “America” and she was subsequently flooded. No one actually knows how many torpedo strikes can withstand the American aircraft carrier before you go to the bottom. But we can confidently say that even a single torpedo can inflict serious vehicle damage and to prevent its further action.

In 1943 the Germans used a guided bomb to destroy the Italian battleship “Roma”. Soon these bombs came self-propelled cruise missile that could launch from an aircraft, ship, submarine and land-based installations. During the cold war, the Soviets developed a huge amount of platforms to launch cruise missiles against aircraft carrier shock groups, from small patrol boats to strategic bombers in a strong battle formation.

Today, armed with China, Russia and some other countries there are a variety of cruise missiles, able to strike at the American carrier battle groups. These missiles have different ranges, speeds and routes of convergence with the target. But the most modern of them flying on a large (often supersonic) speed and have a low radar signature. Information about the effectiveness of cruise missiles (and torpedoes) against modern large aircraft carriers are virtually absent. Ships of smaller size kept them from falling as civilian tankers, similar in size to a heavy American aircraft carrier “Gerald R. Ford”. However, even non-lethal hit cruise missiles can seriously damage the flight deck, and this will prevent the flight of carrier aviation if any, will deprive it of the ability to perform take-off and landing.

The most important achievement in the technologies for dealing with carriers over the past decade anti-ship ballistic missiles. Chinese “Dongfeng-21” is able to strike at the American carriers, with a hitherto unimaginable range, and create a threat to overcome existing air defense assets of the enemy. In the terminal phase of flight the missile can maneuver, approaching at high speed from a moving aircraft carrier. One only of the kinetic energy of this missile is enough to severely damage the flight deck, to cripple or even sink a carrier.

With the advent of missiles, “Dongfeng-21” U.S. Navy had accelerated to create their own missile defense systems. But the ability of the American aircraft carrier groups to confront the powerful volley of such missiles is a big question. The development of anti-ship ballistic missiles more than anything else forced the U.S. Navy to reconsider the role of aircraft carriers in the war of high intensity.

The increase in costs

New aircraft carriers CVN-78 “Gerald Ford” cost about $ 13 billion, and that doesn’t include the price of carrier-based aircraft. If you count the cost of the F-35Cs, F/A-18E/F aircraft and various auxiliary facilities, the price will be just mind-boggling. And when you consider the escort ships, without which the carrier will not do, the numbers will grow even more. As the construction of new vessels the rate of cost decreases, but for the construction of CVN-78 take so long that each new carrier appear all the more modern samples of military equipment, like ships of the type “Nimitz”.

Over the last 30 years in the USA had different attitudes to the growth of defense spending. Contact the trump quite a strange approach, combining higher costs and a strategy for savings. If the austerity course continues, to maintain military spending at the proper level will be harder. At some point the military use of an aircraft carrier will lose its importance due to rising costs for construction, maintenance, repair and operational use of the ship and its carrier-based aircraft.

On the side of caution

Maybe China and Russia won’t need to heat the carrier to bring this species to extinction. All of the above factors such as weapons systems for the destruction of aircraft carriers and the cost of the ships themselves, could eventually produce excessive caution and prudence in their application. In the event of a conflict, the American Admiral and the President are so scared of the vulnerability of aircraft carriers that decide to refrain from their aggressive and decisive application. The huge cost of aircraft carriers was their most significant failure. They are too valuable to lose, and therefore, the carriers can remain on the sidelines of the conflict of high intensity with equal force to the enemy.

But if the carriers will not contribute to the serious conflicts facing the United States, how you can justify the cost required to build and protect? This fact more than anything else will lead to moral obsolescence of this class of ships and will put an end to aircraft carriers as the indicator of the power of the state.

Does this mean that the carriers as a class of ships become obsolete? No. China and Russia are so hard working to create weapons systems for the destruction of aircraft carriers owing to the fact that they are, in the opinion of these countries pose a great threat to their security. Moreover, China and Russia to establish and adopt many new system just due to the fact that carriers have effective means of countering weapons. Finally, China began to establish their own carriers. The PLA will soon have the second largest carrier in the world.

However, aircraft carriers are threatened by the very real danger of the advanced military technology. And the biggest threat is in the procurement process. If the United States fails to curb rising costs for the construction of these ships and their carrier-based aircraft, Aviastar will be very hard to retain its place in the overall architecture of the defense policy of the United States.

Robert Farley often publishes their own material in The National Interest. He is the author of The Battleship Book. Petersenovskaya Farley teaches at the school of diplomacy and international trade (Patterson School of Diplomacy and International Commerce) at the University of Kentucky. His work includes military doctrine, national security, and Maritime Affairs.